skip to main content
Return to Fordham University
You are at:Home»Faculty Profiles»Amy Roy: Unraveling the Science of Temper Tantrums

Temper tantrums: those dreaded displays of distress and defiance that can spike any parent’s blood pressure. They’re bad enough when they happen during the terrible twos, but what happens when tantrums last until children are 8 or 9 years old? 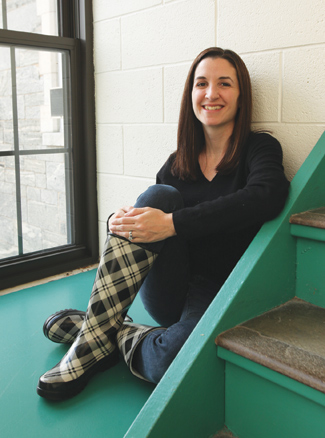 “Severe temper tantrums go beyond typical tantrums in that they’re longer in duration and happen more frequently than they should,” said Roy, who joined the Fordham faculty in 2011 after nearly a decade with New York University’s Child Study Center.

“Tantrums are pretty common in toddlers and preschoolers, but by the time kids are 5 or 6, they should be able to pull it together. So even if they get upset, it should last a minute or two. If tantrums typically last longer, like 15, 20, or 30 minutes, then we become concerned that the neural circuitry needed to regulate emotions has not fully developed.”

Funded by a National Institute of Mental Health research grant, Roy has been collaborating with researchers at the NYU Child Study Center to study children who have severe tantrums. Roy and her team interview the children and their parents to get a full picture of the child’s emotional and behavioral concerns, then use functional magnetic resonance imaging to understand what, neurologically, may be interfering with their ability to control emotions.
First, though, the children get to do a trial run.

“We conduct a full assessment and determine a diagnosis. Then at the end of the session the kids do a practice MRI in one of the mock scanners we have here at Fordham and at NYU,” Roy said. “The mock scanner looks and sounds like a real scanner, but there’s no magnet. We use games and videos to teach the kids how to lie still and to help them overcome any fears of going into this big tube.”

By pinpointing the neurobiological causes of emotional lability, the team hopes to develop more targeted treatments for children with these concerns and refine the techniques that their parents can use.

“We first did a study of these children a few years ago and found that a lot of them had anxiety. If your child is having a tantrum because he’s anxious, then he is thinking something different than if he’s angry, so you should approach him differently,” she said. “Not all kids are the same, and these tantrums come from different places, so treatments should be tailored to what’s exactly going on.”

Last year, Roy received a Fordham First Year Faculty Research Grant. Her team used the funds to distribute video cameras to the parents, who record tantrums to share with the research team.

“Before, we were relying fully on parent [testimony]. We asked them what are the behaviors they see, how long do they last, etc. But how easy is it really for a parent to gauge? When the child is screaming, it could feel like 20 minutes when it is actually two,” Roy said.
Roy said that parents appreciate the feedback they receive from researchers based on the videos. She hopes to turn the Fordham research grant project into a funded grant that examines similar video-based interventions.

In addition to studying emotion regulation in children, Roy is also part of a research team that has debunked the theory that teenagers engage in risky behaviors because they are thrill-seekers. The team, which comprises researchers from NYU’s Center for Neural Science and Yale University’s School of Medicine, found that teenagers are more likely to take risks because they have a higher tolerance for uncertainty.

“Most things we face every day are ambiguous. We rarely know the exact risk of anything we do. For instance, in skydiving, we don’t numerically calculate the risk that the parachute is not going to open. It’s ambiguous,” Roy said. “Adolescents can tolerate that ambiguity. They’re OK with not knowing what their chances are. But adults don’t like that—they want to know their chances.”

From an evolutionary standpoint, Roy said, this tolerance for uncertainty may be important.
“Adolescence is a time when you have to get out and explore…. So you need to be tolerant of not knowing what the outcome of a situation is going to be, or else you’d never try new things,” Roy said.

The team’s findings, which were reported in an October issue of Proceedings of the National Academy of Sciences, could be helpful when it comes to communicating with teenagers and even improving programs, such as D.A.R.E. (Drug Abuse Resistance Education), that educate teenagers on risks.

“With regard to designing interventions or preventative interventions, there are things we could be doing better,” Roy said.

A mother of two young boys, Roy said that being a parent helps her to identify with parents who come through her research lab.
“
What it has shown me is how unbelievably hard it is to do all the things we ask parents to do when their child is upset. We need to take this into account when we work with our families,” she said.