skip to main content
Return to Fordham University
You are at:Home»Inside Fordham»Ambassador Sees South Africa as Role Model for Continent 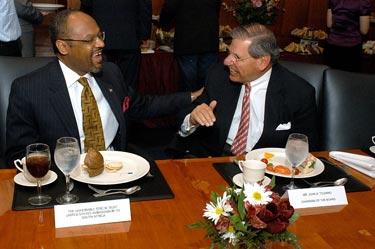 The nation of South Africa, just 14 years into its democracy, can function as a springboard for the rest of the African continent, its United States ambassador told a group of Fordham students and faculty poised to visit the developing nation.

The ambassador, Eric Bost, spoke to members of Fordham’s Global Outreach (GO) program, the College of Business Administration’s (CBA) study-abroad program and the International Political Economy and Development (IPED) program at an April 28 luncheon on the Lincoln Center campus.

GO will take 10 students to South Africa in May on a service trip; a group of 20 CBA students will visit the nation next March as part of the three-credit course in global economics.

“This is a nation that has made tremendous progress only years out from apartheid,” Bost said. “When you see what is going on in Zimbabwe, you’ve got to understand how precious is democracy.”

Bost, who has served at the top of the 1,000-member U.S. Embassy—the continent’s largest—since July 2006, recapped his efforts to improve the lives of South Africans while strengthening relationships between the American and South African governments and business communities.

He told students that the United States is viewed abroad as an arrogant nation, and that all Americans, including the visiting students, will have to help erase that perception.

Under Bost’s leadership, the United States has increased funding from $250 million to $600 million to curtail the spread of HIV in South Africa, making it the largest health-related program that America funds in the world, he said. With roughly 12 percent of the South African population infected with HIV; Bost said the disease “adversely affects every single aspect of life in the country.”

“These programs are at the core of helping people move from poverty to self sufficiency,” Bost said.

Joseph M. McShane, S.J., president of Fordham, who introduced Bost, said that fostering a relationship between the African nation and Fordham would help students comprehend the issue of justice as it unfolds in an emerging democracy.

“It was a country of oppression that has become a radiant example of the triumph of the human spirit, and it is a grace to have lived to see it,” he said.
L
auren Hardisky, a Fordham College at Rose Hill sophomore who will be going to South Africa with CBA, said that the ambassador’s talk helped give an idea of what American businesses can do to foster meaningful relationships. In particular, Bost noted that Africans don’t just “shake hands on it” but require more discussion, patience and persistence to seal business deals.

“To know of the cultural subtleties ahead of time really helps,” Hardisky said. “Africa is the future.”

Also in attendance at the luncheon, which was sponsored by the Office of the President, was Fikile Magunbane, counsel general from South Africa.