skip to main content
Return to Fordham University
You are at:Home»Inside Fordham»After a Month, a Remembrance 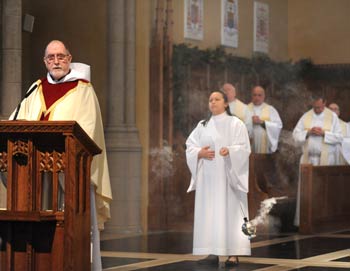 Fordham University commemorated the life of Avery Cardinal Dulles, S.J., with the celebration of a Month’s Mind Mass on Jan. 12.

Scores of friends and admirers attended the early afternoon Mass, which was held at the University Church on the Rose Hill campus. In keeping with tradition, the special service occurred one month after Cardinal Dulles’ death at age 90.

Joseph M. McShane, S.J. president of Fordham, thanked them for coming together at the end of the monthlong mourning period to pray for Cardinal Dulles, whom he called a dear friend, brother and mentor.

“As we do so, we know that he has spent his first Christmas in heaven, something that he looked forward to, that he spoke of often in the last year of his life,” Father McShane said.

In his homily, Patrick Ryan, S.J., vice president for University mission and ministry, drew upon the readings of the Mass—Deuteronomy 30:15-20 and Ephesians 1:3-10, as well as the Gospel, John 1:35-39—to show that Cardinal Dulles was part of a long line of men who heard the call of God and accepted the challenge to answer it.

Cardinal Dulles’ path in his early years was particularly inspiring, Father Ryan said. He went from an atheist at Harvard University to a deist, deist to Catholic, and then after several years in the Navy, membership in the Society of Jesus.

“He chose life, loving the Lord his God, obeying him and holding fast to him, and that meant life for him, and length of days,” Father Ryan said. 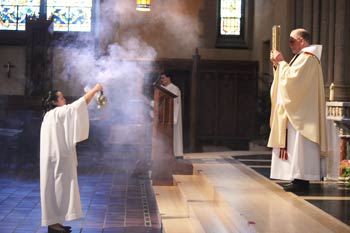 A Month’s Mind Mass is a special service held one month after someone’s death.

He noted that the Gospel of John was particularly instructive for Cardinal Dulles, as it entailed an encounter in which Jesus confronts two disciples following him, asking, “What do you want?” Sheepishly, they could only ask where he was living, to which he replied warmly, “Come and see.”

“On a February afternoon 70 years ago, Avery Dulles began to hear the Lord’s question. He began to come and see,” Father Ryan said. “He began to find out what he was looking for. Now, at long last, he has found where the Lord is staying.”

Jenny Portillo (FCRH ’11) was in attendance last fall at Cardinal Dulles’ final lecture as the Laurence J. McGinley Professor of Religion and Society at Fordham. An English/history double major with a concentration in American Catholic studies, Portillo served as an usher at one of the Masses for Cardinal Dulles that took place at the University Church in the days following his death.

Margaret Hughes, a third-year philosophy student in the Graduate School of Arts and Sciences, paid her respects at the Month’s Mind Mass.

“Cardinal Dulles has been such an admirable and solid presence at Fordham for so long, so I came out of gratitude for his life,” she said. “Many times over the past month, I’ve talked with people 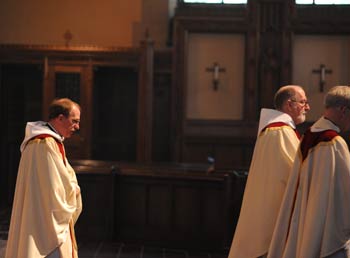 Joseph M. McShane, S.J., president of Fordham, follows the recessional out of the University Church.

about his final lecture, and particularly the end of the lecture, how he talked about how he was entering a new phase in his life, when he identified very closely with the cripples in the Gospel.”