skip to main content
Return to Fordham University
You are at:Home»Inside Fordham»Accounting Aficionado Finds a Home at CBA

Sometimes New York City provides the background in a story about a person’s success. For Erica Berglind, 22, the Big Apple is the supporting player to her heroine. 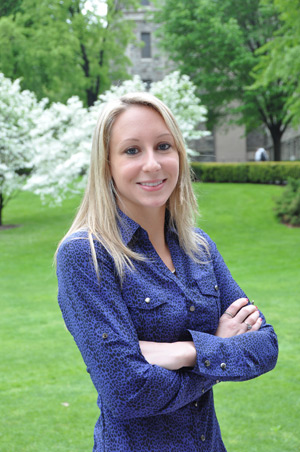 Erica Berglind chose Fordham because it was the only university in New York City that had a “real campus.”
Photo by Gina Vergel

Shortly thereafter, she will start a new job with PricewaterhouseCoopers (PWC), which made her an offer in the summer of her junior year.

That will mark the beginning of a career that she always envisioned.

“I fell in love with accounting in high school; I knew that’s what I wanted to do and that I wanted to study and work in New York City,” said Berglind, who was born and raised in Massachusetts and graduated from high school in New Jersey.

When taking campus tours in Manhattan, she focused on Fordham in the Bronx because it was, as she said proudly, “the only university that had a real campus” yet was only a train ride away from New York City’s financial sector.

“There’s also a real sense of community here,” she said.

Berglind credits part of her success to three activities that she honed at Fordham. She is actively involved in Beta Alpha Psi, the accounting honor society in which she held an officer position this past year; she has been a resident assistant since her sophomore year and, perhaps most importantly, Berglind said, she learned the art of networking—a mandatory skill in the city that never sleeps.

When asked if she could offer advice to incoming CBA freshmen, Berglind had plenty:

“Get involved. Fordham offers plenty of opportunities to build leadership skills such as United Student Government, the Rose Hill Society and various clubs,” she said.

“Build and maintain relationships. Don’t just show up and do well in the classroom. Get to know the professors because they are the best resources,” she added.

Try to attend the many networking events that CBA provides to its students, Berglind said. “I was horrible at networking when I went to my first event. I didn’t know what I was doing, but that’s because I needed to practice. Today, when I talk to recruiters, it’s like I’m interviewing them.”

She crafted quite the success plan by following her own advice. She has interned or participated in leadership programs at each of the “Big Four” accounting firms since the summer of her sophomore year. That experience steered her toward joining PWC.

“Everyone advised me to pick a firm based on the people, but the people were great at each of the Big Four,” Berglind said. “I knew I wanted to work with clients in media and entertainment, and PWC has a lot of clients in that sector.”

Berglind acknowledges that her focus could change. She hasn’t ruled out following in the footsteps of her favorite mentors—Rosa Romeo, director of undergraduate accounting and the faculty adviser to Beta Alpha Psi and the Fordham Finance Society; and Barbara Porco, Ph.D., assistant professor of accounting and taxation.

“They are both CPAs who worked at one of the Big Four before going into academia,” Berglind said. “I could see myself wanting to do something similar.”

Going by Berglind’s track record for completing what she has set out to do, Fordham had better be ready.