Fordham College at Rose Hill (FCRH) is an outstanding liberal arts college firmly rooted in the Jesuit educational tradition. Its current strengths are evident in the high quality of its faculty; the outstanding record of students in gaining admission to distinguished graduate and professional programs; the rising qualifications of entering classes; the vibrancy of its integrated learning communities; its Honors Program; its engagement with the resources of New York City; and a rigorous core curriculum. 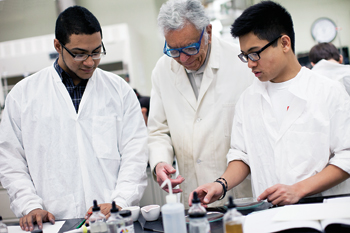 In accordance with the University’s strategic plan, over the past academic year the college’s efforts have focused on four primary and overarching goals. These are:

• To advance the college’s commitment to University mission, resources, and planning.

• To enhance programs for its most gifted and motivated students.

• To infuse the academic curriculum, faculty, and culture with new energy and quality.

• To advance the recruitment, advising, and retention of FCRH students.

In each area the college made significant progress by creating programs, engaging faculty in curricular and pedagogical innovation, renovating facilities, and improving student advising.

To promote and support the University’s mission and to provide support for its activities, the FCRH dean collaborated with the Jesuit Community and the Office of University Mission and Ministry to inaugurate a new Arrupe Seminar for Rose Hill faculty and staff. Over the course of the year, members read texts in Jesuit history, spirituality, and educational philosophy, and discussed them together along with guest speakers from Fordham’s Jesuit Community. Led by John Cecero, S.J., and Father Tony Harris, this provided a valuable opportunity for Fordham staff and faculty to reflect on the way that they live the mission of the University in their daily work with colleagues and students. In the coming year, the Arrupe Seminar will be continued and expanded to include a larger cohort of faculty. The college strengthened its mission-related work in its integrated learning communities as well, and particularly in the Manresa Program, where FCRH staff collaborated with Campus Ministry to offer an expanded series of retreats, colloquia on faith and reason, and service-learning opportunities. The college now looks forward to further initiatives in this area.

In 2011-2012, the college started a strategic planning process. In these preliminary stages, the dean engaged the faculty on the College Council, students on the Dean’s Academic Council, and alumni on the Board of Visitors in discussions of the University’s strategic plan, the recent assessment of it by the committee led by Brian Byrne, Ph.D., and the president’s response to that assessment. In the coming year, the dean will work closely with the faculty serving on the Dean’s Budget Planning Committee to define core objectives that are consonant with the University’s established goals and set out a clear vision for the college.

Programs for Most Gifted and Motivated Students

The College continued to expand its efforts in undergraduate research, seeking to make it an integral part of the college’s academic culture, and providing students with the resources to discover hidden talents, discern new interests, and distinguish themselves as they prepare for professional life. During the past academic year, funding supported 128 student projects and totaled $376,000, a 24 percent increase over last year’s amount. The FCRH Undergraduate Research Symposium grew dramatically to involve 274 students from across the academic disciplines, a 41 percent increase. Along with the publication of the second issue of the Fordham Undergraduate Research Journal, FCRH students also gained substantial external recognition by co-authoring 15 articles in professional journals, delivering or co-authoring 26 presentations at regional and national conferences, and winning seven competitive research internships.

The FCRH pre-professional advising programs for the health professions and the law remain centers of excellence as well. The admission rate for health professional schools for fall 2012 is 83.3 percent. The college also implemented a new pre-law advising program, including a first-year symposium and activities integrated across the undergraduate experience. Here, too, the results are extraordinary. The overall acceptance rate for any student or alumnus who applied for fall 2011 law school entry is 78.9 percent, very respectably higher than the national average of 71.1 percent. When segmented out, the Class of 2011 acceptance rate was a remarkable 95.3 percent (41 of 43 students). To date, the result for the Class of 2012 applicants who have made use of FCRH advising resources is a perfect 100 percent (68 of 68 students). Large numbers of these students also gained admission to prestigious, top 14 law schools, some of them with very competitive scholarship awards.

FCRH has remained committed to the success of its integrated learning communities (ILCs) as well. In Queen’s Court, Campbell-Salice-Conley Halls, the Science Integrated Learning Community, and the “West Wing” in O’Hare Hall, FCRH faculty and theOffice of the Dean’s staff led a large number of colloquia, excursions, and retreats. Through the Manresa Program, FCRH faculty taught eight freshman seminars, served as academic advisors, and engaged a community of 160 students in a broad range of activities throughout the year. For the first time, Manresa also included commuter students, a step that opened the ILC experience to a wider population.

The College also continued its efforts to advance the sciences, particularly in terms of interdisciplinary programs, improvements in pedagogy, and the renovation of facilities. Faculty from the departments of psychology, biological sciences, and computer and information science were led by Donna Heald, Ph.D, associate dean, in the creation of a new major in integrative neuroscience, which will be of great interest to students in the life sciences as well as those seeking careers in the health professions. The college also provided opportunities for faculty in biological sciences, chemistry, and physics to attend pedagogy conferences, learn from colleagues at other institutions, and apply for resources to secure instructional equipment. This has allowed for improvements in introductory laboratory courses, a process that the college is committed to promoting and sustaining. Fordham’s partnerships with The New York Botanical Garden, the Albert Einstein College of Medicine, and the Wildlife Conservation Society/Bronx Zoo also gave students valuable research experiences and provided resources to extend the college’s science curriculum.

Study abroad has continued to grow, with 279 FCRH students participating during 2011-2012, an increase over the 255 participants of the previous year, and the 224 in 2009-2010. FCRH also played a leadership role in the creation of Fordham’s first service-learning study abroad program in Pretoria, South Africa. The result of a collective effort among Fordham, the University of Pretoria, and the Jesuit Institute (South Africa), the program combined academic coursework, service projects, community living, and spiritual reflection. Starting in January 2012, students took a dedicated course in the history of modern South Africa, enrolled in three courses at the University of Pretoria, worked at local service sites, including a school and a women’s shelter, and benefited from spiritual direction provided by the Jesuit Institute. The program was a remarkable success, receiving high praise from its students and its South African partners.

The 2011-2012 academic year was a very good one for Fordham College at Rose Hill and its students. The College now seeks to build on this progress to help gain the external recognition it deserves, recruit outstanding faculty and students, enable its students to realize their full potential, and advance the University’s broader mission.

Prestigious fellowships and awards: 43
compared to 53 and 39 in the two previous years, respectively