Fordham College at Lincoln Center is an excellent liberal arts college with distinguished programs in the fine and performing arts. It can boast of two Marshall Scholars, 11 Clare Booth Luce Scholarships for Women in Science, 26 Fulbright Fellowships and numerous other prestigious fellowships since 2000. Eight of the 32 dancers in the Alvin Ailey American Dance Theater are graduates of the Ailey/Fordham BFA in Dance. The class that just completed freshman year had the lowest acceptance rate of the three traditional undergraduate colleges of Fordham, 39.5 percent. Members of that class were born in 30 different countries and 40 percent represented minority populations. 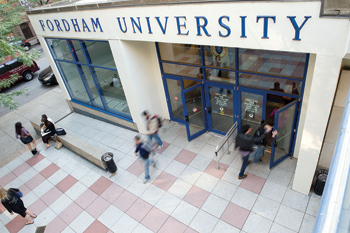 The academic year 2011-2012 was an important year in the history of the college with many impressive achievements:

• An increased presence for FCLC in the Lincoln Square neighborhood

• Revitalization of the college’s economics program

• Maximizing the efficient use of limited space in Lowenstein

An Increased Presence for FCLC in the Lincoln Square Neighborhood

During the last academic year, FCLC began a relationship with the Rubenstein Atrium of Lincoln Center for the Performing Arts. Last August, the Fordham Alumni Theatre Company performed an evening of song entitled “A Night Under Galileo’s Stars.” The atrium was filled to capacity with a waiting line down Broadway. This was followed in October by a celebration of Poets Out Loud’s 20th anniversary at the atrium, with songs composed by Lawrence Kramer (English) and a poetry reading by J.D. McClatchy. Once again, the atrium was filled to capacity.

With funding from the National Endowment for the Arts (NEA), the Ailey/Fordham dancers were able to perform in schools around Manhattan. The NEA grant allowed for the restaging of “The Four Temperaments.” In February, a special performance was held at the Ailey Citigroup Theater for students from St. Aloysius Middle School in Harlem, Cristo Rey High School in East Harlem, and Xavier High School in Chelsea.

In the coming year these efforts will be continued. In November, the Ailey/Fordham dancers will perform at the Rubenstein Atrium.

The Department of Economics has approximately 80 majors, making it one of the top 10 majors in the college. In addition, there are approximately 15 majors in the Mathematics/Economics program. FCLC introduced a business minor approximately 10 years ago; the current year was the first full year of a pre-business program, directed by economics lecturer Michael Buckley, who spent many years with Chemical Bank and J.P. Morgan Securities. The pre-business program is open to any students in FCLC regardless of major. Much like a pre-law program, it is designed to provide speakers from the business world, preparation for standardized tests, and advice on career paths and choice of graduate schools. There are about 50 active members of the pre-business program. The program will also be actively promoting the Master of Science in Business Enterprise offered by the Graduate School of Business Administration, a one-year program designed for liberal arts graduates interested in pursuing a business career.

Academic year 2011-2012 saw the successful completion of the first cycle of courses for the minor in international humanitarian affairs. The capstone of the minor is a year-long set of two courses with a foreign service trip during the January break. The country studied and visited this year was Nicaragua.

Other opportunities for international students included a spring-break study tour to the Universidad Javeriana in Bogotá, Columbia; a Theatre Department-sponsored study tour during the January break to the Moscow Conservatory in Moscow, Russia; and a June 2012 study tour to China

FCLC and The Juilliard School have developed an excellent working relationship. A milestone was reached in the fall 2011 semester when, for the first time, four Fordham students were allowed to cross-register at The Juilliard School, and in the spring semester, Bill Baker, Ph.D., the Claudio Acquaviva S.J. Chair and Journalist-in-Residence in the Graduate School of Education, taught a joint Fordham-Juilliard course for the third time: The Business of the Performing Arts in the 21st Century. In fall 2012, FCLC will have its second liberal arts faculty exchange with Juilliard. An FCLC historian will teach a course at Juilliard and a Juilliard historian will teach a course at FCLC. All of these activities are revenue neutral.

The FCLC relationship with The Ailey School has matured over the years and has flourished even as Ailey underwent a complete change in leadership: Melanie Person has replaced Ana Marie Forsythe as co-director of the BFA program; Tracy Inman has replaced the late Denise Jefferson as director of the Ailey School; Robert Battle has replaced Judith Jamison as artistic director; and Sharon Luckman, executive director, has announced she will step down next spring. Despite all these changes the BFA program is flourishing with a total of 99 students enrolled this year.

Prestigious fellowships and awards: 27 compared to 13 and 12 in the two previous years, respectively