skip to main content
Return to Fordham University
You are at:Home»Fordham Magazine»Features»Yes, Virginia: A New Yorker’s Lifelong Faith in the Spirit of Christmas
Ambassador of Christmas: Young Virginia O’Hanlon (above left), circa 1897, went on to earn a doctorate at Fordham in 1930 and later became an assistant principal in the New York City public school system. A grown-up Virginia poses next to the Christmas tree in her home on December 21, 1945. (AP Photo)
It was September 1897, and 8-year-old Virginia O’Hanlon’s friends on Manhattan’s Upper West Side had just confronted her with the grim possibility that Santa Claus did not exist. At the urging of her father, she wrote to the New York Sun: “Please tell me the truth, is there a Santa Claus?”

The paper’s lead editorial writer, Francis P. Church, a 58-year-old journalist who’d been a Civil War correspondent, received O’Hanlon’s handwritten note from his boss. He reportedly “bristled and pooh-poohed” when asked to respond. Yet he quickly crafted a 417-word reply (first published anonymously) that has moved millions of people, becoming “history’s most reprinted newspaper editorial.” 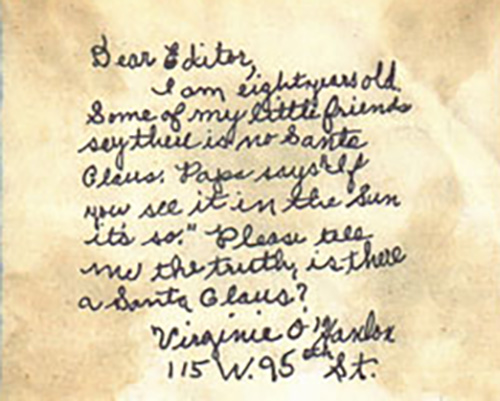 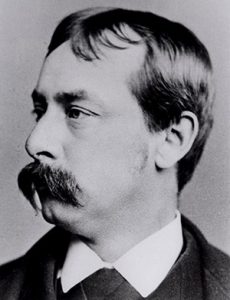 “Virginia, your little friends are wrong,” Church began. “They have been affected by the skepticism of a skeptical age.”

He continued in a manner both cosmic and direct: “In this great universe of ours man is a mere insect, an ant, in his intellect, as compared with the boundless world about him, as measured by the intelligence capable of grasping the whole of truth and knowledge.

“Yes, Virginia, there is a Santa Claus. He exists as certainly as love and generosity and devotion exist, and you know that they abound and give to your life its highest beauty and joy.”

O’Hanlon’s letter and Church’s wise, generous reply first appeared on the editorial page of the Sun on September 21, 1897.

Read the full text of Virginia’s letter and Church’s reply at the Newseum’s website.
Since then, they have been translated into dozens of languages and appeared, in whole or part, in countless books, movies, and newspapers.

A Grown-Up Virginia’s Fordham Dissertation: “The Importance of Play”

The experience had a profound effect on young Virginia O’Hanlon, and it clearly influenced her doctoral dissertation, “The Importance of Play,” which she presented at Fordham in 1930.

By that time, she was using her given name, Laura, and her married name, Douglas. Laura V. Douglas had a daughter of her own, Laura Virginia, and was working as a New York City public school teacher after having earned a BA at Hunter College in 1910 and an MA at Columbia University the following year.

As her dissertation title suggests, she remained a child at heart—a child with a sense of social justice.

In her thesis, she called play “one of the chief educational factors in the small child’s world” and expressed particular concern with conditions among immigrant communities in Lower Manhattan, where, she felt, poverty contributed to an anemic play life and kept children from developing the “spontaneity and intelligence which make quick learners and apt scholars.”

In discussing the shortage of toys in certain neighborhoods, she wrote, “The pushcart displays an occasional doll or tea set for sale but not such as make glad the heart of childhood”—drawing the last phrase from the final line of Church’s famous editorial. (Santa “lives, and he lives forever,” Church wrote, and “ten times ten thousand years from now, he will continue to make glad the heart of childhood.”)

Douglas traced the history of play, from Plato to the Bible to Elizabethan England to her own time. And she devised a “play program” for children, using “an experimental and control group” to “test whether or not play is important in quickening the development of intelligence and enhancing the changes of greater happiness for the child both in school and in life.”

Her conclusion: “The writer, of course, realizes that too wide or too sweeping conclusions cannot be drawn from this study. She does, however, feel that it offers quite conclusive evidence that through play a child may reach fuller development than without it.”

In closing she quoted the Gospel of Matthew. “‘Suffer the little children to come unto me,’” she wrote. “[A]nd how can they come to Him more beautifully than thru innocent, normal, childish play, which if their home cannot give them, their school should!”

A Message for Children of Yesterday: “Seek Out These Trusting Children”

Audio: In 1937, a 48-year-old Virginia O’Hanlon Douglas spoke with WNYC’s Seymour Siegel about her letter, her belief in Santa Claus, and her daughter, Laura Virginia.
During the 1930s, 40 years after her letter first appeared in the Sun, Douglas published a follow-up letter in a booklet titled Is There a Santa Claus? A Little Girl’s Question Answered. She wrote:

Dear children of yesterday and today, when that question was asked, I, a little girl, was interested in finding out the answer just for myself. Now, grown up and a teacher, I want so much that all little children believe there really is a Santa Claus. For, I understand how essential a belief in Santa Claus, and in fairies too, is to a happy childhood.

Some little children doubt that Santa still lives because often their letters, for one reason or another, never seem to reach him. Nurses in hospitals know who some of these children are. Teachers in great city schools will know others.

Dear children of yesterday, won’t you try to seek out these trusting children of today and make sure that their letters in some way reach Santa Claus so that “he will continue to make glad the heart of childhood.”

That, I think, is the best way of proving there is a Santa Claus, both for ourselves and for the children. Do you remember how Peter Pan once asked us to show our belief in fairies? You will of course do it a little differently, but you will each understand how. So, like Peter, I say, “Show you believe, please show you do,” and I shall always be gratefully yours,

Laura Virginia O’Hanlon Douglas died on May 13, 1971, in a nursing home near Albany, New York. She was 81. But the message she elicited through Francis Church lives on, as does her own faith in the spirit of Christmas.

In December 1960, one year after she retired from the New York public school system, she appeared as a guest on the Perry Como Show. She spoke about her career as an educator and her family, saying she’s had “a wonderfully full life.”

“In other words, you’re convinced, really convinced there is a Santa Claus,” Como says.

“Absolutely,” she responds, before proceeding to read the words that made her famous. “This letter has been answered for me thousands of times.”

Watch a clip of Virginia O’Hanlon Douglas’ appearance on the Perry Como Show.