skip to main content
Return to Fordham University
You are at:Home»Fordham Magazine»Features»The Ancient World in 24 Objects: A Student-Curated Antiquities Exhibit Brings the Classical World to Life
Above: An Etruscan terracotta antefix (roof tile) in the form a kneeling kore (maiden). “I love … the fashion and decoration of the body,” Fordham junior Madeline Locher said of this object. “You can truly see why there is so much classical influence on fashion today.”
Ancient artifacts tell fascinating stories, as students learned last spring while curating “The Classical World in 24 Objects,” an exhibit at Fordham’s Museum of Greek, Etruscan, and Roman Art.

“We have some great examples of what life really was like for the ancients,” said Michael Sheridan, a member of the Class of 2018 double-majoring in history and art history, and one of the 18 students who took the class. “Most universities don’t have anything like this, so we really are lucky to have this collection here.”

The exhibit ran from May 6 through August 15. Students selected the objects—including imperial portraits, luxury household items, coins, and painted pottery—from the 260-plus antiquities in the museum. They researched the objects’ history, wrote the text to accompany them, and helped design the display in a newly created gallery at the museum.

One of the students in the class, Michael Ceraso, even teamed up with another Fordham student, Michael Gonzales, to develop an app for the exhibit that ran on three iPods in the gallery.

“They were involved every step of the way,” said Jennifer Udell, PhD, curator of university art and the seminar’s instructor, who realized her longstanding idea for the project thanks to a gift from Fordham Trustee Fellow Robert F. Long, GABELLI ’63, and his wife, Katherine G. Long. 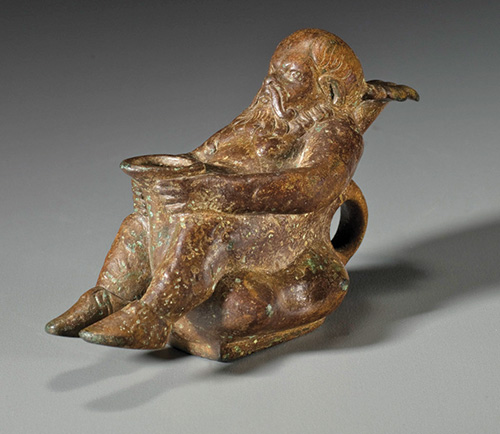 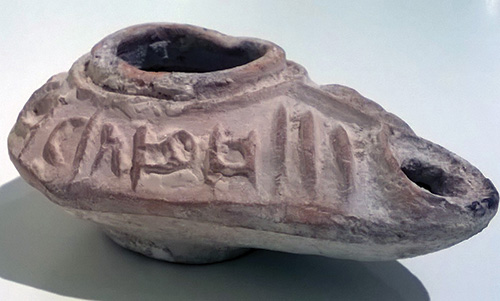 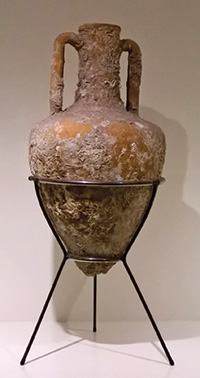 “This jar served a concrete, utilitarian purpose from the time it was made until the day that it finally fell prey to the waves of the wine-dark Mediterranean. The barnacles make for an interesting aesthetic that might grab your attention for a moment or two, but [they also] tell us so much about the perils and realities of life and trade in the ancient Mediterranean.”
—Christopher Boland, Class of 2016, math major and theology minor 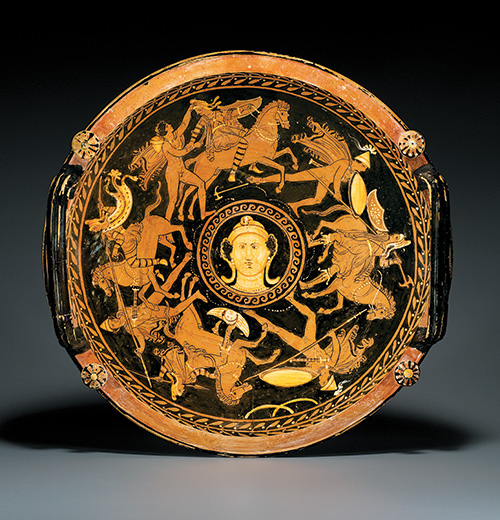 “This particular patera is among the largest objects in the collection, and I, like others, am drawn to this sort of scale. It depicts the Amazonomachy, an ancient battle between the Greeks and the Amazons, a fierce race of warrior women emblematic of ancient feminism and girl power.”
—Maria Victoria Alicia Recinto, Class of 2016, art history and anthropology major 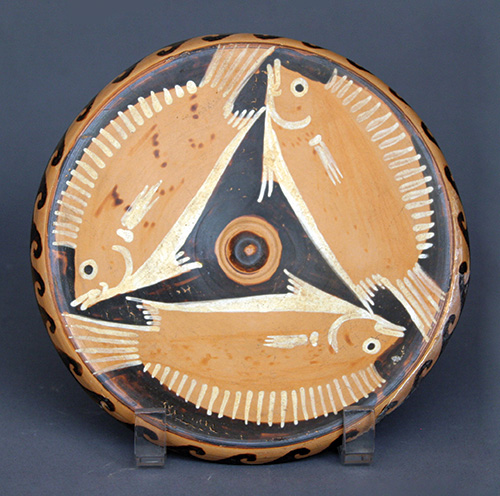 “This plate conveys the fisherman in an everyday life. It is easy to envision a small enclave of aquatic-based communities along the Mediterranean coast, coming home after a day at sea, and cooking the day’s catch. It is easy to imagine the smell of mackerel, sea bass, octopus, and other marine delicacies grilled and served on this plate with the pungent dressing of fresh olive oil, the scent carried away on a sea breeze after a hard day’s work.”
—Owen Haffey, Class of 2019, English major 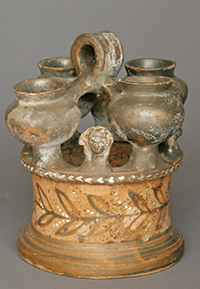 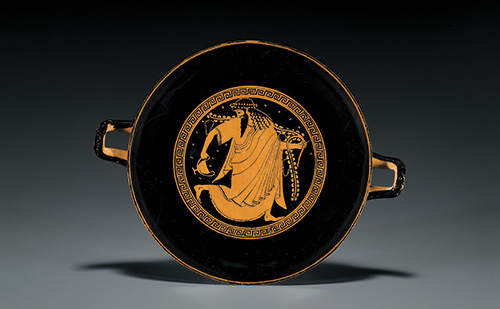 “I’ve always been amused by these dishes and how they’re used as drinking cups. … This finely made image of Dionysus shows him in a lunge gazing back at his own (possibly empty) goblet. When you finish your wine and are faced with the god of wine himself, it seems like a pretty good sign to fill up your kylix again.”
—Emma Cleary, Class of 2016, chemistry major and art history minor 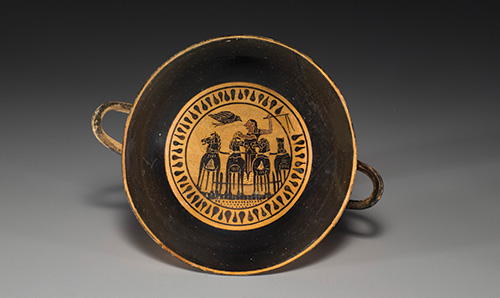 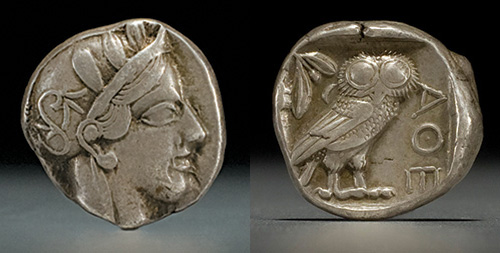 “What originally attracted me to this coin was the fact that it featured the portrait of the goddess Athena instead of a historical Greek ruler. This fact led me to wonder about both the representation of mythological figures and the representation of women on coins. … I wonder who might’ve used this coin and what they might’ve bought with it. It’s fascinating to think that we still read this piece of metal as a coin, but it now carries the monetary value of an ancient artifact instead of its original value as a circulated coin.”
—Katie Fredericks, Class of 2016, art history major 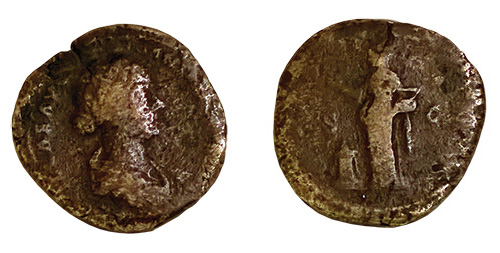 “Lucilla was a Roman empress who was executed after she made a failed attempt to assassinate her brother, who was the Roman emperor at the time. Of course the coin was made before she fell out of favor, but how has it survived this long? I assumed the Romans would’ve melted down many coins depicting Lucilla in order to reuse the bronze as they so often did, and I think it’s amazing that we get the chance to get up close to this ancient scandal.”
—Katie Fredericks, Class of 2016, art history major 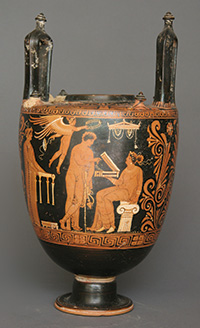 “One of my favorite things to do when I’m interacting with ancient artifacts is to imagine the stories of the objects and the people who used them. How were [they] like me and how were they different? Who has touched and used this object? What was the wedding like? Was it a perfect ceremony or did anything go disastrously or hilariously wrong? What was the couple like? Were they in love or was the marriage motivated by other factors? Asking such questions really brings these objects to life for me and lets me look at them in a whole new way.”
—Sarah Homer, Class of 2016, English major and music minor 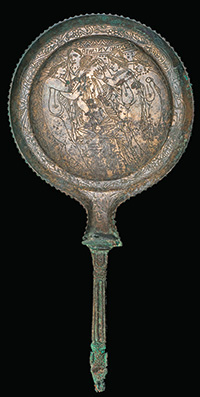 “The engraving on the mirror shows three goddesses: Uni, Turan, and Mea, whose Greek names are Hera, Aphrodite, and Athena, respectively. Although the goddesses have Etruscan names, they are the same ones involved in the incident which incited the Trojan War. According to the myth, three goddesses were attending the nuptials of Peleas and Thetis, when a wedding crasher, Eris, threw a golden apple with the label ‘to the fairest.’ The goddesses fought over this apple and thus over who was the most beautiful. So the fact that this engraving is placed on a mirror is very interesting, because it is an object of vanity.”
—Jane Parisi, Class of 2019, classical languages major 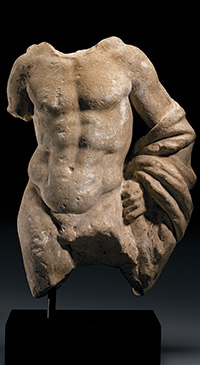 “When I was younger, the legend of Herakles was always one of my favorite tales from antiquity, and this and the presence of drapery are what initially attracted me to this figure. I am taking my fashion minor at Fordham’s Lincoln Center campus and, as a student of fashion, the classic Greek drapery and the beautiful form of the sculpture called to me as soon as I saw it.”
—Hans Singer, Class of 2018, art history major and fashion studies minor 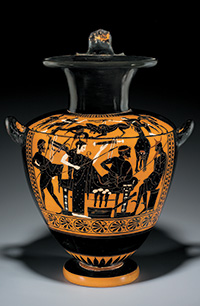 “This is truly a prime example of high-quality Attic vases. The scenes are brilliant and reflect the tendency of vase painters to encapsulate an entire myth through just a few images. Here we have the most popular myth: the 12 labors of Herakles. … Viewers are shown the beginning and the end of Herakles’ story. It’s one complete beautiful cycle.”
—Masha Bychkova, Class of 2018, double major in classical languages and classical civilizations, with a minor in visual arts

“I was first attracted to this portrait because it’s bronze, which is rare in ancient sculpture, and also because there are few portraits of Caracalla as a child. It’s not just a portrait of a child but also effectively a portrait of a mass murderer, a delusional religious fanatic, and a mentally ill person. At the same time, it is a portrait of the emperor who would become responsible for the bath houses in Rome and the Edict of 212, which granted Roman citizenship to all free inhabitants of the empire. This sculpture gives insight into the human condition. This is a man who lived thousands of years before our time, yet embodies the same emotionality, conflicts, and mortality of humans in the 21st century: family power struggles, envy and insecurity, murderous rage, religious fanaticism and superstition, and celebrity obsession.”
—Olivia Ling, Class of 2017, classical languages major 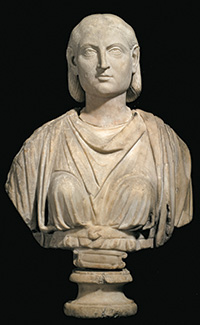 “I was initially attracted to the portrait bust of the Severan woman because of my background in working with Roman imperial commemorative statues that were meant to honor prominent societal women. These statues were representative of the changing atmosphere in ancient times, one in which women possessed the ability to honor their status in society as much as their male counterparts. I was also interested in the statue because of its current location in the museum, since it’s right next to the entrance and it’s one of the first subjects visitors see.”
—Simek Shropshire, Class of 2017, art history and English double major 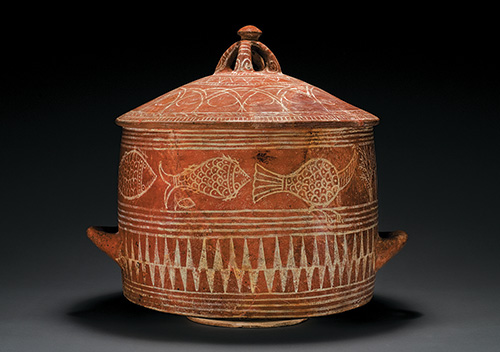 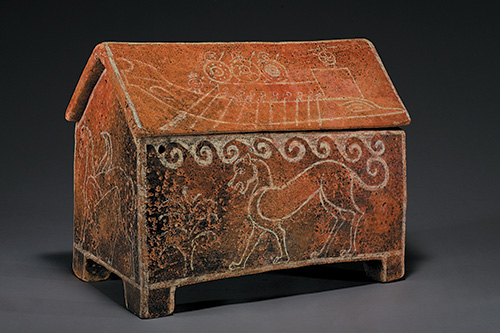 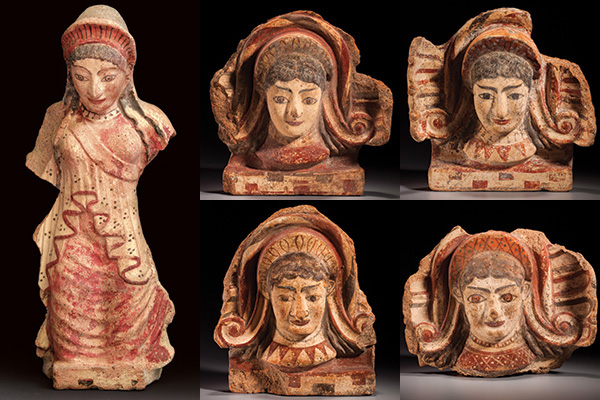 “These women represent maenads, who are the servants of the god of food and wine, Dionysus. It is said that Dionysus put these women under a drunken spell and, as a result, they became praised and protective, which is the role they play as they watch those who enter temples. This would bother most feminists, because it indicates a man’s power over women. However, I think that they exude the power and fury of women. Their intense eyes and beauty would force anyone to enter with caution and reverence.”
—Madeline Locher, Class of 2018, art history major 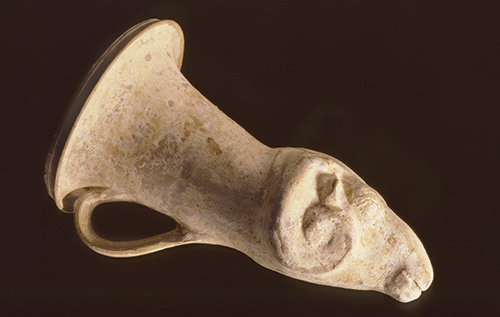 “The beauty of [this cup]lies in its simplicity. It’s terracotta and unpainted, and to me this draws all the attention to the ram. … If you notice, there’s no way to put this down if it’s filled with anything, so you best be drinking all night!”
—Christos Orfanos, Class of 2018, economics and classical civilization major, and marketing minor