skip to main content
Return to Fordham University
You are at:Home»Fordham Magazine»Alumni News»Seven Decades Later, a World War II Hero Gets His Due

On Nov. 1, William Schneider, a 1946 Fordham graduate, was awarded the Silver Star Medal for his heroism in World War II. Also pictured is Air Force Maj. Gen. Christopher Bence. (Photo courtesy of the Air Force.)
More than 70 years ago, William J. Schneider took a break from his studies at Fordham University to serve as a flight commander in World War II. During one battle, he showed such gallantry that his commanding officer recommended him for the Silver Star Medal.

Now, finally, he has received that medal—eight children, 22 grandchildren, and nine great-grandchildren later. At age 97.

His extended family members came together on Nov. 1 to see Schneider receive the Silver Star, the U.S. military’s third-highest combat award, for the courage he displayed during the engagement over Dogna, Italy, in 1945, when he was a major in the U.S. Army Air Corps’ 310 Bombardment Group.

At a ceremony, Air Force Maj. Gen. Christopher Bence praised Schneider as “a man who not only answered his nation’s call, but whose actions directly saved the lives of fellow Americans and helped defeat the Axis powers.”

“It’s not often you get to stand in the presence of a true hero,” he said. 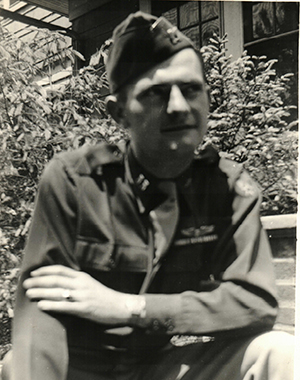 The ceremony, held at Joint Base McGuire-Dix-Lakehurst in southern New Jersey, culminated four and a half years of tracking down the necessary proof that her father was supposed to receive the award, said his daughter, Heidi McKay.

“Five years ago he said something about it, and I said, ‘Well, you know, I can probably see if we can still get it,’” she said.

But it proved to be no easy task, given the dearth of records about her father’s actions. On Feb. 23, 1945, he was serving as flight commander aboard a B-25 bomber, directing an 18-plane formation sent to disrupt German supply lines by destroying a heavily defended rail link. Anti-aircraft fire damaged many of the other bombers and crippled Schneider’s plane, knocking out the right engine, propeller control mechanism, and airspeed indicator, and smashing an elevator trim tab, but he still directed the B-25s to complete a highly accurate bombardment of their target.

“During the arduous return flight over enemy territory, Schneider skillfully assisted the pilot in the landing procedure and was greatly responsible for the successful emergency crash landing that followed, and for the safe return of all members of the crew,” the Air Force said in an Oct. 25 statement.

After the battle in Italy, Schneider  received a letter from his commanding officer recommending him for the Silver Star, but he never followed up on it, McKay said. With the war’s end, Schneider was busy with other things, McKay said, like returning to earn his business degree at Fordham—he graduated in 1946—and starting a family with his wife, Lucille, whom he met at the University. (She passed away in 2014.) They settled in Hillsdale, N.J., and he spent his career working in sales for National Cash Register and in sales and management for Volckening, a manufacturer in Brooklyn, McKay said.

Staffers for two New Jersey legislators, the late U.S. Sen. Frank Lautenberg and U.S. Rep. Scott Garrett, helped with tracking down records for Schneider’s award, McKay said. She learned that the needed records may have been among the World War II-era files destroyed in a building fire in the 1970s. “Finally, this one Air Force historian was able to piece together enough to say, ‘Yes, he really was supposed to receive it,’” she said.

Schneider had a modest reaction to the award, according to an Air Force statement.

“I don’t think I deserve what they’re proposing for me to get, but I think it’s good for generations to come to be able to understand what happened,” he said.