skip to main content
Return to Fordham University
You are at:Home»Fordham Magazine»Public Defender Brings Ignatian Spirituality to the Incarcerated

After a decade representing people charged with serious crimes in Hudson County, New Jersey, public defender John Booth, GRE ’14, felt he was burning out, tired of watching clients repeat the cycle of incarceration.

“Why do I find myself representing the children of former clients?” he wondered. “When will all of this hurt end? Most importantly, where is God in all of this and why am I a witness to such horror?”

He started digging deeper into his motivations for becoming a public defender, and realized he was drawn to his clients’ plight. “I knew I cared for them and was always fighting for them,” he says, “but I didn’t realize just how deeply they had touched me.”

Booth recognized that there was a spiritual element to addressing the causes of criminality and the problems of mass incarceration and recidivism, and that there were limits to what he could do in his role as a lawyer, both from an ethical and a practical standpoint. He knew that it was inappropriate to discuss matters of faith with his clients, that “melding the roles of attorney and minister can add another injustice upon the accused person,” as he put it, but he also had no plans to give up his day job.

A Route to Spiritual Freedom

So in 2009, after considering ways to help people like his clients beyond the courtroom walls, and after the loss of a child to stillbirth, Booth started a journey toward deeper spiritual reflection and practice. He began further exploring Ignatian spirituality and took the Nineteenth Annotation, or the “Ignatian retreat in daily life,” a way to complete the Spiritual Exercises of St. Ignatius in a less intensive time period than the traditional 30-day retreat.

He also felt that the Spiritual Exercises could prove as valuable a healing process to incarcerated people as they were to him.

“I know there are many routes to that goal of freedom for everybody, and [Ignatian spirituality] is just one potential route,” Booth says. “Since it meant something to me, I thought it might be meaningful to others.”

That thinking led Booth to Fordham’s Graduate School of Religion and Religious Education (GRE), where he completed a master’s degree in religious education in 2014. His studies culminated in a thesis titled “Prison Ministry’s Quest for Spiritual Freedom in the Spiritual Exercises of St. Ignatius of Loyola,” which explored how the Exercises could be applied within a prison setting to provide emotional support and spiritual freedom to inmates, and to help them make a successful transition to society after release.

“You can still bring the spirituality [into prisons], and you bring portions of the Exercises,” Booth says. “They need that psychology. They need to be able to somehow express what they’re going through in a safe environment. A lot of [inmates]will say that they can’t do this on their own.”

Bringing Guidance Behind the Walls

Booth’s desire upon completing his master’s was to become a part-time prison minister outside of his professional jurisdiction and establish a prison ministry program in his and other parishes in Jersey City. As he continued to look into bringing those goals to fruition, he met Zach Presutti, S.J., a Jesuit scholastic and a psychotherapist with an interest in prison ministry. Booth gave Presutti a copy of his thesis, and Presutti realized it was the exact kind of spiritual guidance he wanted his new nonprofit, Thrive for Life, to provide for the incarcerated. 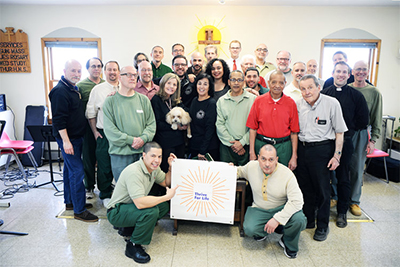 Booth drew on his thesis to create a brochure for Thrive for Life, “From Fear to Freedom: Spiritual Exercises Behind Prison Walls,” which functions as a guide for those providing Ignatian spiritual direction to inmates. Meanwhile, he began volunteering with Thrive for Life as a spiritual director within the prison setting.

Now, several times a month, Booth visits with inmates in New York—at Sing Sing Correctional Facility in Ossining, the State Correctional Institution in Otisville, and the Manhattan Detention Complex, also known as the Tombs—leading them through an abridged version of the Spiritual Exercises. He has become one of the core volunteer spiritual directors with Thrive for Life.

“[When we met], it was clear to me that this man was a disciple of Jesus,” Presutti says of Booth. “I saw someone who could really accompany the men behind the walls in their spiritual life.”

Booth relishes seeing inmates open up as they transition to life outside the prison walls.

“They can just kind of let go and be themselves and express themselves,” he says. “And as time goes on, you see them expressing more and more and more, individually, and collectively.”

The relationships between Thrive for Life’s spiritual directors and the inmates with whom they work does not end once the inmates are released from prison. One former inmate now works full-time at Thrive for Life. Many others gather once a month for a Sunday dinner at the Church of St. Francis Xavier, where the organization is based. These dinners not only include volunteers and former inmates but also family members and partners. Thrive for Life recently opened Ignacio House, a Bronx residence with space for 20 to 24 men who have recently been released from incarceration.

Booth himself is working to expand his thesis into a book-length text that would serve as a manual for the organization, and he recently contributed an essay on the stressors of racism in inmates’ lives to Today I Gave Myself Permission to Dream: Race and Incarceration in America, published by the University of San Francisco Press. He also provides one-on-one spiritual direction for parishioners at St. Francis Xavier through Charis NYC, and for two inmates on death row at San Quentin State Prison in California, corresponding with them by letter.

Meanwhile, his workload as a public defender, was made more manageable by the bail reform measures New Jersey instituted two years ago, eliminating cash bail and setting new standards on releasing individuals based on whether they pose a danger to society. He is now able to focus on processing cases and appearing for a smaller number of trial cases. Beyond that, his volunteer work as a spiritual director has given him new perspective on his day job, and he says his colleagues have reacted very positively when they find out about his life as a spiritual guide.

Booth credits his wife, Nancy Mendez-Booth, with being at the center of everything he does, but he says it was his time at Fordham’s Graduate School of Religion and Religious Education that laid the foundation for his current work and provided the opportunity to explore how to practice his faith in service of others.

“Courses were geared toward trying to live out your faith in the modern world with constant interaction with the real world,” Booth says.

“Fordham made me into the best spiritual director that I could be.”