skip to main content
Return to Fordham University
You are at:Home»Fordham Magazine»Features»On-Campus Farm Nourished Fordham in its Early Years
Students are shown above in the refectory at St. John’s College, as Fordham was then known, in 1891. On-campus dining was a more solemn affair at the time, tightly regulated by the college’s Rules and Customs Book.
In the early years of Fordham, when funding for the new college was tight, one thing helped to defray costs and sustain students for years: the food that was cultivated on campus.

“This was a working farm from colonial times all the way down to about 1907 or so,” said Roger Wines, Ph.D., FCRH ’54, professor emeritus of history, who has written about Fordham history in partnership with anthropology professor Allan Gilbert, Ph.D.

The food was produced within sight of the building—today’s Cunniffe House—where the students studied, slept, and ate. On the site of the Rose Hill Gym was an orchard that produced apples, pears, and cherries, according to the professors’ research. Potatoes, corn, and other crops were also grown on campus. A vineyard on the site of today’s college cemetery yielded two or three barrels of wine per year, and the field at present-day Fordham Prep was a pasture populated by 30 to 40 cows. 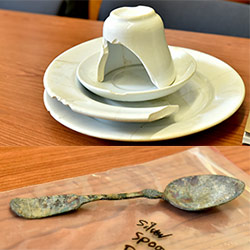 During a 17-year archaeological dig, Roger Wines and Allan Gilbert found cups and saucers and a silver spoon from the early decades of Fordham.

The farm produced “a good percentage” of the food and milk for the college, according to a new history of Fordham by Msgr. Thomas J. Shelley, GSAS ’66, professor emeritus of theology. Wines and Gilbert said the college also purchased meat and groceries from New York merchants, and Fordham’s first Jesuits, Frenchmen who liked to drink wine with dinner, imported wine from Bordeaux to supplement what was produced on campus.

Dietary staples at Rose Hill included beef and pork; pigs as well as cows were raised at the farm, Wines and Gilbert said. On special occasions, students dined on oysters and other shellfish. Bread was probably baked on campus, and vegetables may have been grown in a greenhouse east of the University Church. Jesuit brothers oversaw food production.

(In recent years, Fordham students have made a modest return to Rose Hill’s farming roots by maintaining St. Rose’s Garden on one edge of campus and organizing a weekly Fordham Farmer’s Market in front of the McGinley Center.)

After a few decades, the students’ dining area was moved from today’s Cunniffe House to a newly completed space in Dealy Hall. Eating was a solemn affair, far removed from the freewheeling atmosphere of today’s campus dining venues. It was strictly regulated by the college’s Rules and Customs Book, according to a chapter by Gilbert and Wines in Fordham: The Early Years (Fordham University Press, 1998), edited by Thomas C. Hennessy, S.J.

A student read aloud from literature or history during meals, and No. 5 in the Rules for the Refectory section of the customs book required students to eat in silence so they could “give an account of what is read, if called upon.” Students stopped eating at the ringing of a bell and then rose to face the prefect, answer a prayer, and make the sign of the cross before turning to silently leave in single file with their arms folded.

Indeed, students were expected to keep quiet during most of their daily routine, which was akin to the rigors of a “medieval monastic regime,” according to Msgr. Shelley’s book, Fordham, A History of the Jesuit University of New York: 1841-2003 (Fordham University Press, 2016). But they still found moments for food-related levity, he wrote: “God sent food; the devil sent cooks,” the students would gripe, echoing a longstanding complaint of college students everywhere.