skip to main content
Return to Fordham University
You are at:Home»Fordham Magazine»Books»More Awesome Than Money 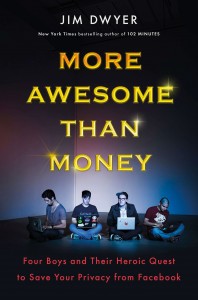 More Awesome Than Money: Four Boys and Their Heroic Quest to Save Your Privacy from Facebook by Jim Dwyer, FCRH ’79 (Viking)

In May 2010, Pulitzer Prize-winning journalist Jim Dwyer wrote a New York Times column about “four geeky college students” who wanted to “build a social network that wouldn’t force people to surrender their privacy to a big business.”

They called it Diaspora and posted a pitch video on Kickstarter in hopes of raising $10,000 to build the bones of an open-source, user-owned network. In days, they received 20 times that amount from nearly 6,500 backers who gave them, Dwyer writes, a “global commission to rebottle the genie of personal privacy.”

As he follows them from New York City to Silicon Valley, Dwyer offers a humane, insightful account of their ill-fated venture (one of the founders committed suicide in November 2011, at age 22) and puts their story in the context of ethical issues about surveillance, data mining, and Internet privacy that are even more urgent and complex now than they were four years ago.