skip to main content
Return to Fordham University
You are at:Home»Fordham Magazine»Features»Conquering the Oceans Seven: How Marathon Swimmer Elizabeth Fry Is Making 60 the New 40
Elizabeth Fry set a Guinness World Record, becoming the oldest person to complete the Oceans Seven. Photo courtesy of Guinness World Records.
Swimming the English Channel. That was a goal Elizabeth Fry tucked away when she was just a little girl learning to swim on Long Beach, Long Island, during the 1960s.

“My father was British, so we always heard about the English Channel. He used to say, ‘If you’re a real swimmer, you’ll swim the English Channel,’” said Fry, who earned an M.B.A. from Fordham’s Gabelli School of Business in 1987.

She completed her first channel crossing in 2003 at the age of 44. Little did she know then that it would be the start of a 16-year quest to complete six more of the world’s most challenging and rewarding long-distance, open-water swims.

Looking back, Fry, who was already a marathon runner and had been a member of the swimming team as an undergraduate at the University of Connecticut, said that she thinks marathon swimming was a natural next step.

“When I was swimming in the English Channel in Dover, people from all over the world were training there, and that’s when I heard about these other swims” that would eventually make up the Oceans Seven, she said, referring to the marathon swimming challenge devised in 2008 and modeled on mountaineering’s Seven Summits.

The other bodies of water are the Catalina Channel off the coast of California, the Strait of Gibraltar from Spain to Morocco, the Molokai Channel in Hawaii, the Tsugaru Channel in Japan, the Cook Strait in New Zealand, and the North Channel from Northern Ireland to Scotland.

“I had already put it on my list that I wanted to go to Japan—I had met the person that organized the swims over there,” Fry said. “So that’s kind of what started it, and then at some point during my journey the Oceans Seven became a goal for people, and so it just seemed like a natural thing [to complete the challenge]. Most of my swims are really about going to these places and meeting people that I had heard about or were just inspiring to me.”

‘It Was Cold. It Had Jellyfish. It Had Currents.’

Fry said her seventh leg, the North Channel swim, which she completed in August 2019 at the age of 60, was one of the most challenging.

“For the North Channel, it had everything—it was cold, it had jellyfish, it had currents, but it was still just beautiful,” she said. “I really was quite fearful of that channel, mostly because I would say I am hypersensitive to toxins and I have asthma, so all that stuff plays into it.”

That swim, however, allowed her to check off another accomplishment—becoming the oldest person to complete the Oceans Seven, according to Guinness World Records.

“I don’t know that I ever dreamed that I would be the oldest doing anything,” Fry, now 61, said with a laugh. “I have been inspired by so many people older than me, so my hope is that being the oldest person to swim the Oceans Seven will inspire other people to just keep on swimming.” 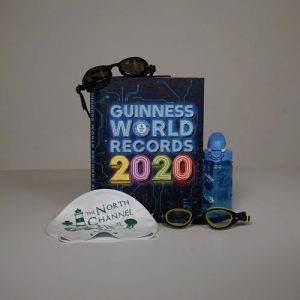 Fry attributes much of her success to having a well-prepared crew to help guide her and feed her during these swims, some of which have taken more than 24 hours to complete.

“My most important asset is my crew, and I’ve been really lucky—my sister Peggy has been my crew chief for almost all of my swims, and I don’t even have to say anything,” she said. “Having a well-trained crew and having someone that knows [what I need]is probably the most important and biggest safety thing that you can have out there. They never take their eyes off me.” That can be important, she said, because out in the water, it can feel like she’s all alone.

“I don’t think I’ve ever felt as tiny, like a little speck, as I did swimming in between Molokai and Oahu,” she said. “I mean the waves were massive, you’re just all alone out there, you can’t really see the shoreline.”

For Fry, though, once she’s in the water, she said her mind “goes blank.”

“It’s like a dynamic meditation for me—some people sing, some people know exactly how many strokes they’ve swam across,” she said. “I typically finish up the swim, and it’s like, ‘Oh yeah, I kind of remember that—what hour was that?’ I’m typically just really enjoying the water—even if it’s cold and dark, even in the darkest, the water will be phosphorescent. It’s just beautiful and tranquil, and I just love it so much, I don’t even notice that I’m getting pounded by waves.”

To prepare for her swims, Fry said, she spends as much time as she can in the water during the week, but particularly on weekends. In the winter, that means going to the local YMCA in Westport, Connecticut, her hometown, but in the spring and summer, she heads out to the Long Island Sound. To prepare for certain swims, such as swimming both ways around Manhattan Island—counterclockwise with the current, and clockwise against it—she’s gotten creative.

“I actually trained in Connecticut at a dam that used to release [water],” she said. “I used to swim against the dam release and just figure I’d make a little headway and get used to kind of swimming in one spot.” 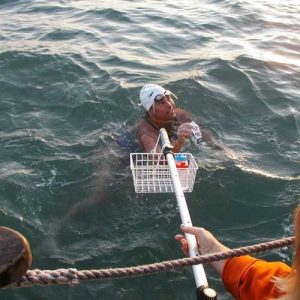 Elizabeth Fry received food to keep her nourished and able to perform during a marathon swim. (Photo courtesy of Elizabeth Fry)

Fry said that swimming has helped her in her professional life as a financial services consultant, and has also provided opportunities to get involved in her community. She helps organize the SWIM Across the Sound event off the coast of Connecticut each year, with the proceeds going to the St. Vincent’s Medical Center Foundation.

Fry said she hopes that people can see her story of finding her passion in midlife and really hitting her stride in her 60s as an example of never thinking it’s too late to do anything.

“I started late in life,” she said. “I was 44 when I started open-water swimming and marathon swimming, so for those folks [in midlife]now, I like to say, ‘60 is the new 40,’” she said, smiling. “I am swimming as fast as I ever have and … I’m as strong as I’ve ever been.