Kristine Welker, MC ’88, didn’t know it at the time, but by embracing the power of the female network at Marymount College, she started a lifelong trend that has shaped her life, including her career as a pioneering publisher and digital media exec.

“I didn’t realize it then,” she says, “but now I see that there’s been a theme in my life of championing women, and that started there.”

Welker, who graduated from Marymount in 1988, likes to say that her alma mater found her twice—once as a public school-educated student who didn’t expect to attend a Catholic, all-women’s college, and again in the early 2000s, when she was asked to join the college’s alumnae board.

“I joined just as Marymount was beginning its relationship with Fordham,” Welker says. “I felt very privileged to be a part of the process of redefining what the face of Marymount would look like through its partnership with Fordham.”

Though Welker admits that the initial transition was difficult (Marymount became part of Fordham in 2002 and closed in 2007), she celebrates the schools’ lasting connections. “Fordham is a collaborator for Marymount and a champion for women. The schools share a goal of empowering the next generation of women and female leaders. And they share a similar educational value system.” 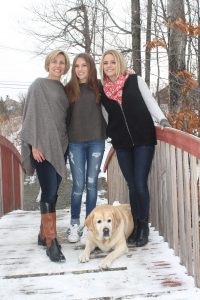 Kristine Welker with her daughters

That value system—of caring for others and valuing empathy in leadership—is something Welker has brought to her own work.

“I always tell my daughters, if you are fortunate as I have been to be able to merge your personal and professional value systems, run, don’t walk, toward that opportunity,” she says.

“I was able to do that starting with my first job at Ladies Home Journal, whose mantra was ‘Never underestimate the power of a woman.’” Welker rose to become the magazine’s ad director in less than a decade, and in 1999, she joined Hearst to help launch CosmoGirl! a spin-off of Cosmopolitan magazine for young women. As the founding publisher, she came up with the magazine’s branding: “Born to lead.”

Welker has been a pioneer at Marymount too. Almost 10 years ago, she helped establish the Marymount Endowed Legacy Fund with Patricia Cole, MC ’74, GSS-GABELLI ’15, and Margaret Fitzgibbon Watson, MC ’72, GSE ’73. Since then, many other Marymount alumnae have contributed to the fund, which has grown to almost $1 million and in the process supported 11 Fordham students—all women with some connection to Marymount—with scholarships.

“As members of the founding committee, we seeded the fund,” Cole says. “Kristine is an energetic and tremendous leader who really followed through and got things sewn up. We’re all so delighted by how far it’s come.”

Welker says their goal “was always more than just supporting as many women as possible with scholarships. We also wanted to support them at a higher level. That’s why I’m excited about the upcoming Women’s Summit at Fordham, which I think will transcend schools, ages, and industries.”

Welker and her fellow Marymount Alumnae Association board members are helping plan Fordham’s inaugural Women’s Summit, expected to take place on the Lincoln Center campus this year. Beyond focusing on networking and philanthropy, the event organizers hope to encourage attendees to come together to create positive change—at Fordham and beyond.

That same goal has always motivated Welker in her own career. It’s why she unexpectedly left CosmoGirl! at the height of its success to head up Hearst’s new digital division, why she continued on to Dr. Oz The Good Life magazine, and why she took a break from publishing last year to pursue nonprofit work as a member of the Muscular Dystrophy Association’s board of directors.

“Whatever comes next, I want it to be at the intersection of female leadership and tech, and I want to keep adding social value,” Welker explains. “Sometimes as women, no matter our age, we don’t give ourselves permission to take opportunities. I want to empower the next generation of women to step out of their comfort zone, trust their instincts, and do things differently.

“My hope is that my daughters and all the other young women out there will be empowered to be the next generation of—fill in the blank. Whatever it is, it’s theirs to fill.”