skip to main content
Return to Fordham University
You are at:Home»Fordham Magazine»Features»In New Book, Fordham Professor Explores Technology and Capitalism in Pop Music
Photo courtesy of Asif Siddiqi
What would the biography of a pop song look like? And what could it tell us about that song’s moment in history—and our own time?

In One-Track Mind: Capitalism, Technology, and the Art of the Pop Song, Fordham history professor Asif Siddiqi, Ph.D., and 15 other writers attempt to answer those questions. They each delve into the history of a song from the past 60-plus years, and their essays, Siddiqi writes, “show the undiminished power of the pop song.” He sees them as “distillations of important flashpoints,” and he hears in them “ghostly echoes that persist undiminished but transform[ed] for succeeding generations.”

The idea for the book blossomed at Fordham’s Lincoln Center campus in June 2019. That’s when the University’s O’Connell Initiative on the Global History of Capitalism provided funding for a workshop where Siddiqi and other contributors began to flesh out the cultural reflections they noticed in pop songs across the decades.

“We knew that there were a couple of running themes,” said Siddiqi, the book’s editor. “One was that technology was everywhere, not only in terms of recording studios [and instruments] but also media, like CDs and streaming, etc. And the other thing that was everywhere was, of course, capitalism, because of the business of making music.” 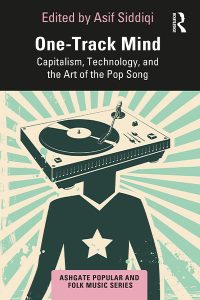 Siddiqi, a former Guggenheim Fellow, is best known for his books on the history of space exploration, including The Red Rockets’ Glare: Spaceflight and the Russian Imagination, 1857–1957. But he is also a guitar player and music lover with a keen interest in the technology of music production.

He said he was wary of gravitating too far toward the kind of classic rock often seen as the canon by fans and critics, so he encouraged contributors to highlight a diversity of artists and sounds. Their selections run the gamut from Afropop to hip-hop and span nearly five decades, from “Indépendance Cha Cha,” the 1960 Congolese anthem by Le Grand Kallé and African Jazz, to M.I.A.’s 2007 hit, “Paper Planes.”

Along with Siddiqi, four other Fordham professors or graduates wrote essays for the book, which was published last fall as part of Routledge’s Ashgate Popular and Folk Music Series.

Esther Liberman Cuenca, Ph.D., GSAS ’19, a medieval historian, wrote about Led Zeppelin’s obsession with medievalism, evident in the J.R.R. Tolkien references and Viking allusions in their lyrics—the latter most prominent in 1970’s “Immigrant Song.” With its hard-charging riff and wordless, wailing chorus, the song “made an ideal conduit through which ideas about the medieval world of the Vikings were communicated in popular culture,” Liberman Cuenca writes.

Inspired by a triumphant stop the band made in Iceland on their way to the Bath Festival in England, the swaggering machismo of the track was in part simple braggadocio about their “conquest” of foreign music markets, but Liberman Cuenca notes that there may have been a bit of British tongue-in-cheek humor in the band’s nod to colonization.

“Led Zeppelin’s particular brand of medievalism,” she writes, “banked on a type of nostalgia for an idyllic, rural Britain reflecting the postwar, post-industrial anxieties that many British youth in the 1960s and 1970s experienced. … For the British, the failed [Viking] colony of Vinland represented their fears of how carefully calibrated imperial projects could fail.”

The capitalist spirit of the music industry—and its focus on reaching foreign markets—is on full display in Fordham English professor Glenn Hendler’s essay on David Bowie’s “Rebel Rebel,” from 1974.

While the best-known version of the song, from the album Diamond Dogs, is a fairly straightforward rock song, Bowie decided he wanted to incorporate the sounds of Latin music for the U.S. single. In the mid-1970s, though, with album-oriented rock—and its mostly white purveyors—dominating FM radio playlists, the prominence of castanets and congas in the U.S. single meant that it was relegated to the AM dial, where listeners would find almost all non-rock (and non-white) sounds. And while that version still managed to crack the Billboard Hot 100 chart, it was replaced by the U.K. version after several months.

“The marketing did not match the product,” Hendler writes, “at least not in a context in which rock was being starkly differentiated from soul music, R&B, dance music, and Latin music. The U.S. single of ‘Rebel Rebel’ largely fell between the cracks of race, culture, format, and genre. The shape of those cracks would define the U.S. music market for years to come.”

In 1997, two decades after David Bowie released two versions of “Rebel, Rebel,” a different kind of marketing decision—opening direct lines of communication to fans via fast-growing online spaces—helped the brothers in Hanson turn their hit song “Mmmbop” into a springboard for building a devoted following, which is explored in an essay by Louie Dean Valencia, Ph.D., GSAS ’16.

Through the band’s official website and other online forums, Hanson’s fan engagement allowed the group to survive, Valencia writes. “The boy band singing about the ephemerality of relationships used digital technology to maintain their relationships with their fans—attempting to adapt to the digital era in real time.”

Elton John released “Candle in the Wind 1997,” a tribute to the late Princess Diana, in September 1997, two weeks after her death. It’s an update to the 1974 version written in honor of Marilyn Monroe. In One-Track Mind,
Christine Caccipuoti, FCLC ’06, GSAS ’08, describes how the song—a massive hit and cultural phenomenon that John has protected from widespread commercial usage—tapped into the same shifting modes of consumption as Hanson’s hit “Mmmbop” did that year.

“As the still-nascent internet became a site for growing personal expression in the late 1990s,” Caccipuoti writes, “many chose to create memorial websites. … These mostly female-run sites included many of the same features: photographs of Diana, writing about the host’s personal grief, and the lyrics to ‘Candle in the Wind 1997.’”

In the book’s last chapter, Siddiqi tackles technology on the music-creation side—specifically the practice of digital sampling, which has shaped the sound of pop music in the past 30-plus years. He writes about M.I.A.’s “Paper Planes,” a 2007 song by a Sri Lankan–British artist that samples the Clash’s 1982 song “Straight to Hell”—itself a critique of British and American colonialism—to explore the hustles necessary to survive in the colonialized Global South.

As a cheap technology, sampling has both democratized music creation and, at times, led to more unlicensed co-opting of “global” music by established European and American artists, Siddiqi notes. But its predominant use in hip-hop points to a certain reclaiming of history.

“As with writers and historians who liberally quote from prior works, by analogy, hip-hop artists using the digital sampler invoke, echo, and cite earlier artists through mechanical reproduction,” he writes. “The digital sampler here is not simply a musical instrument, a technical artifact, it also becomes, as M.I.A. shows in ‘Paper Planes,’ a tool for writing and rewriting history for those for whom history has always been written by others.”

As a whole, One-Track Mind offers plenty of opportunities to see the way that pop songs contribute to the writing and rewriting of history.

“Every song has a life cycle from birth to out into the world,” Siddiqi said. “And to write that biography is actually to talk about a moment in time. So I think you can read these stories if you are just interested in social and cultural history. Even if you don’t know the song, it might tell you something.”