skip to main content
Return to Fordham University
You are at:Home»Fordham Magazine»Books»How Could This Happen: Explaining the Holocaust 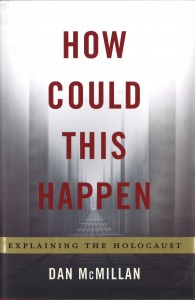 How Could This Happen: Explaining the Holocaust by Dan McMillan, LAW ’05 (Basic Books)

Many volumes have been written on the Holocaust, but not one of them, Dan McMillan argues, has provided a “comprehensive analysis of [its]causes.”

He sets out to do just that in this book, focusing not only on a combination of historical causes (Germany’s failure to become a democracy before 1918, the collapse of the Weimar Republic, the prevalence of anti-Semitism) but also on the psychological factors that led many ordinary Germans to become mass murderers. To understand is not to forgive. But, he writes, “understanding them should make us think twice before assuming that we would have done better had we stood in their shoes.”