skip to main content
Return to Fordham University
You are at:Home»Fordham Magazine»Alumni News»Grit on the Gridiron 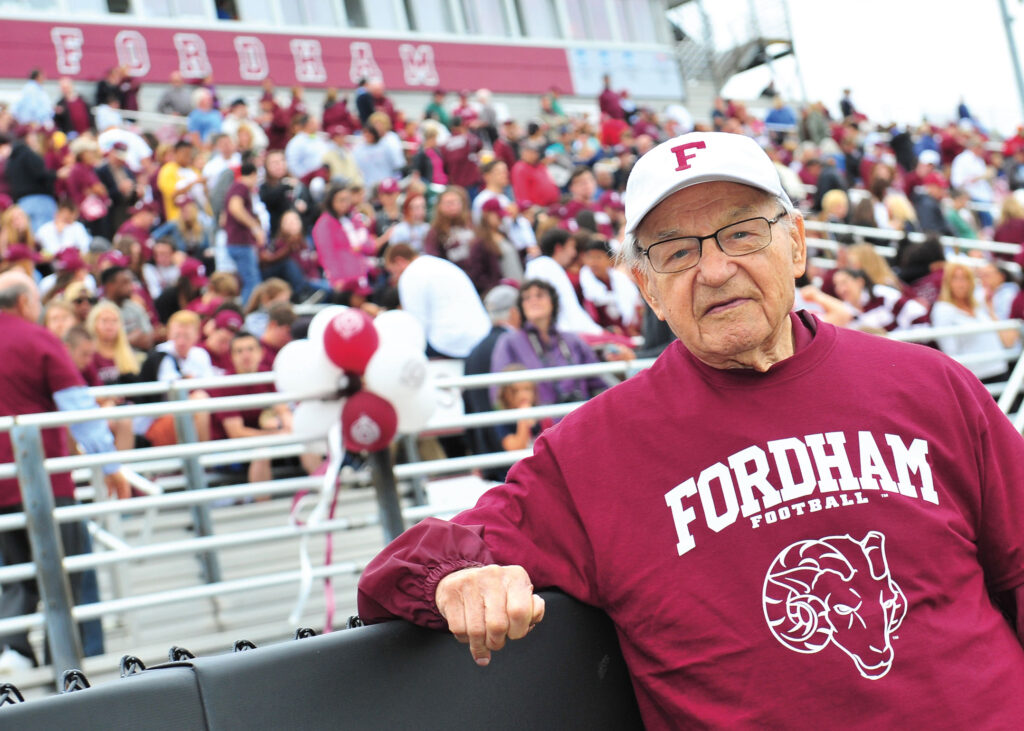 Andy Lukac, FCRH ’51, captain of one of the best football teams Fordham ever fielded, was among the former players honored at halftime of Fordham’s 2014 Homecoming game. (Photo by Chris Taggart)

Running back Chase Edmonds set a freshman school record, carrying the ball 22 times for 231 yards and four touchdowns. Among the fans cheering on Edmonds were some former Rams who waxed nostalgic about cold games, tough games, historic games, and plain old grit.

Andy Lukac, FCRH ’51, captain of the 1950 Rams, said that although they rarely get much play in the press, his team was one of the finest Fordham ever had. The team had an 8-1 record. “In all the newspaper write-ups, they mention the Blocks of Granite and last year’s squad, which is great,” he said, “but they never mention 1950.”

Lukac said that none other than Vince Lombardi, FCRH ’37, recruited him and many of his teammates before leaving Fordham in 1949 to coach for West Point. The legacy of Fordham’s 1950 season got diluted after the football program ran into the red and disappeared from campus for 10 years. But three Rams—David Langdon, FCRH ’65, Don Ross, FCRH ’65, and Bill Burke, FCRH ’65, LAW ’68—took a thousand dollars out of their bank accounts to buy uniforms and equipment, transforming the former rugby team into a football team.

Tom Johnson, FCRH ’61, was a fan of the newly revived Fordham team. He said he’s been buying season tickets since they first made them available, and he’s seen the Rams through the good, the bad, and even some ugly seasons. “There were many years where you used to pray for rain so you could leave the stands early,” he said. As Johnson spoke, the skies let loose and the DJ under the Homecoming tent blasted Creedence Clearwater Revival’s “Have You Ever Seen the Rain.”

Although the Rams’ playing was anything but ugly, fans started to leave. Except, of course, senior Ian Williams’ mother. Cheryl Williams flew up from West Palm Beach, Florida, for the game, and she wasn’t about to let a little rain deter her. “Go Ian! Go Fordham!” she cheered from beneath a red umbrella.