skip to main content
Return to Fordham University
You are at:Home»Fordham Magazine»Featured Image»Former Lab Partners Reconnect, Reflect on Fordham’s Influence
Above (from left): Gloria Coruzzi and Christopher Proto pose for a 1976 yearbook photo in a Fordham lab. Four decades later, they recreated the moment in Coruzzi’s lab at NYU, where Proto teaches part time at the dental school.
They’ve been teasing each other about the 1976 Maroon yearbook photo for years.

“Just look at my hair and beard!” said Christopher Proto, D.D.S. “I was wearing the uniform of the day—flannel shirt. You can tell who lived on campus and more or less rolled out of bed, and who commuted. Maybe that’s why Gloria looked more put together.”

Like Proto, Gloria Coruzzi, Ph.D., majored in biology at Fordham, but after graduation, the lab partners went their separate ways to start careers and families. She earned a doctorate in molecular and cell biology at NYU, where she’s the Carroll & Milton Petrie Professor and a former chair of the biology department. He earned a doctorate in dental surgery at Georgetown and has been in private practice since 1981.

They reconnected about six years ago, Proto said, after a chance encounter in a restaurant on Arthur Avenue, near Fordham’s Rose Hill campus.

Proto was having lunch with his wife, Monica, and their son, Andrew, FCRH ’12, when he spotted Coruzzi walking back to a table to join her husband and son. “I stopped her and said, ‘Gloria?’ She hesitated for a moment, then said, ‘Chris?’” The friends embraced, and introduced their spouses and sons. “We couldn’t believe that we reconnected in the Bronx after all these years,” he said. “It was like a movie.”

They later met for lunch near NYU, where Proto is now a clinical instructor at the College of Dentistry, and eventually brought two other former classmates into the fold: David Perricone, M.D., a pediatrician; and Diane Esposito, Ph.D., who earned a doctorate in biology at Fordham in 1982 and is now director of research compliance at Cold Spring Harbor Laboratory.

“We were an unusually balanced, fun foursome,” Coruzzi said.

“But,” Proto added, “Gloria was always the one who told us to stop fooling around! She kept us on task.”

Last June, the foursome returned to Rose Hill for Jubilee.

“We were all connected at some level, but our 40th reunion brought us together on campus for the first time,” Coruzzi said. “We walked down memory lane, even went into some of the labs.”

Both Proto and Coruzzi recalled the challenges of being pre-health majors—the long hours in the lab, the competition and anxiety associated with getting into grad school. But they said the support they received from professors and peers at Fordham continues to serve them well.

“As in any walk of life, we found that common adversity helps you develop strong bonds. You see it in the armed forces, on sports teams—we supported each other,” Proto said. “That sense of teamwork was very important to me.” 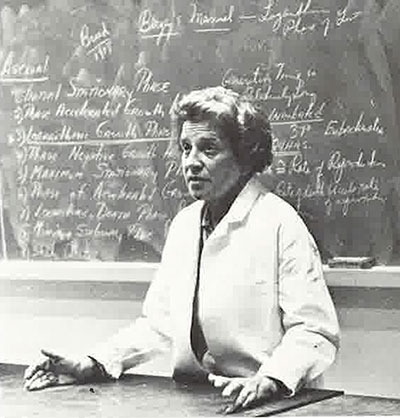 Coruzzi said she found a mentor in biology professor E. Ruth Witkus, Ph.D., who joined the Fordham faculty in 1944 and chaired the biology department from 1966 to 1978.

“She was chair of the department when women weren’t in many faculty positions,” Coruzzi said of Witkus, who died in 2008 at the age of 89. “She was way ahead of her time—razor-sharp smart, very decisive—and that really influenced me, especially when I was chair of the biology department at NYU. I’ve always thought of myself as a scientist, not a ‘woman scientist.’”

Coruzzi added that the Jesuit model of cura personalis, or care for the whole person, is something she tries to convey to her own students.

“You’re embraced by it,” she said, “and it stays with you as a person. Those ties that you make in college really can follow you for the rest of your life.”

Register here for Jubilee ’17, scheduled for June 2 to 4. And go to fordham.edu/reunions for information about all of this spring’s events, including the Lincoln Center reunions.