skip to main content
Return to Fordham University
You are at:Home»Fordham Magazine»Alumni News»Fordham Mourns the Death of Don Valentine, Silicon Valley and Venture Capital Pioneer
Photo: Sequoia Capital
Donald T. Valentine, FCRH ’54, a seminal Silicon Valley investor who founded Sequoia Capital in 1972 and helped build massively influential technology companies including Apple, Cisco, and Oracle, died on Oct. 25 at his home in Woodside, California. He was 87.
“I’ve always believed that the key to making great investments is to assume that the past is wrong, and to do something that’s not part of the past, to do something entirely differently,” he said in 2013 during an interview at a technology conference in San Francisco.
“Great companies,” he added, “are built with different products, by different people.”

A Knack for Electronics

A New York native, Valentine attended Mount Saint Michael Academy in the Bronx before enrolling at Fordham University, where he studied chemistry and was a co-captain of the water polo team. He earned a bachelor’s degree in 1954, then studied and taught electronics during a brief stint in the Army, instructing officers on how to use radar and other systems.
After leaving the military in the mid-1950s, he took a job at Sylvania Electric in New York. He was transferred to California, where he soon joined Raytheon as a sales engineer before making a consequential decision in 1960.
“My bet was that the semiconductor business was the business of the future in electronics,” he said during a 2009 oral history interview. So he joined Fairchild Semiconductor, “the first company, as far as I could find … that began making semiconductors with silicon.”
Having studied chemistry at Fordham, he said he quickly grasped how silicon would transform the electronics industry, noting that it “worked at much, much higher temperatures” than germanium, the element most commonly used as a semiconductor at the time.

‘They Grow Fast, They Grow Big, and They’re Very Dramatic’

At Fairchild during the 1960s, Valentine was among the first to market and sell the silicon chip, the technological breakthrough at the heart of the digital age. “This was [a] product everybody had been waiting for; they just didn’t know it,” he said.
He co-founded National Semiconductor in 1967, serving as a senior sales and marketing executive. By the early 1970s, however, “people who were interested in starting companies often gravitated to me to help them start their company,” he said.
In 1972, he established the venture firm that would come to be known as Sequoia Capital, naming it after the redwood trees of Northern California.
”They grow fast, they grow big, and they’re very dramatic,” he later said, “and I was indirectly trying to imbue the companies of the fund with those kind of credentials.”
Sequoia’s first investment was in Atari, the pioneering arcade and home video game company. Valentine later met a young Atari employee named Steve Jobs. With a $150,000 check in 1978, he became one of the earliest investors in Apple Computer.
“When we invested in Apple … nobody had a personal computer,” Valentine said in the 2009 interview. “The cheapest computer was $250,000. And Steve’s vision was, we’re going to make them so that everybody will have one. Pretty simple.”

Looking for Big Markets, Leading with the Right Questions

Throughout his career, Valentine funded and advised entrepreneurs who went after big markets—the one for personal computers with Apple, for databases with Oracle, and for routers with Cisco Systems, the networking company Valentine led as chairman for three decades. He often encouraged entrepreneurs and would-be entrepreneurs to develop their listening and storytelling techniques. And he was known for asking startup founders,  “Who cares?” in response to their pitches, urging them to hone their own ability to ask the right questions.

“My middle initial is T for Thomas, the doubting person,” he said in the 2009 oral history interview, noting that his natural “inquisitiveness and inclination not to believe what I was told or heard” had served him well as both an entrepreneur and venture capitalist.

It’s a skill that he saw in Apple co-founder Steve Jobs, “one of the best interrogators that I have ever either seen or heard,” Valentine said. “Somehow or other he knew what to focus on and how to build a sequence and series of questions that were additive to the answers.”

Valentine stepped aside from leading Sequoia in the mid-1990s, though he stayed involved with the firm, which has since expanded beyond Silicon Valley to Israel, China, and India, and partnered with companies including Google, LinkedIn WhatsApp, and YouTube. 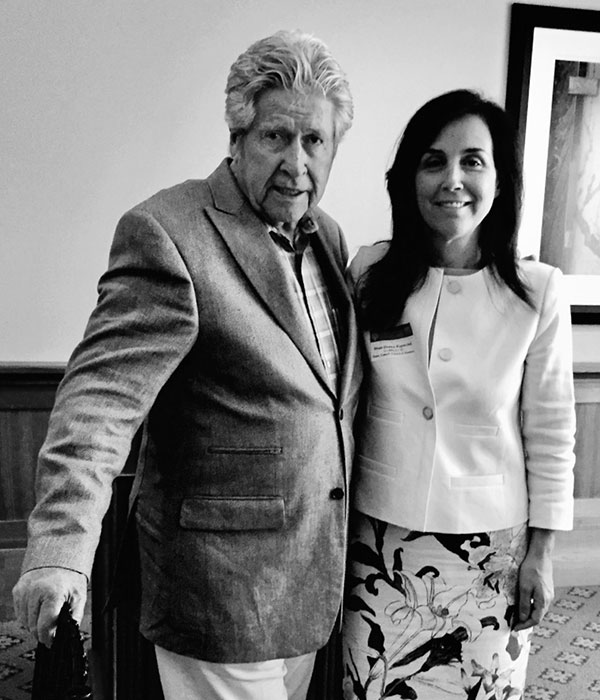 In recent years, Valentine met with students and alumni of Fordham’s Gabelli School of Business at the University’s annual entrepreneurship dinner in Silicon Valley.

“In a few short minutes, Don proved to be a great teacher and mentor,” Chase McQuillan, GABELLI ’17, told Gabelli Connect in July 2015, when he was a rising junior at the Gabelli School and a member of the Fordham Foundry, the University’s hub for innovation and entrepreneurship.

“Don Valentine was an incredible pioneer in so many ways,” said Donna Rapaccioli, Ph.D., GABELLI ’83, dean of the Gabelli School of Business. “It was a privilege to spend time with him on several occasions—he pushed me and everyone around him to think more strategically and to tell a more compelling story.”

Valentine is survived by Rachel, his wife of 58 years; their three children, Christian, Mark, and Hilary; and seven grandchildren.