skip to main content
Return to Fordham University
You are at:Home»Fordham Magazine»Director Jay Bulger Earns Top Prize at SXSW for Documentary on Ginger Baker
Photo by Bruce Gilbert
Jay Bulger thought he’d be middleweight champion of the world by now. But after earning a Fordham business degree in 2004, the former Golden Gloves boxer became a high-end fashion model, reinvented himself as a music video director, and bluffed his way into writing for Rolling Stone.

This past March, his first feature film, Beware of Mr. Baker, a documentary about drummer Ginger Baker, took the grand jury prize at the South by Southwest film festival.

“I told [Baker] I was a writer for Rolling Stone magazine, which was a total lie,” Bulger confesses in the film. “But that was my in.” 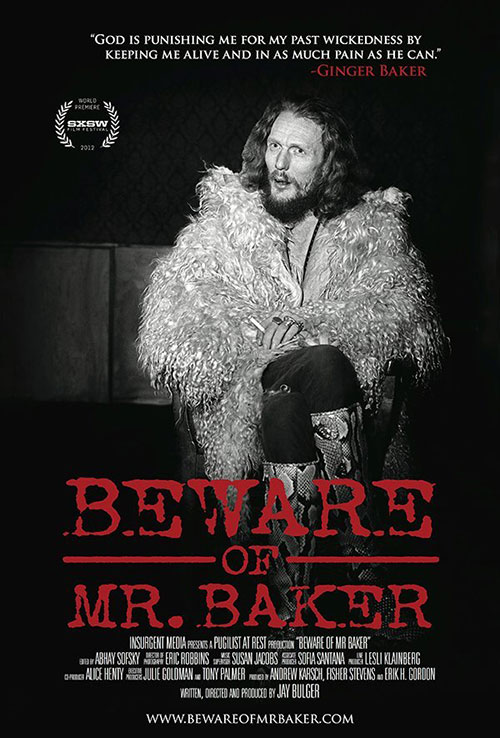 The wild-man drummer of 1960s supergroups Cream and Blind Faith was living on a farm in South Africa, suffering from degenerative arthritis and the effects of long-term heroin use. Bulger spent a couple of months with him, then returned to the States to make his lie true. Rolling Stone published his article in August 2009, and it helped him raise the funds to make the film.

“I’m really good at lying to myself,” Bulger said. “It has its downsides, but without having manipulated myself into thinking it was possible [to make the movie], I would’ve written it off.”

When Bulger returned to South Africa to finish filming, he didn’t always find an easy subject. In the movie’s first scene, a cantankerous Baker smacks Bulger with a cane, breaking his nose.

But images of a bloodied Bulger tend to bring good fortune. In 2002, after a Golden Gloves fight, the Daily News ran a photo of him that caught the eye of a model scout. Soon, Bulger was traveling the world and getting paid handsomely, but he had a hard time taking the job seriously. He used his modeling money to make music videos for local indie bands until fall 2007, when he was diagnosed with basal-cell carcinoma near his left eye. “That was a good exit” from modeling, he said, though he recently made a comeback, posing for Joseph Abboud’s fall collection as an award-winning filmmaker.

As Bulger was contemplating his next film project, he landed a role in Stand Up Guys, a movie due out in January starring Al Pacino, Christopher Walken, and Alan Arkin.

During filming, Bulger asked Walken for some pointers on the set. “I was like, ‘Hey, so I’ve never really done this, but I was a boxer, does that apply?’ And he was like, ‘Jay, I’ve got a tip for you,’” Bulger said, imitating Walken’s cadence and New York accent. “‘Just pretend like it’s real.’”