For Lauren Duca, FCRH ’13, simply being a member of the media industry has become a form of political activism.

Duca, a contributing editor at Teen Vogue, came into the spotlight after one of her articles, “Donald Trump Is Gaslighting America,” went viral last December. Since then, she’s been praised on Chelsea Handler’s Netflix show, berated on Tucker Carlson Tonight, trolled on Twitter, and profiled in The New York Times. So, many of the almost 50 students who gathered to hear her speak on the Rose Hill campus on March 6 nodded in agreement when she made the connection between their intended field and political engagement. 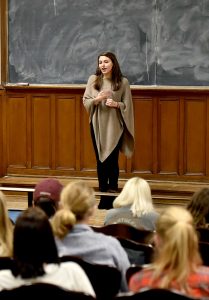 Natalie Zisa, a Fordham senior and the outreach coordinator for Fordham’s branch of the communications honor society Lambda Pi Eta, said the way Duca has handled both her sudden fame and her responsibility as a journalist has sparked a fire in her.

“I see her as a role model for myself and for a lot of other young female writers,” she said. After Zisa discovered that Duca is a Fordham grad, she and a communications professor decided to invite her to campus to speak to students about the role of young people in politics and the future of journalism.

During her talk, Duca encouraged students to be dedicated to both the truth and their own voice, which she said she first started developing at the paper, a student publication at Fordham.

“The conversation online is often just about asserting things,” she said. “People do things like take each other’s anonymous sources. It spreads a contagion of unreliability. You have to remember that things are taken and distorted much quicker online, so think about your journalistic responsibility there. You want to be empowering the public with truthful information—especially now, when there’s so little trust in the media.”

But she reminded the students not to forget themselves in the process. “Be aware of the power in passionate idealism. As long as you’re informed, don’t let people tell you that you’re less than or separate from because of your youth. Just make sure your analysis is driven by the truth.”

Duca said that critics who assume that she and other young women can’t write about politics because they also write about celebrity culture are “denying me access to a political conversation and participating in this stealthy condescension that many women feel is familiar. You’re going to be taken less seriously because of your age as it is, free of gender. So insist on being taken seriously.”

That’s why Duca’s new Teen Vogue column is called “Thigh-High Politics.” She said she’s proud to work for a magazine that covers everything from shampoo commercials to the Pulse nightclub shooting, and that acknowledges that all of these are “just another piece of your world.”

“There’s this idea that women’s journalism isn’t serious journalism,” said Zisa, who admires the way Duca pushes against that misperception. 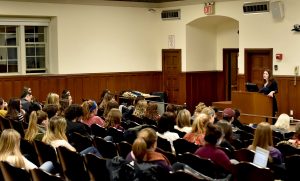 Duca answers a question during her talk

Throughout the talk, Duca offered a wide range of practical advice to students interested in the media field—on everything from the benefits of finding a first job that allows for movement to the advantages and disadvantages of freelancing.

She also urged students to start approaching contentious conversations differently and to develop a more nuanced view of both the media and the world.

“Call-out culture is unproductive. Everything is complex. Checking structures of power is important, but think about what the full story is. It’s easy to just be mad,” Duca said. “Nobody is unbiased. Only the facts are unbiased.”