skip to main content
Return to Fordham University
You are at:Home»Fordham Magazine»Books»A Radical Faith: The Assassination of Sister Maura 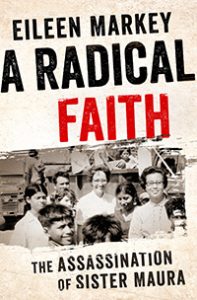 In this deeply researched biography, based on government documents (many still heavily redacted), personal correspondence, and interviews with family members and others, Eileen Markey tells the story of Sister Maura Clarke, a Catholic nun who lived and died at “the intersection of religious conviction and political action.”

On December 2, 1980, members of the El Salvador National Guard killed Clarke and three other American churchwomen who had been providing food, aid, and medicine to local peasants, and had been suspected by the government of being subversives. The murders occurred near the start of a 12-year civil war that would leave more than 75,000 people dead and spark years of debate about U.S. policy in El Salvador and throughout Latin America. (The U.S. government ultimately provided $7 billion in aid to El Salvador during the war, supporting the military dictatorship’s effort to prevent left-wing guerrillas from coming to power in the country.)

Markey chronicles Clarke’s life with compassion, from her roots in New York City as a daughter of Irish immigrants to “a hastily dug grave at the edge of the cold war.” It’s the story of a woman who “threw in her lot with disregarded people, and in doing so grew bold.”