skip to main content
Return to Fordham University
You are at:Home»Editor's Picks»10 Fordham Magazine Stories from the 2010s

As the decade comes to a close, we thought we’d share just 10 of our favorite cover and feature stories from the 2010s. We selected tales of post-9/11 military veterans, addiction recovery, the real-life hero of a Steven Spielberg spy movie, the canonization of the first Native American Catholic saint, the mysterious, wily ways of New York City rats, and more.

Take a look and, as always, share your thoughts and Fordham stories with us at fordhammag@fordham.edu.

In our fall 2014 issue, we featured some of the many Fordham veterans of the wars in Iraq and Afghanistan, including Kevin Flores, who was just 3 years old in the early 1990s when his family fled war-torn El Salvador and eventually received amnesty in the U.S.; Fordham Army ROTC alumnus Erik Haas, who earned two Purple Hearts and two Bronze Star Medals for valor during his six years on active duty; and Danielle Scalione, who served as a U.S. Army intelligence officer in Kandahar Province, Afghanistan. 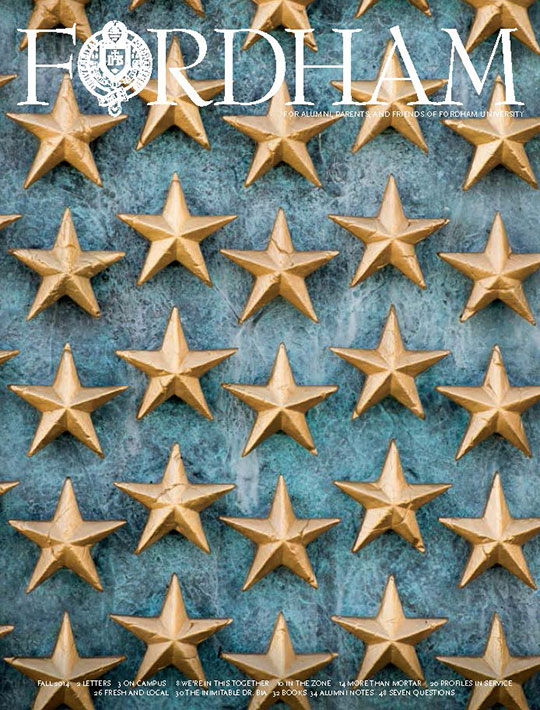 Cosmic Connections: On the Life and Legacy of Nobel Laureate Victor Hess

An image of a Nobel Prize medal graced the cover of our fall 2011 issue. But it isn’t simply a stock image of the prize; it’s an image of the medal that physicist Victor Hess earned in 1936, two years before he fled Nazi persecution in his native Austria and found a permanent academic home at Fordham University, where he taught and conducted research until his death in 1964. The medal, which Hess earned for demonstrating the existence of cosmic radiation, was graciously loaned to us by Hess’ grandson Bill Breisky. In “Cosmic Connections,” Breisky recalled the personal life, legacy, and faith of the Nobel Laureate.

“A scientist, more than other scholars, spends his time observing nature,” Hess wrote during his first decade in America. “It is his task to unravel the mysteries of nature.” 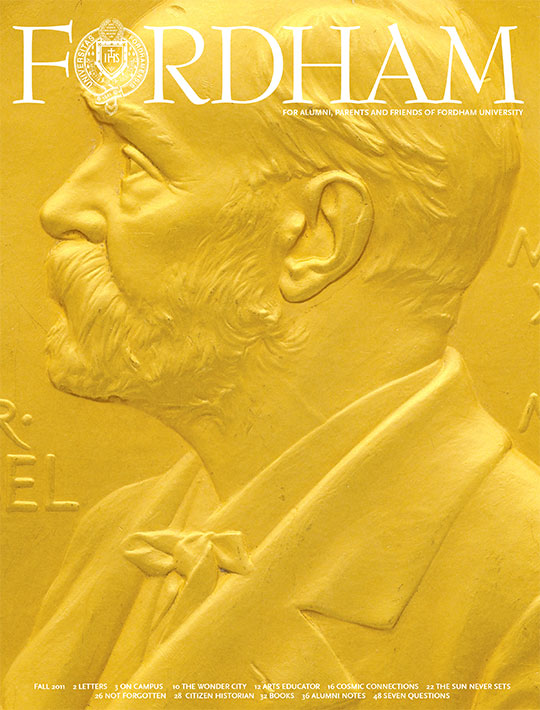 On March 27, 2017, the Empire State Building was lit up in Fordham maroon to celebrate the University’s 175th anniversary. We featured an image of the building on the cover of the spring 2017 issue, and used the occasion to highlight a group of 20 young alumni—all in their 20s—who are amplifying the spirit of passionate engagement that has been at the heart of the Fordham mission since 1841. The people we featured include a physicist who trekked to the South Pole to map light left over from the Big Bang, a U.S. Foreign Service officer who was preparing for her first diplomatic post, and a dancer with scoliosis who rose to become one of the breakout stars in her field. 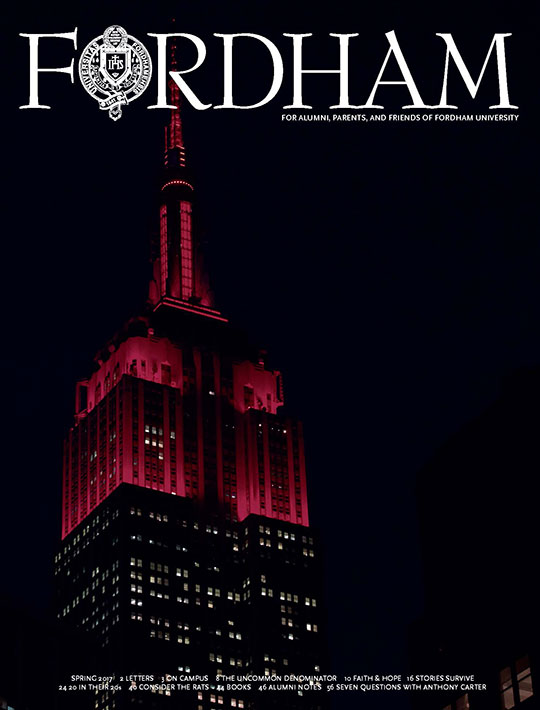 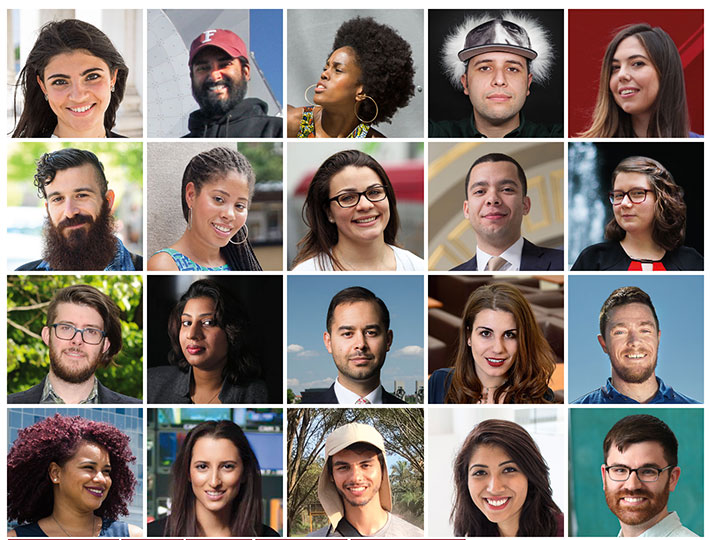 It was equal parts pep rally, comedy show, and religious revival at Rose Hill on Sept. 14, 2012, when Stephen Colbert joined Cardinal Timothy Dolan and James Martin, S.J., to talk about humor and the spiritual life. On the cover of the fall 2012 issue, we featured the trio as illustrated by then Fordham senior visual arts student Tim Luecke, who went on to become the lead animator on The Late Show with Stephen Colbert. 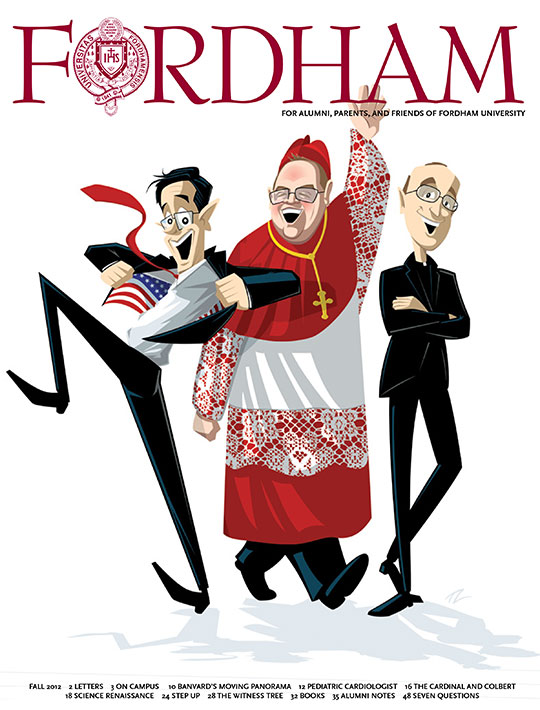 Coming Back from Addiction

In our fall/winter 2018 issue, we shared the story of Nancy Vericker, a spiritual director and youth minister and a 2009 alumna of Fordham’s Graduate School of Religion and Religious Education. After five difficult years, she and her husband, Joe, saw their son restored to health when he overcame his potentially lethal addiction to alcohol and opioids. But first, they had to make an agonizing choice.

Stories Survive: A Child Survivor of the Holocaust Reclaims a Resilient Heritage

In spring 2017, we published this story about Michael Bornstein, PHA ’62, a child survivor of the Holocaust who was reluctant to share his family’s full story, until he saw a picture of himself as a 4-year-old boy at Auschwitz on a website denying the Holocaust.

In spring 2012, we highlighted the Fordham connections to Blessed Kateri Tekakwitha—17th-century Mohawk maiden, patron of ecology and the environment—who later that year became the first-ever Native American saint in the Catholic Church. Who was she? What does her canonization mean? And was her intercession responsible for a miracle at Fordham in the early 1930s?

Consider the Rats: On the Ecology and Evolutionary Biology of the City’s Most Reviled Rodent

Where do rats come from, and how do they get around? In our spring 2017 issue, we featured the work of Fordham biologists who produced the world’s first in-depth genetic study of brown rats, and investigated the mysterious, wily ways of New York’s biggest scourge.

The Metadiplomat: The Real-Life Story of Bridge of Spies Hero James B. Donovan

Hollywood meets history in the real-life story of Fordham alumnus James B. Donovan, FCRH ’37, the gritty, principled Bronx-born attorney who faced down Nazis, the KGB, and Fidel Castro—and who was portrayed by Tom Hanks in Steven Spielberg’s Academy Award-winning 2015 film Bridge of Spies. On Oct. 16, 2015, the day Spielberg’s Cold War thriller was released in movie theaters nationwide, we published this feature story online. It was later the cover story of the fall 2015 issue, and it earned a 2016 CASE Circle of Excellence Bronze Award for feature writing. 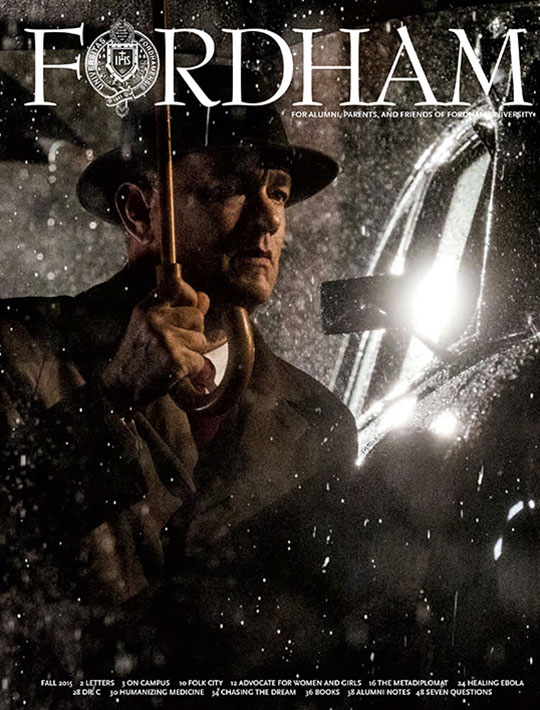 Rockin’ Rose Hill: A Look Back at Campus Concerts Since the ’60s

From the Beach Boys to the Kinks to the Ramones and U2—in fall 2013, we took a nostalgic look at the unexpected place Fordham holds in the New York music scene.