skip to main content
Return to Fordham University
You are at:Home»Commencement»Commencement 2022»Graduate School of Social Service Sends Grads off to Heal a Broken World
Photos by Marisol Diaz and Patrick Verel
On a blustery and bright day at Fordham’s Rose Hill campus, nearly 500 students from the Graduate School of Social Services converged on Edwards Parade, where they were hailed for embracing a sacred calling.

“My friends, you will never have a job,” said Joseph McShane, S.J., in his final address to graduates as Fordham’s president. 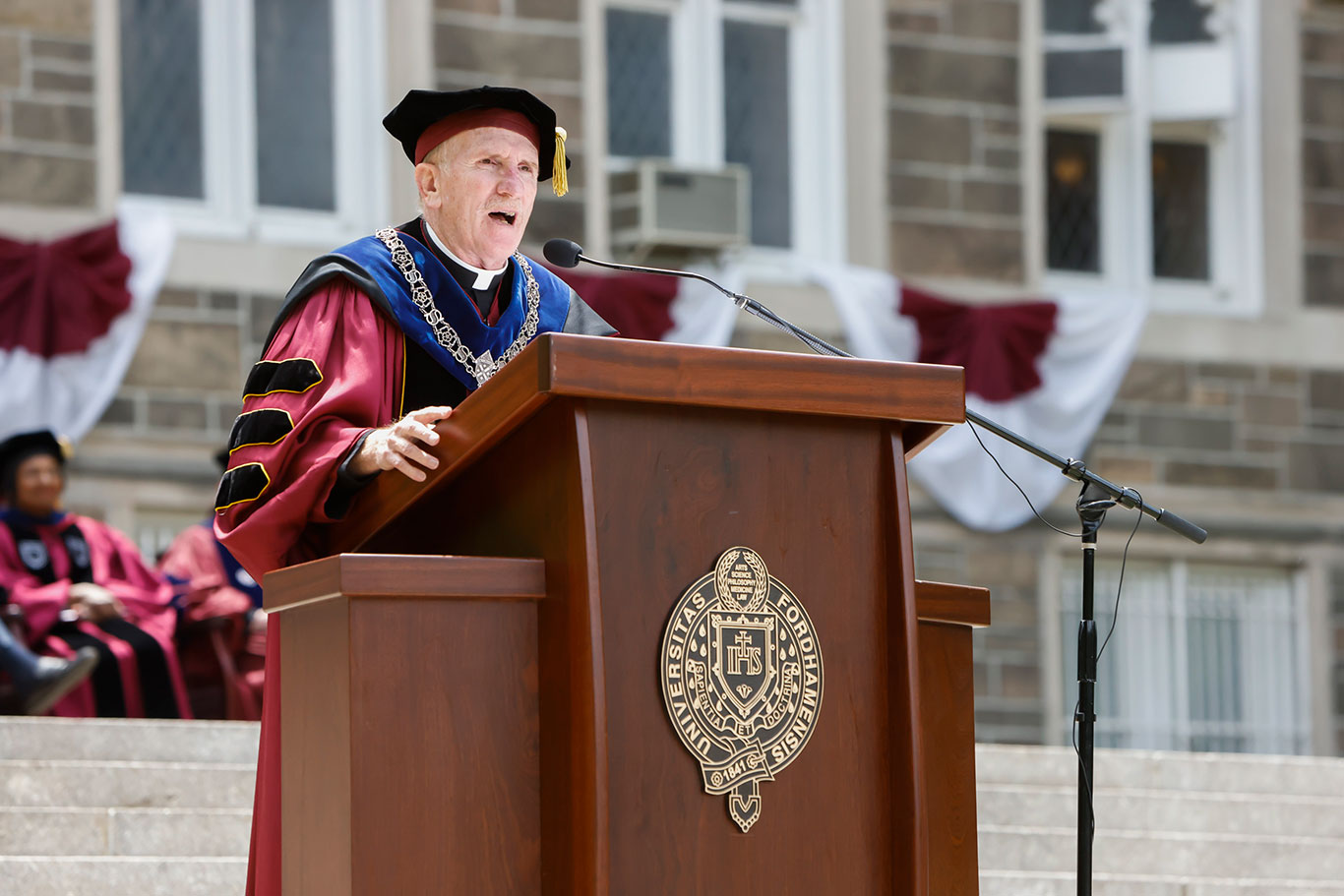 The ceremony featured the conferral of bachelor’s,  master’s, and doctoral degrees in social work, as well as an honorary doctorate of humane letters conferred upon Bill Baccaglini, former president and CEO of t he New York Foundling.

‘Because It Needs to Be Done’

Baccaglini told graduates that they deserve every bit of respect as is afforded to the great entrepreneurs and CEOs in this country.

“They built great companies and they’ve done big things, but ask yourself, have they ever sat with a distraught 4-year-old and told him or her that they couldn’t live with their mom any longer because it was unsafe? Have they ever counseled the family of a terminally ill person and talked with them about what the right time was to let their loved one go?” he said. 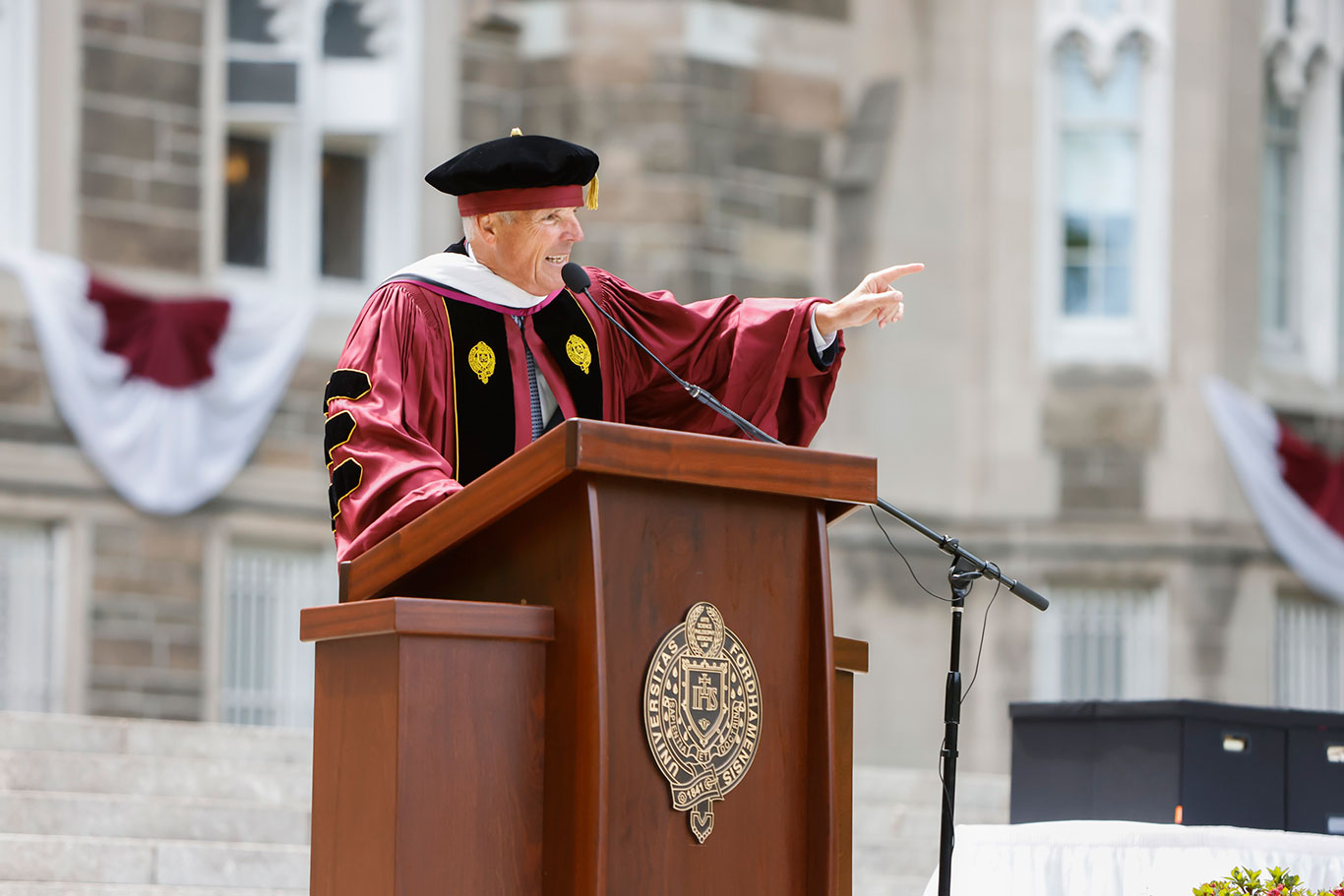 He cautioned that graduates should work for long-lasting change, and most importantly, he implored them to “have a life.”

“You will work 80-hour weeks when your teams are short-staffed, and you’ll always wonder, ‘What else can I do?’” he said.

“It’s the nature of the work and likely what brought you to it. You can try to be perfect and lose sleep when you’re not, but here’s the truth: You’re not doing your clients any favor, and you’ll be burnt out in just a few short years.”

Although the problems we face are numerous, Baccaglini said the COVID-19 pandemic had revealed to many what heroism looks like.

“We’ve seen enough suffering to know that the true heroes are those individuals who believe that the highest calling and greatest gift is to have the opportunity and ability to improve the lives of those around them,” he said.

Dean Urges Adaptation to New Challenges, But Not Acceptance 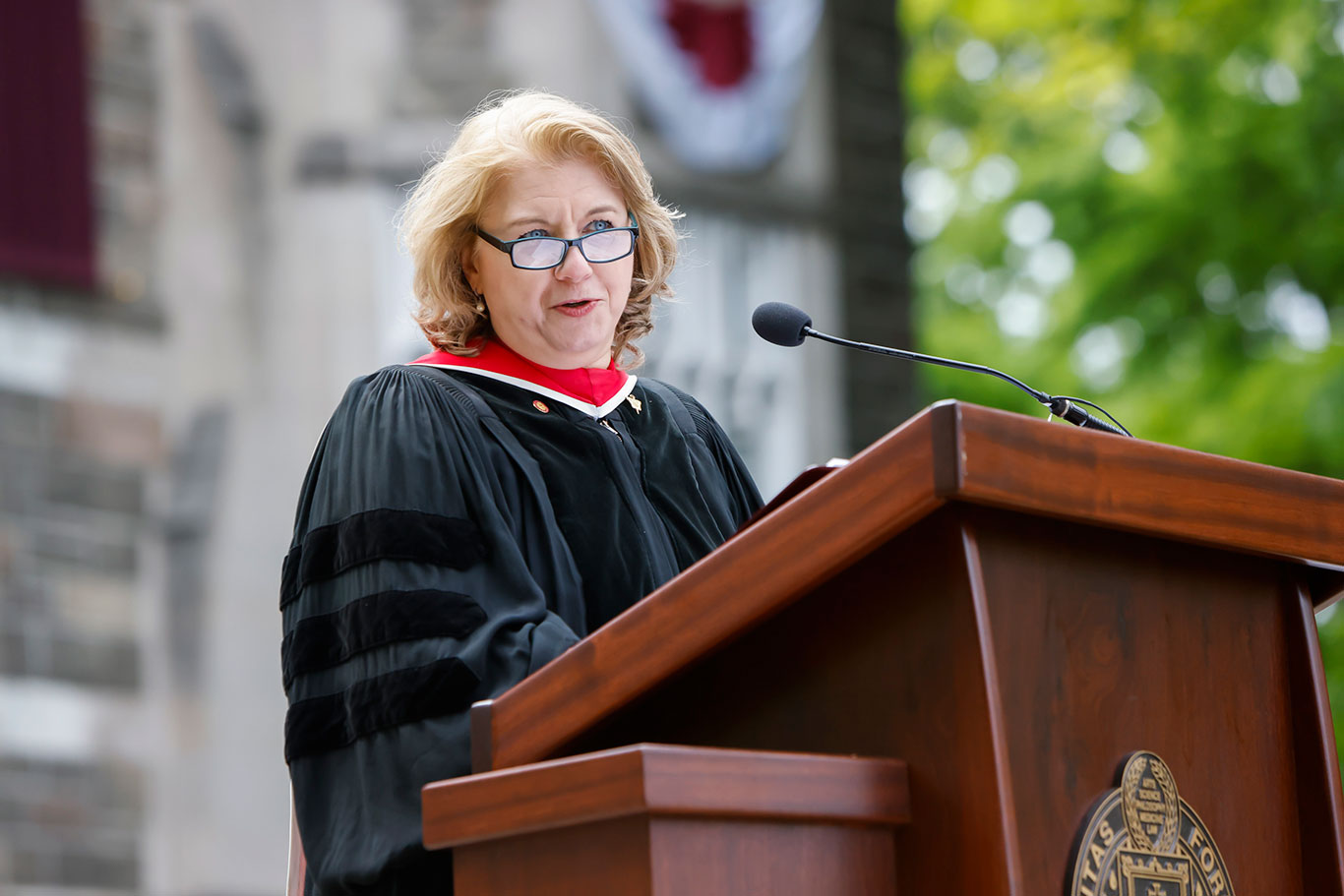 Debra M. McPhee, Ph.D., dean of the Graduate School of Social Service, called the graduates’ commitment an antidote to a surreal time when oppression is legitimized by leaders. The social work field is not the same now as it was when they started, but they’re equipped for the new reality.

“You already have learned a most critical lesson of adapting to the life that unfolds in front of you, as opposed to the one that you expected. I urge you, however, not to confuse adaptation with acceptance,” she said.

“Step into the uncertainty of the present but commit to building the future that you want to live in—a future not designed to protect the status quo, but a future that helps reset our collective moral compass, making unacceptable the conditions that perpetuate racism, violence, poverty, and the intentional disenfranchisement of whole communities.”

A Drum Call to Action

Vanessa Tricoche Pacheco, a member of the graduating class, serenaded those in attendance with a drum and song, and pronounced her classmates “the ones that our ancestors prayed for.” 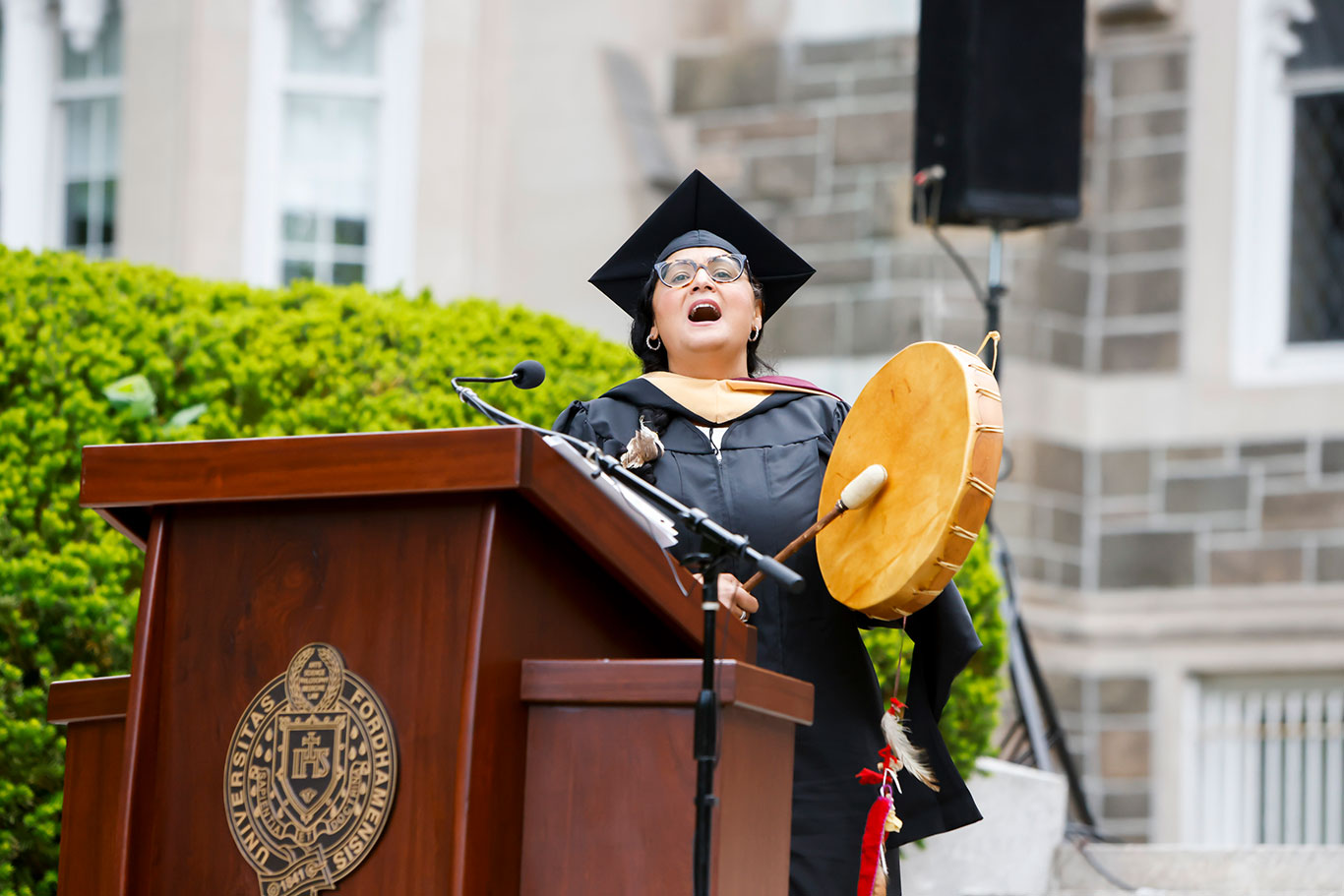 “We use the drum as a way to call to action,” she said after acknowledging the Munsee and Lenape indigenous peoples who called the land where Fordham sits home.

“Those who are living and those who have passed, we use our drum and voice to acknowledge, to cry, to celebrate, and to come to the present moment.”

The Class of 2022, she said, are a unique group of social workers who understand that they are on the front lines of building a new world.

“We understand what it feels like to sacrifice, pivot, shift, work, advocate, organize, occupy, decolonize, and co-create during very, very challenging times,” she said. 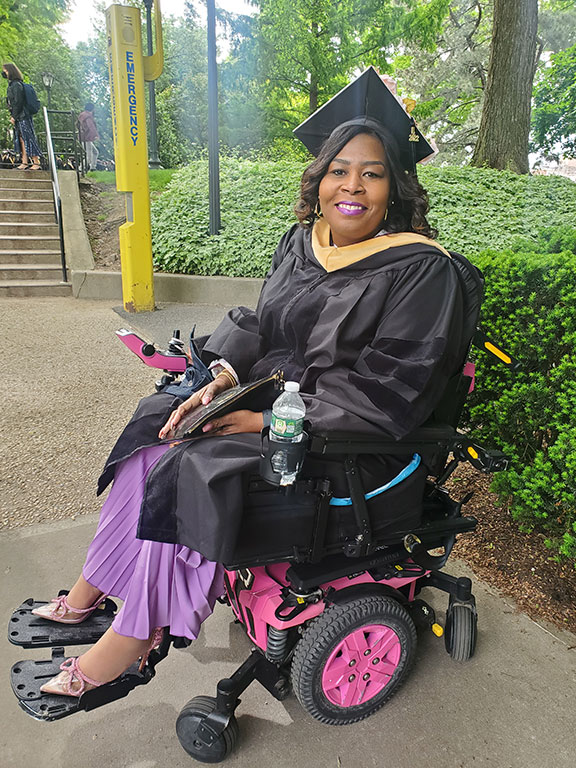 Several graduates echoed the importance of being present. Jessica Champagnie, a native of the Bronx who was paralyzed from the waist down by an errant bullet when she was 19, enrolled in the GSS online program because it felt safer than in person learning, she said. She decided to become a social worker because when she was shot, it was social workers who, along with her family and friends, helped her rebuild her life.

“I lost my father five years ago, and with these big achievements, it feels a little sad. But I worked hard, and he is here in spirit. I carry him in my heart, and I am proud of myself, and so is my family. So, I decided I deserve to come to this graduation,” she said.

“It was such a friendly and warm atmosphere, and to meet some of the people that I was going to class with on Zoom, it’s just, it’s like, ‘Yay, we did it, we came through!’” she said.

“There’s been a lot of screams and hugs and kisses and high fives.”

After Working 40 Jobs, a Desire to Be Part of the Solution

Vivek Sreekumar had graduated in 2003 with a Bachelor of Science in economics and had worked, “something like 40 jobs” before the pandemic hit. Inspired by his mother, Mridula Nair, he gave GSS a look. 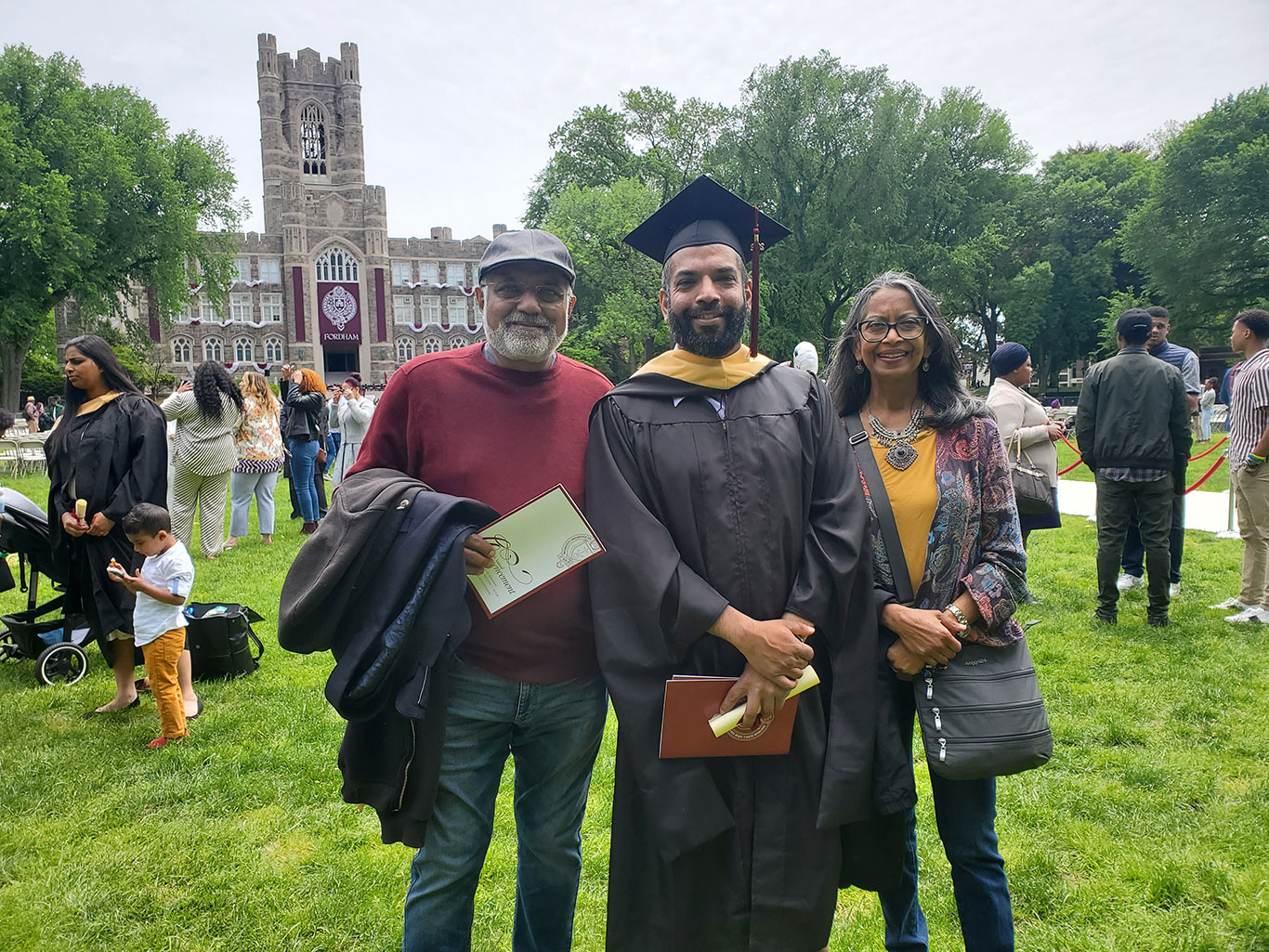 “Just seeing the devastation that was happening around us, I felt like I wanted to be part of the solution. I realized that social work was bigger than just clinical work, so now I’m focused on macro social work policy and advocacy,” he said.

His mother and father, Cumar Sreekumar, drove in from Rochester, New York, for the occasion. Nair, a scientist at Kodak Eastman for the last 42 years, said that her son was living her dream of devoting oneself full time to helping others.

“I always believe in serving people and giving things back. We all have so much. We forget those around us, and with just a quirk of fate, we could be one of the those who are marginalized by society,” she said.

“The more science and research I do, the more I wonder about all of the people around me, these amazing minds who have never been tapped into because they haven’t had the resources—and what can we do to make change?”