skip to main content
Return to Fordham University
You are at:Home»Commencement»Commencement 2022»Awards Ceremony Fêtes Lincoln Center Undergraduates
Photos by Miguel Gallardo
In a ceremony in the McNally Amphitheatre on May 20, Fordham College at Lincoln Center students, staff, and faculty showcased the attributes that make the Manhattan undergraduate college unique. Awards were given to honors students who’d completed a senior thesis, students who’d won prestigious fellowships, and students who’d been admitted to academic societies such as Phi Beta Kappa. 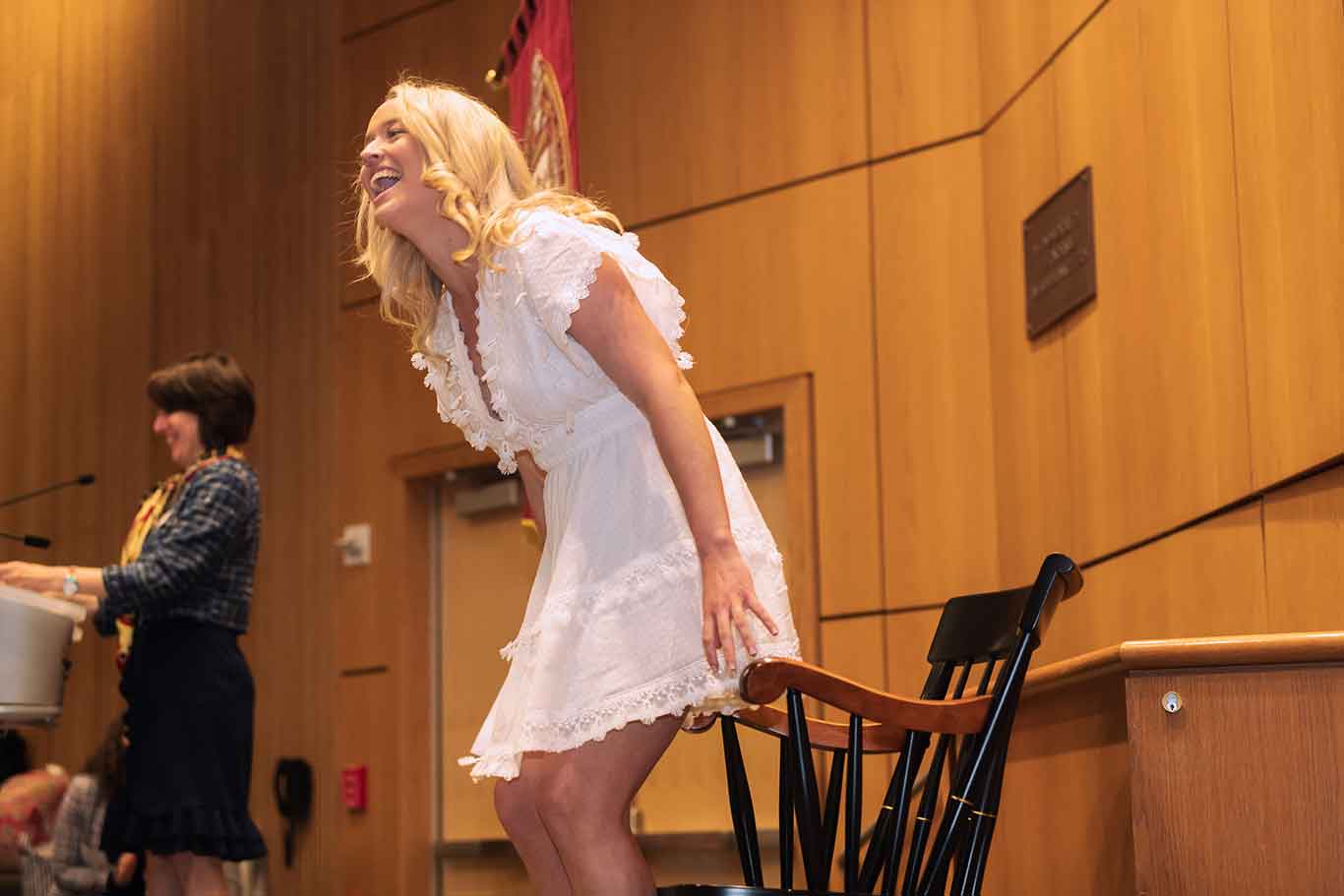 The FCLC Alumni Chair Award was given to graduating senior Lindsey Fritz, who was lauded as a “phenomenal ambassador for the Fordham community,” an energetic mentor for first-year students, and an enthusiastic team member at alumni events.

Awards were also given to students who’d excelled in disciplines ranging from the arts and sciences to the social sciences and the humanities. Four of them shared their thoughts about what their field meant to them. 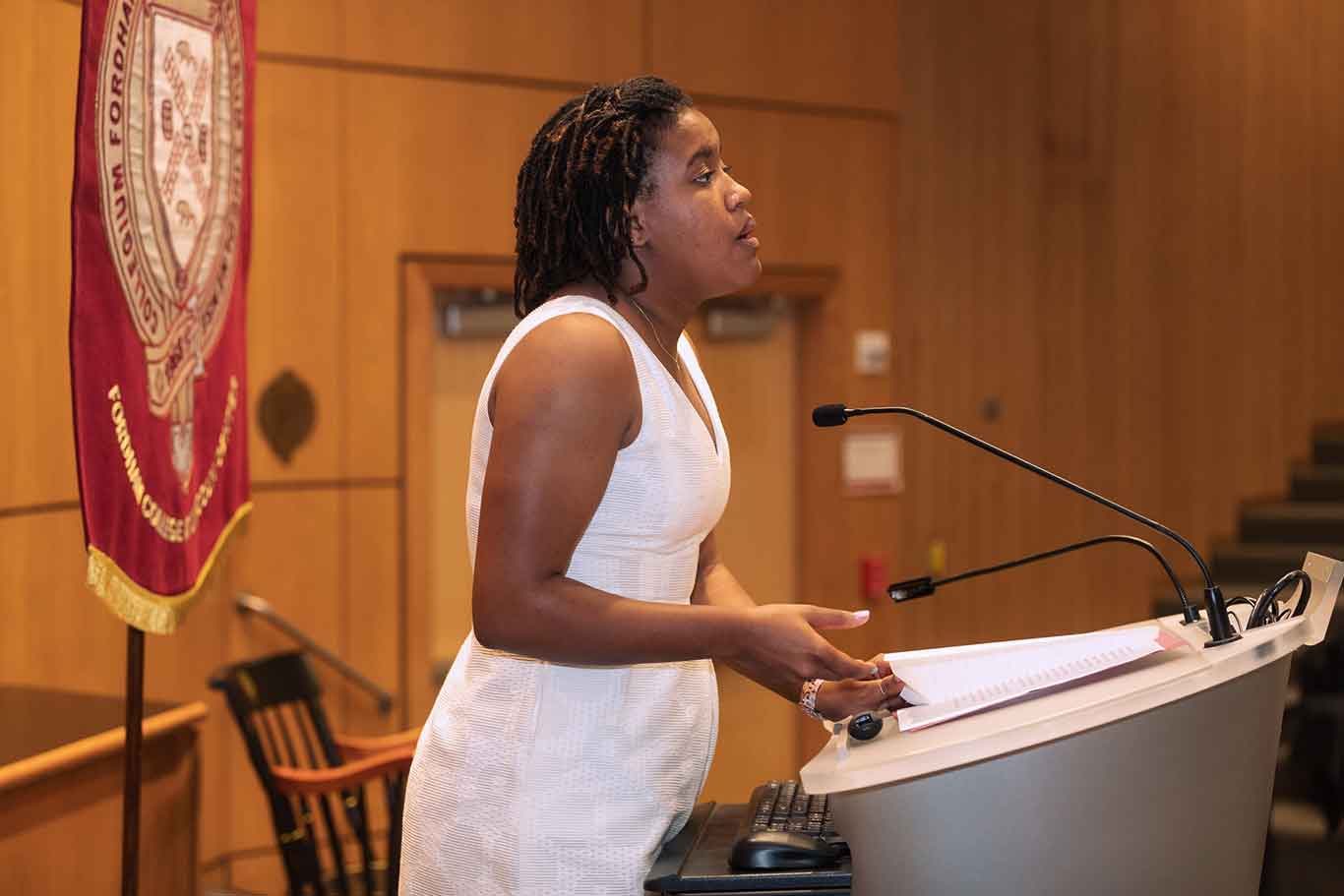 Marley Poku-Kankam, a junior enrolled in the Ailey/Fordham BFA program in dance who was asked to speak about the arts, said she was honored to be part of a community that has persevered, grown, and thrived. Attending the annual BFA benefit concert when it returned for in-person performances on May 2 after a three-year hiatus brought it all home for her.

“My heart lit up when I saw my friends and colleagues dance on the stage again. I was a volunteer at the event, and I was beyond amazed and inspired by the dancers,” she said. 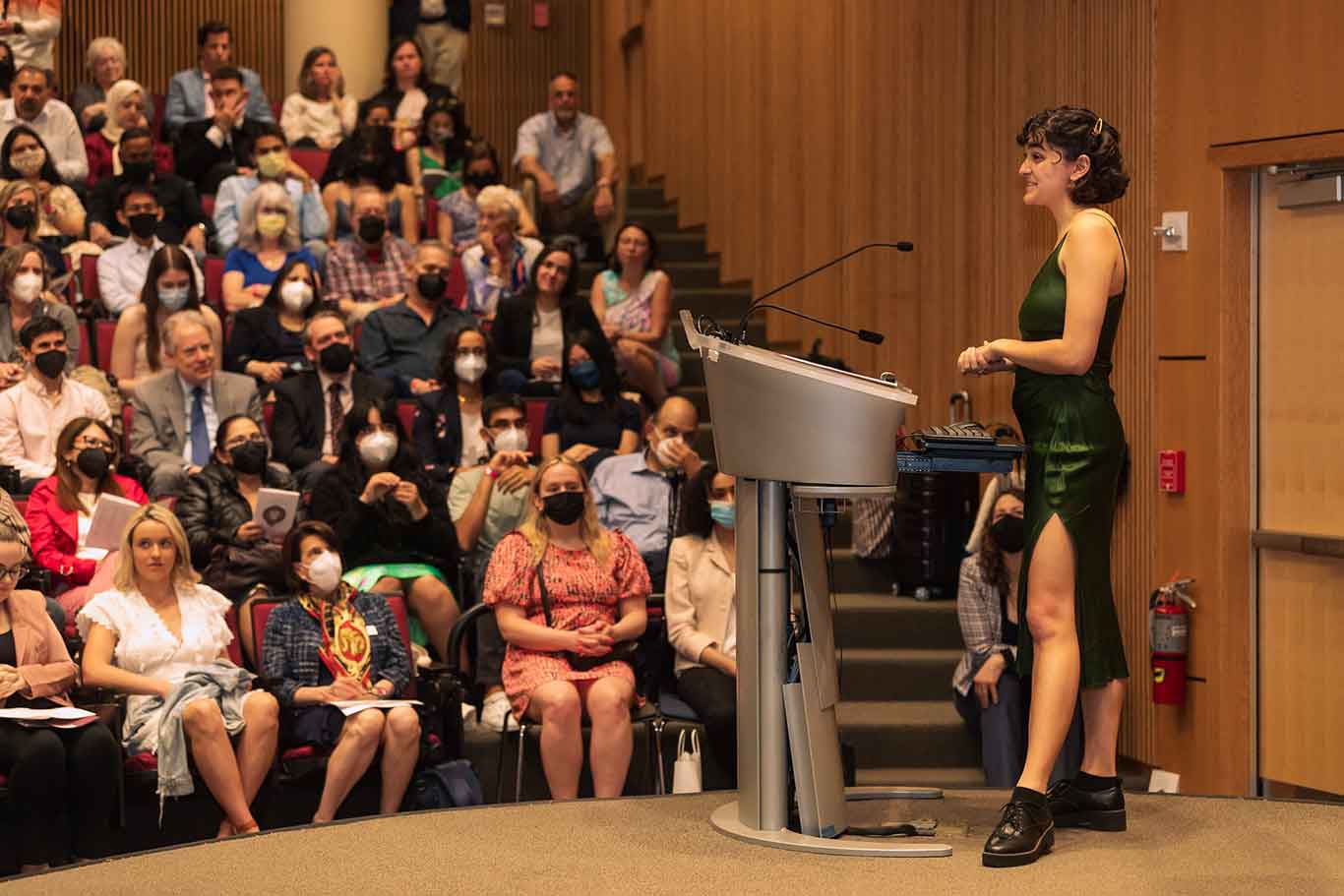 Shannon Rao, who would graduate with a Bachelor of Arts in English Language and Literature, talked about how the humanities gave her the ability to read with a critical eye and communicate effectively with specific audiences.

“The humanities have given me the skills to interact with the world, to understand it, and to, in my own small way, work to change it,” she said.

“I wanted to deeply examine this world that we live in, in my case through the lens of literature.”

‘Something Slightly Magical and Incongruous’

Batool Adelhafez, an anthropology and psychology major who was asked to speak about the social sciences, said she was grateful that her professors addressed fundamental issues of neocolonialism, capitalism, and stubborn barriers to mental health access. As a queer Arab woman, she noted that her identities naturally intersected with her studies. 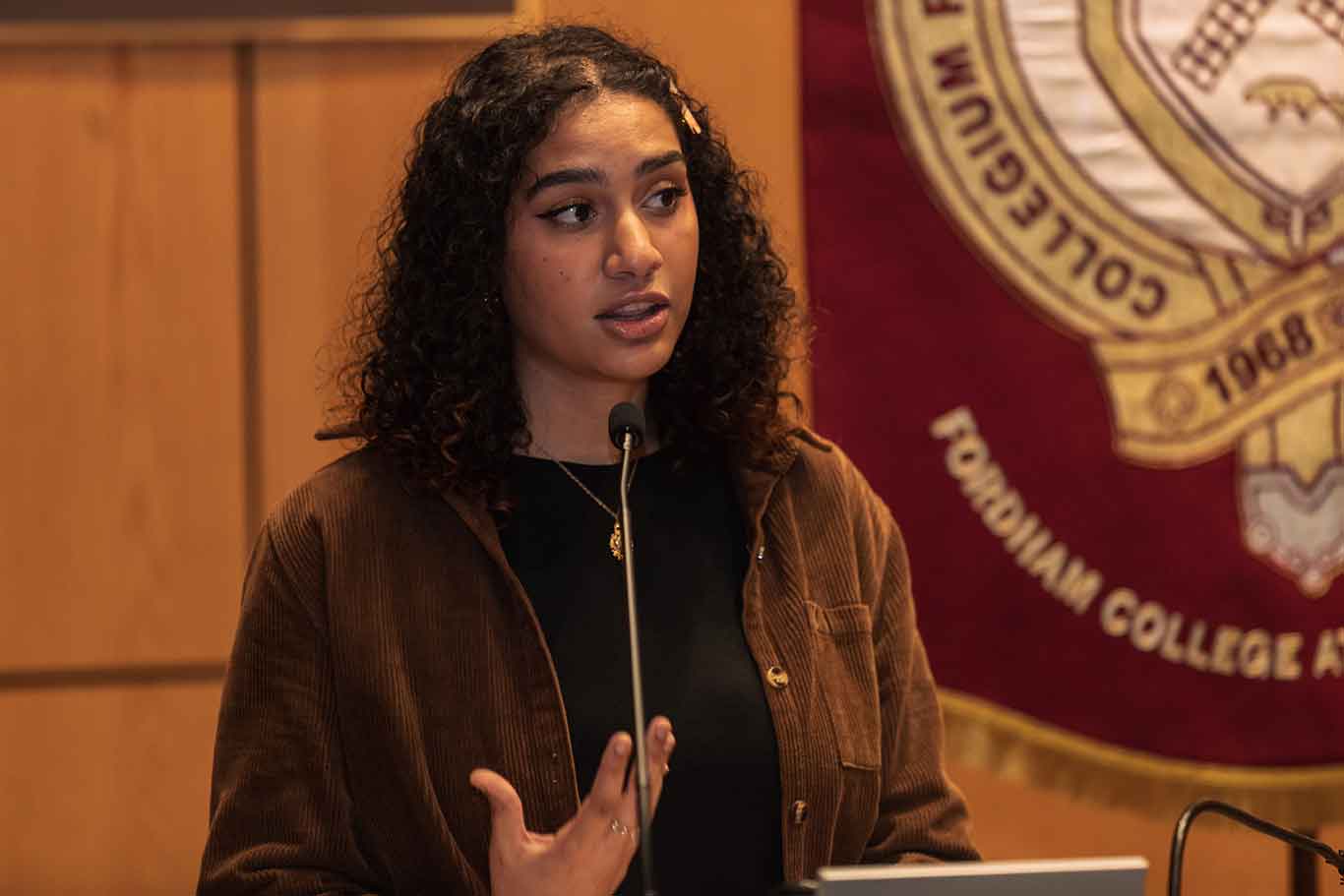 “In one semester, I had a class on psychopathology, and I had another class on global South megacities. Within these two classes, I drew connections between mental health disparities among the displaced, dispossessed, and marginalized communities,” she said.

“One of the most persistent lessons that FCLC has taught me is that no matter what I should do in life, I should do good for others and help those who need it.”

Vincenzo Harty, an integrated neuroscience and French studies major, joked that he was surprised to be asked to speak about the sciences, as he was “possibly the least science-y of science people,” and spent as much time around the arts as he did the science lab. 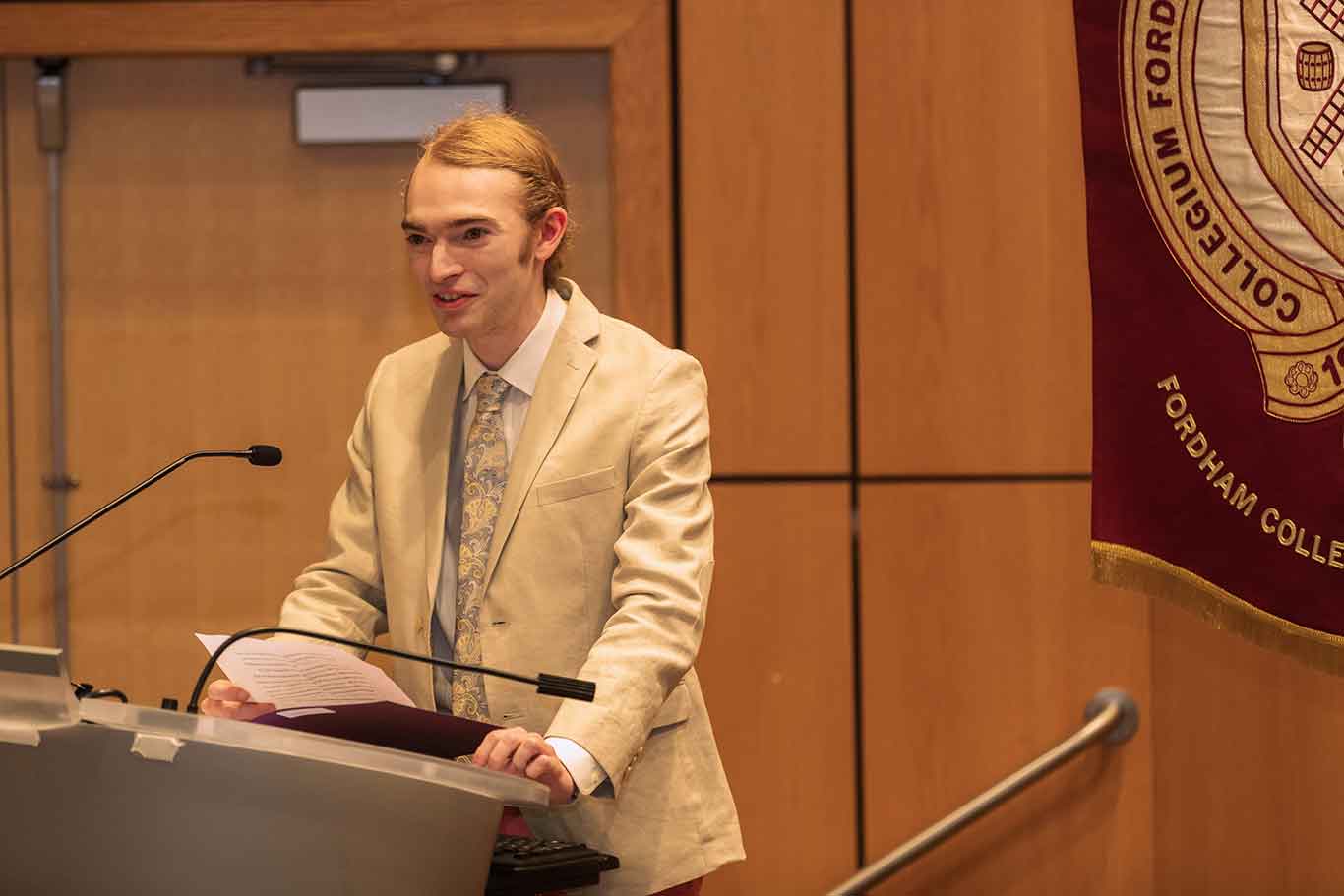 He credited Jason Morris, Ph.D., professor of biology, for introducing him both to Fordham and to integrated neuroscience.

“The science department here at Lincoln Center is unique and wonderful. It’s a great group of faculty and students who all feel like a family,” he said.

“There’s something slightly magical, and perhaps incongruous as well, in undertaking biology experiments in labs on the eighth floor of a Manhattan skyscraper with a view of the performing arts capital of the world outside the window.”

A First for FCLC

It was the first time FCLC held an awards ceremony prior to Commencement. When Laura Auricchio, Ph.D., became dean of the school in 2019, she learned that, unlike Fordham’s other undergraduate schools, FCLC’s awards had been presented at their diploma ceremony. She vowed to change that—starting in June 2020. 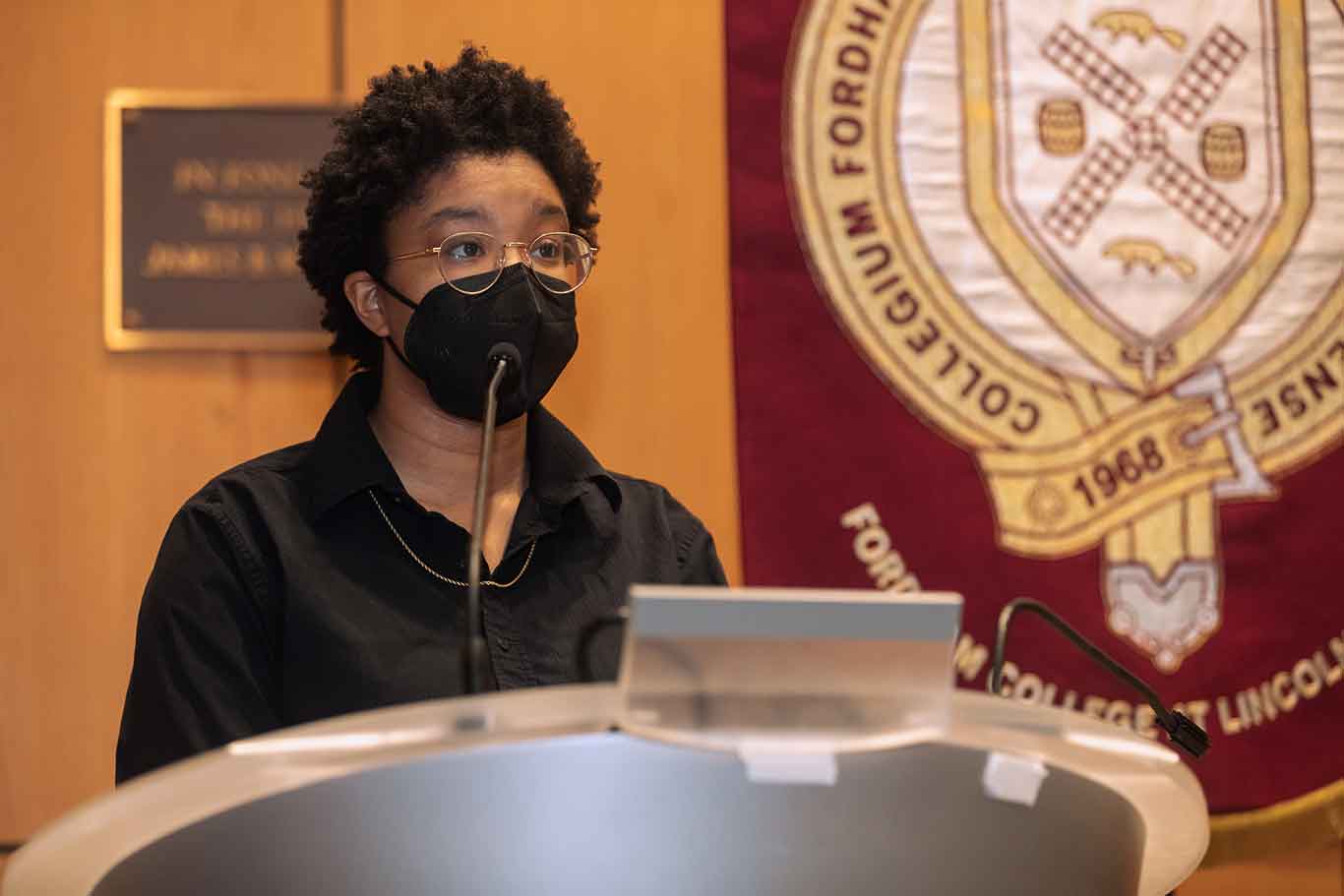 “Apparently, COVID had other plans for all of us,” Auricchio said to laughs from the crowd. “But after multiple false starts, here we are, three years later, belatedly fulfilling that promise.”

“Though each of our foundations is different, altered by our backgrounds and our hearts, they all have something in common. We chose Fordham, and with that foundation, we built a series one day, month, and semester at a time,” she said. 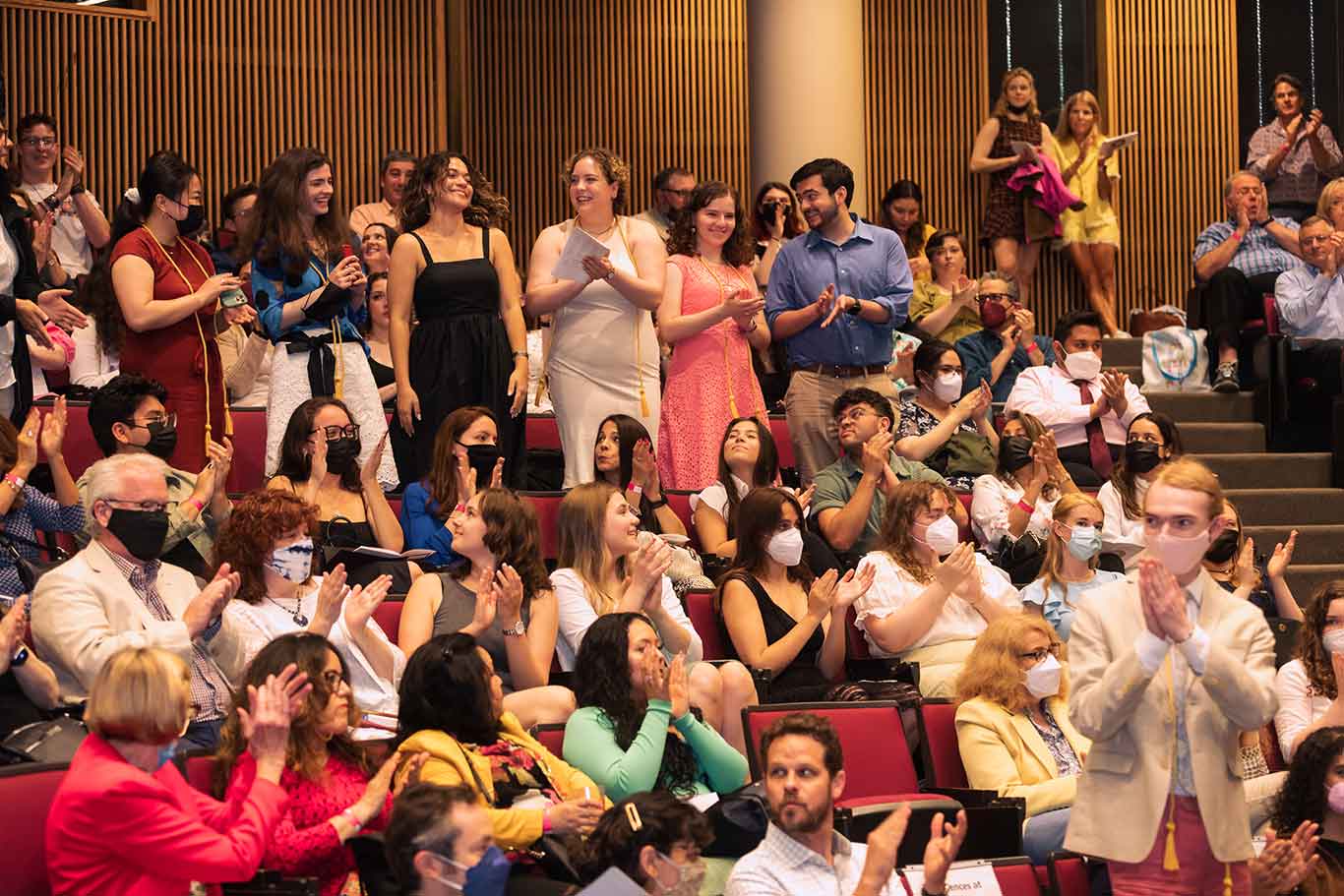 The gathering was the first stand-alone awards ceremony for FCLC

She encouraged her classmates to consider the difference between an award and a reward.

“An award is given in recognition of an achievement. A reward happens as a result of passion. Sometimes it’s given, and other times it’s completely intrinsic to the experience. Each of the awards given here tonight detail an achievement we should be proud of, remember, and celebrate,” she said.

The joy of making it to the end of “the season” and recalling how they made it, she said, is also a reward in and of itself.

“This intangible celebration, the electricity in the air as graduation nears, the reasons we never stopped going. … We did it. We did it. We won.”

“Thank you for making this finale as rewarding as it was exciting.” 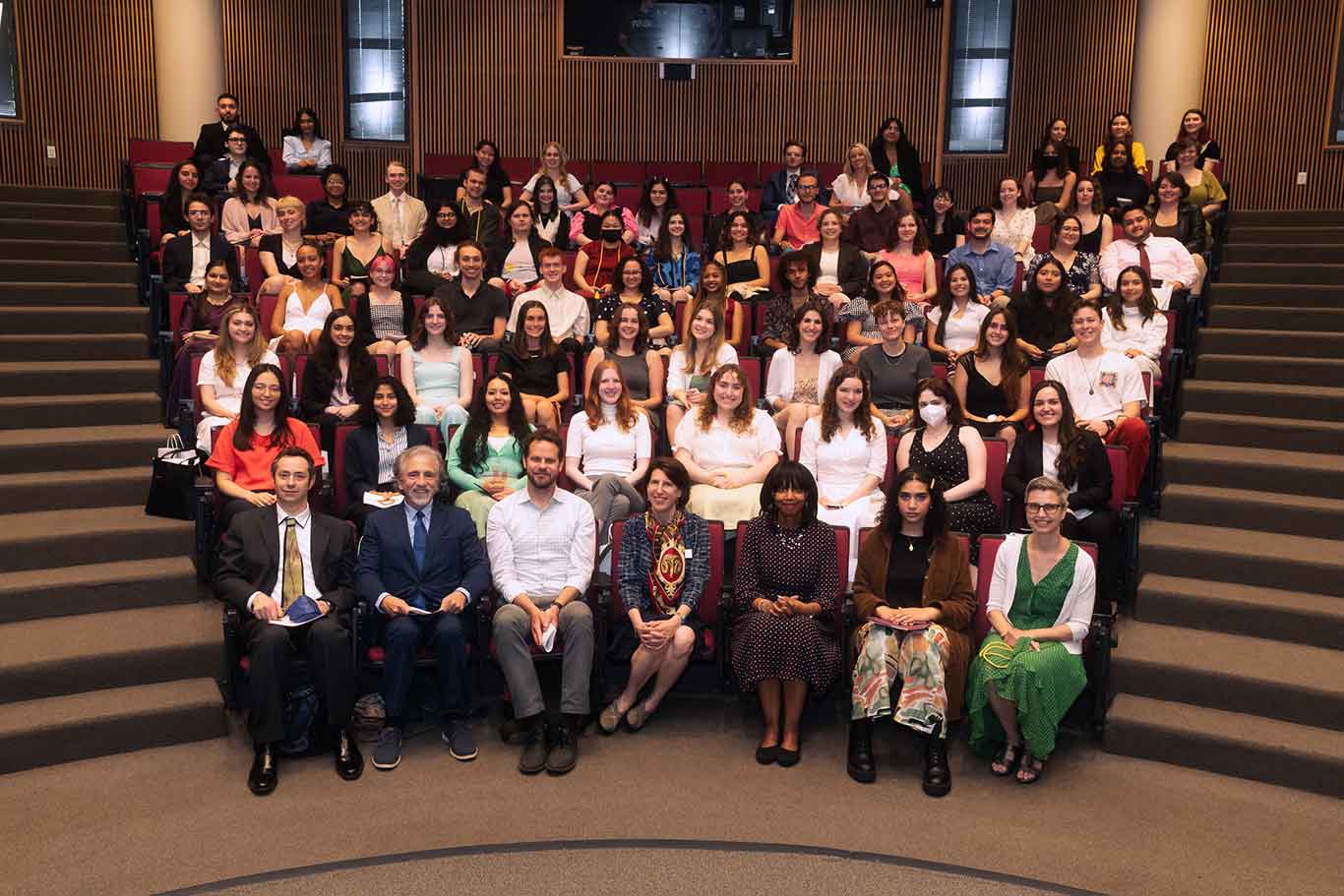