skip to main content
Return to Fordham University
You are at:Home»Commencement»Transform Yourselves and You’ll Transform the World, Shriver Tells Class of 2019

Timothy Shriver, Ph.D., chairman of the Special Olympics, ran, danced, and jumped his way into the hearts of Fordham graduates on May 18, delivering a rousing keynote address at Fordham’s 174th Annual Commencement.

“You have a choice. You have to decide which side you’re on. I hope you will choose to be a transformer and to be brave,” he said from the steps of Keating Terrace, where he had just led the crowd of about 15,000 people—including Joseph M. McShane, S.J., president of Fordham—through a rousing dance to the Sara Bareilles song “Brave.” 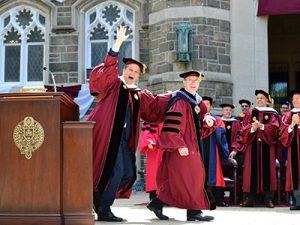 Shriver used his speech (full remarks here) to highlight the way the Special Olympics helps people overcome the tendency to look at one another as “the other.” Toward the end of his speech, he asked all assembled to imagine Keating Terrace as a track, and that he was a disabled 12-year-old competing in a race. With full academic gown on and 70-degree sun beating down, he then jogged from one end of the terrace to the other to the roar of the crowd. He told them to also imagine themselves as the runner, and shout out their own names as they cheered.

“We all share that sense of trying to carry so much woundedness, so much brokenness, and yet let it out. It’s what our country’s struggling with right now.”

That “othering,” he said, is responsible for what he called “a time for labels” in the United States, be they labels of political affiliation, race, sexual orientation, address, or income bracket. It has also led to a sense of division.

The country needs a new “operating system of the heart,” he said, and he implored the class of 2019 to be the class that invites the country to a new dialogue with itself.

“Ultimately, we’re much more naturally we than we are me. We start out as we. My beautiful grandson doesn’t know me, he only knows we,” he said. “You were a ‘we’ long before you were a ‘me.’” 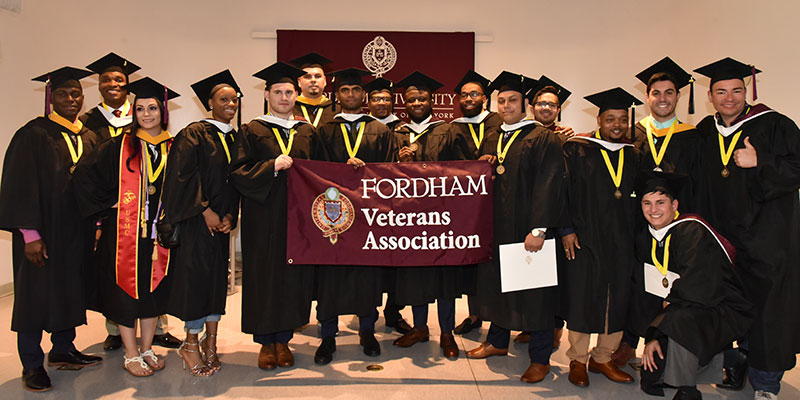 Veterans in the School of Professional and Continuing Studies

Father McShane echoed Shriver’s emphasis on the “we” in his own address to the departing class. He imparted to graduates five lessons for succeeding in the “curriculum of life,” which he said, is concerned with matters of the heart.

His lessons? Lead with love, don’t be paralyzed by adversity and complexity, don’t listen to those who promote rugged individualism, and be wise and humble enough to accept help.

“Love has its own rather peculiar calculus, a calculus that confounds mathematicians and leaves accountants agog, for according to love’s rules, subtraction is really multiplication,” he said.

“You have also learned from the experience of the loss of three much-loved members of your class that grief is the price we pay for loving, and that if we love someone deeply, the grief of loss is almost unbearable,” he said, referring to the deaths of Gabelli School student Rachel Ragone and Fordham College at Rose Hill students Donika Celaj and Sydney Monfries.

“The key word here, of course, is almost. Think about it. You would never regret or trade the love that you gave or experienced even in the face and experience of grief. Never.”

For his fifth lesson, Father McShane went back to the language of his Marble Hill, Manhattan, roots: “Don’t be a jerk.”

“At the end of the day, the class clown is just that: a clown. Cynics are self-absorbed dopes and crashing bores who take the joy out of life,” he said.

“As for know-it-alls, let’s be honest: They are tiresome. Avoid them. Don’t believe them. Dare to be the person whom everyone trusts.”

Finally, always remember that God is with you, even when you don’t know it or don’t want him to be, he said.

“On this day of days, this is my complex prayer for you: May God, who has begun such great work in you, bring it to completion. Don’t be jerks, don’t go solo, lean into life, and as Dr. Shriver says, ‘be your own best self every day.’” 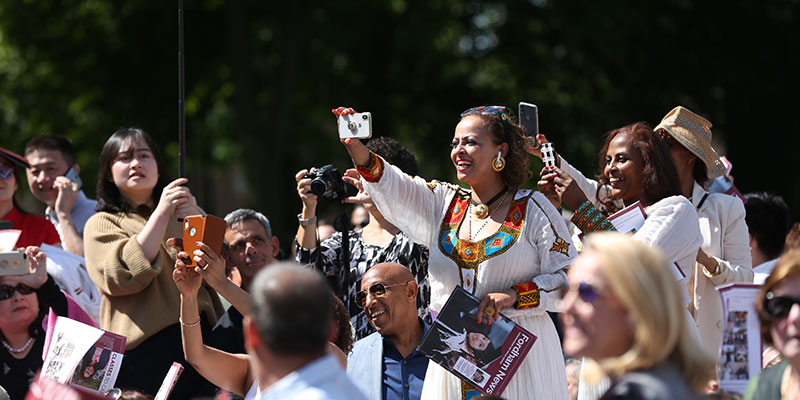 A Celebration for Families

For Brooklyn natives Cesar Martinez and Michelle Reyes, the day was particularly poignant, as they were accompanied by their parents and Alexis Adriana Martinez Reyes, their 15-month-old daughter. The international studies majors met while Reyes was working at the HEOP office at Fordham College at Lincoln Center, and were able to both complete their studies thanks to the support of their families.

“It was in the middle of taking midterms when she came, but it was nothing but a blessing. Everything comes down to the support of family members, friends, professors, everyone at Fordham too.” 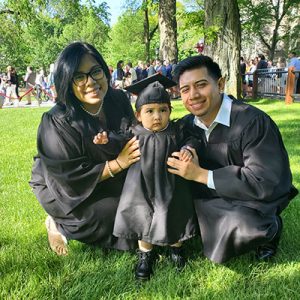 “It started off as a beautiful friendship, and it turned into something more beautiful, and now with this beautiful little one here, she’ll follow our footsteps at Fordham,” she said.

On the edge of Edwards Parade, Rose Gallagher, a resident of Stuyvesant Town whose daughter Danielle graduated from Fordham College at Rose Hill with a degree in general science and psychology, laid out a set of four beach chairs and a blanket for the dozen or so members of the family expected to attend. Her father, James Hoare, was a 1955 Gabelli School graduate who received his diploma at Rose Hill. Her husband John passed away in March, making for an emotional day.

“I’m very excited for Danielle. It’s been a tough semester. She lost a few weeks there, but she got back into school March 2, and she made up everything, and being a science major, that’s no easy feat,” said Rose.

In the front row of Edwards Parade, Reading, Massachusetts, residents Neil and Diane Cohen watched their oldest daughter Stephanie, a Fordham College at Rose Hill communications major and Spanish minor, graduate. She worked at WFUV and interned at Story Corps during her time at Fordham, and will be going to Madrid in late August to teach English for the year.

Diane admitted the moment was bittersweet, as it brought back memories of the first time they saw this campus, and since Stephanie’s younger sister is attending college in Massachusetts, it would likely be their last visit for some time.

“One thing we learned is that students want their parents to visit for a few days, and when you get there they want to be with their friends more than their parents. So we’ve had a lot of downtime,” she joked.

A highlight for them was attending a reception Thursday by history professor Mark Naison, Ph.D., who’d hosted students for a round of tennis at Rose Hill.

“Fordham has been a wonderful experience for her, and I know it’ll carry her far in life,” she said.