skip to main content
Return to Fordham University
You are at:Home»Commencement»Commencement 2019»Scholars Land National and International Awards
Photos by Chris Taggart, Robb Cohen, Margaret Ling, and Ben Hietala
For some students, the end of the school year marks a new milestone in their lives: the beginning of a prestigious scholarship, fellowship, or internship that will continue their academic journey.

As of May 9, Fordham students have received 81 prestigious awards this year, including seven Fulbright awards, one Coro fellowship, and one Udall scholarship.

Wesley Wilson, PCS ’19, received a full-tuition scholarship to attend the Maxwell School of Syracuse University, home to one of the most prestigious public administration programs in the country. But life wasn’t always so smooth for Wilson. At age 16, he became an orphan. On top of that, he had a high school G.P.A. of 1.6. Then his mother’s longtime friend stepped in.

“‘Your mother always believed that you would be the first one in the family to graduate from college,’” Wilson said, recalling her words to him. “At that point, it just kind of … set something in motion.”

He earned his high school diploma, served as a U.S. Army military police officer in South Korea and at the United States Military Academy at West Point for five years, and graduated with honors from American Military University. In 2017, he began studying organizational leadership at Fordham. In his two years at the University, he has served as president of the Fordham Veterans Association, rallied support for student veterans as a High Ground Veterans Advocacy fellow, and secured a national finalist position for the Student Veteran of the Year award.

When Wilson completes his M.P.A. at Syracuse, he plans on returning to his native South Carolina, where he hopes to someday serve as a senior official in the state government. 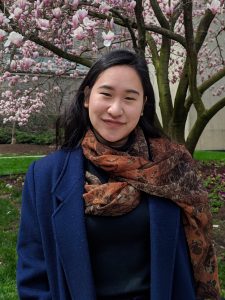 Sabrina Jen, FCLC ’19, is a new media and digital design major who won the Humanity in Action Fellowship. The selective one-year program trains students to develop projects that address social justice issues in their own communities. Jen will train in Poland for a month starting this June. When she returns to New York, she plans to use her new skills to create a museum exhibit that will showcase her Fordham senior capstone project.

“My capstone project was about addressing the perception of Chinese food among American people in the United States,” Jen explained. “People look down on it and treat it as cheap junk food. My parents are from Taiwan, and I’m ethnically Chinese, so growing up, my idea of Chinese food was a lot different from that.”

But her project wasn’t just about food. It was a vehicle to talk about the complexities of Chinese-American experiences and the Chinese diaspora across the world, she said.

“My ultimate goal is for New York City public schools to be able to teach more about Chinese-American immigration and history,” said Jen, who will pursue a master’s degree in ethics and society at Fordham this fall while working on her fellowship. 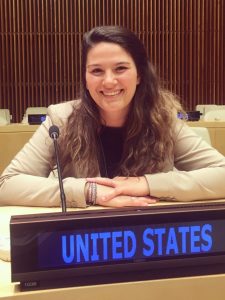 Kutsch is a double major in international political economy and Latin American and Latino studies and a Spanish minor. As an executive board member in Fordham’s Model U.N. club, she helped the University host its first high school Model U.N. conference at the Lincoln Center campus. Last summer, she interned with the State Department. And two years ago, she earned a Fordham undergraduate research grant that took her to Guatemala, where she investigated the interaction between indigenous artisans and different social enterprises.

“I’ve become more attracted to this idea of sustainable development: the ability to increase economic opportunity and equality in countries through interesting and innovative solutions,” said Kutsch, who plans to become a consultant or researcher in the field.

As of May 9, other prestigious awards won this year include:

Additional awards are still being announced.