skip to main content
Return to Fordham University
You are at:Home»Colleges and Schools»Graduate School of Arts and Sciences»In Gannon Lecture, Alumna Reflects on Daughter’s Life-Changing Car Accident
Martone at the Joseph M. McShane, S.J. Campus Center. Photos by Chris Taggart
When Marilyn Martone, GSAS ’95, learned that her youngest child, Michelle, had been struck by a car and suffered a traumatic brain injury, Martone began a long journey that would teach her what it means to be a caregiver and how to find meaning in a seemingly hopeless situation. In this year’s annual Gannon Lecture at Fordham, she reflected on that journey. 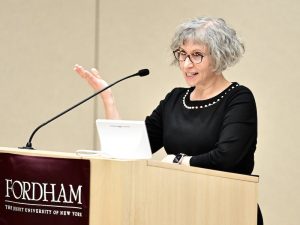 Ann Gaylin, dean of the Graduate School of Arts and Sciences, which presented the lecture

“Going through this adventure with my daughter has taught me what it means to be truly human,” said Martone, who spoke at the Rose Hill campus on Nov. 9. “The time I sat by her … when she was comatose was the most meaningful time of my life. It made me realize that persons with disability are discriminated against—not because of who they are, but because of who we are and what we wrongly value.”

Martone is an associate professor emerita of moral theology at St. John’s University in Jamaica, New York. She is the recipient of several awards, including a National Endowment for the Humanities grant on “Justice, Equality, and the Challenge of Disability” and a fellowship on disability ethics from Weill-Cornell Medical College and the Hospital for Special Surgery. She wrote and published Over the Waterfall, a memoir of her daughter’s accident, in 2011. Since retirement, she has worked with Ladies of Charity USA to establish a national homecare agency. In 1995, Martone earned her Ph.D. in moral theology from Fordham’s Graduate School of Arts and Sciences.

In her lecture “From Trauma to Disability: Examining Our Cultural Values,” Martone offered an emotional account of her daughter’s journey from her perspective as a mother and caregiver. In addition, she spoke about the shortcomings of America’s health care system and how our societal values marginalize those with disabilities.

On February 22, 1998, an elderly woman lost control of her car and hit several students from the University of Chicago, including Michelle. For nearly eight months, Michelle was unconscious. She had 10 brain surgeries, a respirator, and a feeding tube inserted into her stomach, said her mother—and she nearly died a few times. 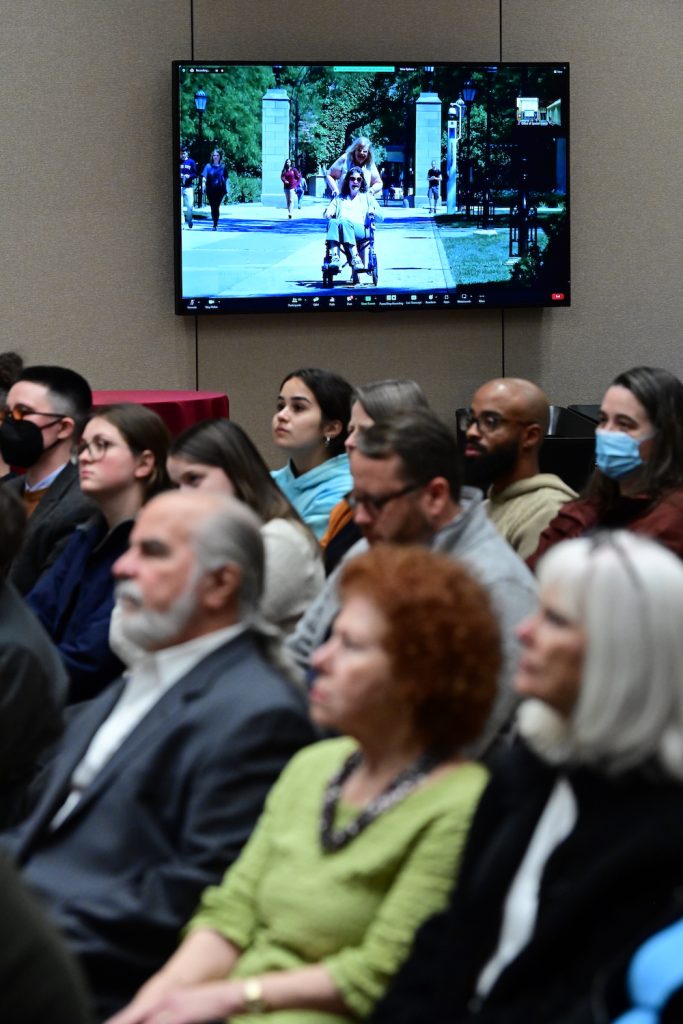 A scene from the documentary “Your Health: A Sacred Matter” featuring Martone and her daughter, which was showed on one of several screens throughout the room

Today, Michelle continues to live at home. She is able to use a walker to move around, answer her email, play games on her computer, and even go horseback riding, with the help of her family members and professionals. In 2016, she celebrated her 40th birthday with family and friends.

But during the two years following the accident, her family experienced a difficult journey through the health care system. When Michelle’s doctors determined that she would not be restored to independence in a short period of time, her care became less important to the system, said Martone. Everyone in the intensive care unit received the same level of care based on their needs, but those who left the facility without the possibility of a full recovery experienced disparities in care, she said. For example, she was able to get all the MRI scans she needed for her daughter, but after she left the hospital, it was difficult to find home care workers and therapists.

Michelle was discharged from one facility to another, including large research hospitals that underwent frequent changes in residents and staff, said Martone. In the process, Martone discovered that on her daughter’s medical records, someone had falsely written that she had undergone a lobotomy procedure.

When Michelle finally awoke, she began to make progress, but it wasn’t fast enough for her insurance companies, said Martone. “If a patient doesn’t respond quickly, she’s documented as having plateaued and services are cut back and soon eliminated,” said Martone.

Eventually, Michelle needed to move back home or into a nursing home. Thanks to money earned from a major lawsuit, they were able to afford the former, along with personalized care. Her condition improved with time and the help of professionals and close family members. But insurance only covered a few hours of daily nursing care, and Michelle needed round-the-clock care.

Too Much Emphasis on Independence 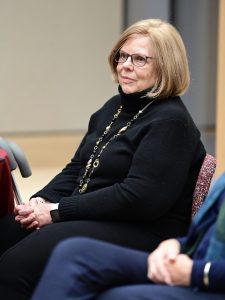 Throughout this experience, Martone said she has learned that people with chronic conditions, especially those who can no longer live independently, are neglected by the health care system.

This speaks to a deeper problem embedded in the U.S., she said. Our society overwhelmingly favors independence and often rejects dependency. Many of us live in a world where we think we are independent because we can buy whatever products or services we need. But that isn’t true, she said. Even the able-bodied all rely on people and services.

“We delude ourselves into thinking we are independent. Our health care system also favors this approach. … It puts vast resources into keeping people alive and returning them to independence and few resources into teaching people how to die or live with a chronic condition,” she said, including the 1.7 million Americans who have a traumatic brain injury. “We have to give chronic care more serious thought … [and]do something about the fragmentation of our health care system,” Martone said.

‘I Am So Much More Than What You See’

Dealing with the health care system was difficult, but the hardest thing for her to experience as a mother was discrimination against her daughter, she said.

“There were so many places where we were made to feel unwanted. Her friends drifted away, and her world was reduced mostly to her immediate family and her paid caregivers and therapists,” said Martone.

Martone showed the audience a scene in the documentary “Your Health: A Sacred Matter,” aired on PBS, where her daughter sings about her desires in a song that she composed herself: “I am so much more than what you see. There is so much more inside of me. A sense of humor and gratitude for life. … You may think I’m less of a person, only because you see I can’t walk. But if you took the time, you would know I could talk. Could you stop a moment and say hi?”

Martone said we need to do more to accommodate persons with disabilities: “We need to stop viewing our work with them as acts of charity on our part and recognize our interdependence. They are not here to make us feel good about ourselves. They are us.”

Gaylin and Martone with Gage Krause, a Ph.D. student who moderated the Q&A