skip to main content
Return to Fordham University
You are at:Home»Colleges and Schools»Graduate School of Arts and Sciences»Exchange Program Gives South Africans a Glimpse of American Culture

The 2017 cohort of South African students and working professionals from Fordham’s exchange program with the University of Pretoria were reminded of home— albeit in the Bronx— with a recent Major League Soccer (MLS) game one rainy afternoon at Yankee Stadium.

Dressed in green-and-yellow South African jerseys, the group cheered on the New York City Football Club as it went head-to-head with the Seattle Sounders.

“In South Africa, everyone loves [soccer],” said Sharlotte Valoyl. “People play the vuvuzela, and if their team wins, they have a party or will go around campus singing.”

For Mmane Boikanyo, who works as a marketing manager for TuksSport, the University of Pretoria’s sports department, the outing, along with a previous visit to the NBA headquarters in New York earlier this month, allowed her to take notes on how sports are marketed in America. She hoped to use what she learned from those experiences to better promote her school’s sports department.

“Sports marketing in America is quite aggressive,” she said. “There are a lot of products, merchandise, and high investments in digital media. In South Africa, we haven’t caught on yet. We’re mainly focused on talent acquisition and operations.” 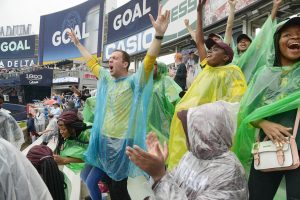 Though it poured during the soccer game, the South Africans didn’t let the rain deter them from having a good time. The group put on their ponchos, sat on the bleachers, and shouted excitedly with other soccer fans every time the ball came close to the goal post.

“This group of cohorts have so much energy,” said Booi Themeli, Ph.D., director of the exchange program. “When people come to a new country for the first time, they often feel overwhelmed, confused, or intimidated. But this group is so enthusiastic. They just dived right in.”

The five-week exchange program, a partnership between Fordham’s International Political Economy and Development (IPED) program and the University of Pretoria, gives South African students an opportunity to study at Fordham while Fordham students study at the University of Pretoria, and learn about emerging markets. This year’s New York group will visit private and government institutions such as the World Bank, Bank of America Merrill Lynch, ICBC, and Bloomberg. The group will take trips to notable attractions around the Tri-state area and nearby cities, like Boston and Washington, D.C., to further immerse themselves in American culture and business.

“I want to work for the World Bank or the U.N., so the visits to financial institutions have been helpful,” said Pieter Scribante, who is studying economics. “It has been interesting to see how people who studied economics and finance are applying what they learned in the real world, and using their degrees.” 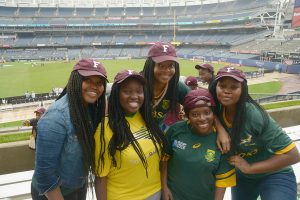 Mapule Mashapha, who is pursuing a masters in educational psychology back home, said taking courses in family counseling and theories of interpersonal trauma at Fordham is giving her an overview of what to expect as a counselor.

“A lot of what we do in South Africa is theoretical so there’s often no practical guidance of what to expect when you actually begin your career in counseling,” she said.

Basisipho Jack, a graduate from the Oprah Winfrey Leadership Academy for Girls in Johannesburg, South Africa, said the exchange program has helped her to build connections with other students and engage with the Fordham community. Fordham, like the leadership academy, is a very close-knit place.

“The academy was a sisterhood. We all knew each other’s background and got to know each other like family. Fordham feels like that kind of community.”

Ashley Daswa, the nephew of South Africa’s first Catholic martyr, Blessed Benedict Daswa, said the opportunity to study at a Jesuit institution like Fordham is allowing him to keep his late uncle’s vision alive. He said his uncle always encouraged him to “study hard and be a leader.” A welcome message from Joseph M. McShane, S.J., president of Fordham, was also source of inspiration.

“Father McShane told us that we come from a very great country, and that we are the future,” said Daswa, who works at an investment bank in Cape Town. “It makes you feel like you’re a person who is not only going to make a difference, but is also destined for greatness.”