Marc Canton, FCRH ’01, GBA ’08, freely admits he knew nothing about the Fordham Ramblers when a member of Fordham College at Rose Hill’s all-male a cappella student group asked him to be their adviser.

“You know how different groups and different organizations tend to draw similar souls? This group, it’s amazing how the players change, but the team doesn’t. They’re always a pretty energetic group, a lot of fun; very lighthearted, passionate, caring kids,” he said.

Canton, who is director of intercampus transportation for the University, said he dabbled in music growing up but never stuck with it. As an undergraduate, he didn’t join any student clubs, so now he prods undergraduates to discover all the opportunities at their disposal.
“I was only two years removed from graduating here in 2002, and yet I had no idea the Ramblers existed. That’s a problem, and I didn’t want other students to make that same mistake,” he said.

Canton’s story is not uncommon. Every one of the 80 student clubs at Fordham’s Rose Hill campus and 44 at the Lincoln Center campus—be they academic, social, or service-oriented—has a faculty or administrative adviser. Often the person is a faculty member whose expertise mirrors the club. But sometimes, as with Canton’s case, the connection is not so obvious. 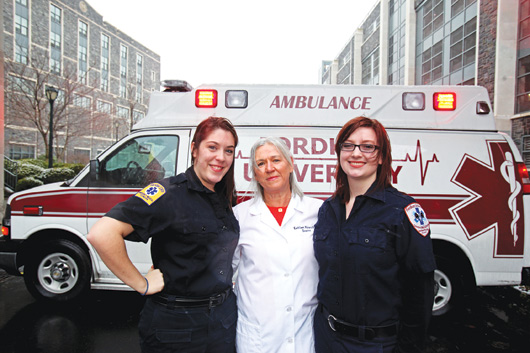 What all have in common is a willingness to freely give valuable time.

Kathleen Malara, executive director of University Health Services, for instance, is also adviser to the F.U.E.M.S., which runs two ambulances on the Rose Hill campus. When Malara started at Fordham 12 years ago, she advocated for the group to be brought under her supervision, which it was three years later. She and assistant director Deborah Mosko take turns every two weeks being on call 24 hours a day, to assist F.U.E.M.S with providing continuity of care and followup for students transported.

Students receive E.M.S. training elsewhere, but Malara helps address bureaucratic issues that arise within the University, like a request for an elevator key in a residence hall.
“In many ways I’m their sounding board. They’re an incredible group of students,” she said. “They’re doing this without stipends, while they carry a whole load of academic responsibilities.”

Research is a major component of the Psychology Society; it holds a research fair in September where faculty members solicit student volunteers to help in their research.

“That had always happened, but in kind of a haphazard way; a student would have a professor in class and they’d say ‘Hey, do you need any volunteers on your research,’” he said. “[Now] students [can]find out what’s really in their area of interest, instead of who’s the faculty member they feel the most comfortable about knocking on their door.”

At the Lincoln Center campus, Vincent DeCola, S.J., assistant dean for first-year students, serves as adviser for both Desi C.H.A.I., which promotes South Asian culture, and the Rainbow Alliance, which advocates for the gay and lesbian community. Like Canton, Father DeCola came to be involved with the groups because he knew students who were already members. Much of his job, he says, is overseeing budget requests, “but I also try to attend some Rainbow meetings and events,” he said.

“I also try to stop by the major Desi C.H.A.I. events, which usually include cultural dances and music and ethnic dishes, all of which I enjoy.”

When it comes to pairing up clubs with professors, the previous examples illustrate how it normally happens, said Jennifer Lackie, assistant director of student organizations and programming at Rose Hill. The Office of Student Leadership & Community Development maintains a list of faculty members who are interested in community activities. Being a club adviser is one of those.

“Sometimes we make pairings from there, or I [might]know a faculty member who’s interested in taking on more clubs and I can pair people as needed. But for the most part, our students are very excited about finding their own club adviser. They really go above and beyond to find someone who meets their needs,” she said.

“[Advisers] can challenge students to think about new ways to approach their organization. I hope they can have conversations with their students about events that their club is hosting, and how those events fit in with the mission of both their organization and the University as a whole,” she said.

Rosenfeld, who is on leave this semester but will resume advising when he returns, said the Fordham faculty is especially generous with its time.

“I hear a lot of my colleagues at other universities gripe that when something is needed, nobody’s hand goes up. When the chair here says I need help with X, Y, or Z, you’ll get, like, five people putting their hands up,” he said.

“They’ve enriched my life, to be honest.”