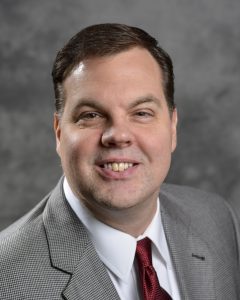 Jeff Neubauer, head coach at Eastern Kentucky University for the past ten years, was named head men’s basketball coach at Fordham University on March 30. Neubauer was introduced at a press conference on the Rose Hill campus on Tuesday, March 31.

“We are delighted to welcome Jeff Neubauer to the Fordham family,” said Joseph M. McShane, SJ, president of the University. “His ability to inspire superior performance on the court and in the classroom fits well with Fordham’s mission and our culture. Likewise his winning record at Eastern Kentucky will serve Fordham well. Most importantly, we believe Jeff will be a positive force for our student athletes, in their careers and in their lives.”

Over the past ten years, Neubauer led Eastern Kentucky to five 20-win seasons, including each of the past three years, and five trips to national postseason tournaments, including a berth in the 2014 NCAA Championships where the Colonels nearly upset second-seeded Kansas in the second round of the NCAA Tournament.

“We are absolutely thrilled that Jeff Neubauer has decided to become the next head men’s basketball coach at Fordham,” said Roach. “He has proven himself as one of the top up-and-coming coaches in the country and brings a tremendous amount of experience to our program. We are confident that Jeff can lead us to success in the Atlantic 10 Conference, one of the top basketball conferences in the nation.”

Neubauer’s 188 career wins at Eastern Kentucky is second only to Paul S. McBrayer’s 214 at the school and his overall mark as the Colonels’ leader is 188-134.

“I am thrilled to get the opportunity not only to be head coach at Fordham but to coach in New York City,” said Neubauer. “I really love challenges and am very aware of how competitive the Atlantic 10 Conference is and I’m looking forward to helping Fordham move forward in the conference.”

The past five seasons have been like none other at Eastern Kentucky. The Colonels’ 101 victories over that stretch are the most during any five-year period in school history. EKU won a school-record 25 games in 2012-13 and accumulated 70 victories over the past three seasons.

Despite being picked to finish third in the Ohio Valley Conference East Division this year, Neubauer guided the Colonels to a first place finish, earning the No. 2 seed in the OVC tournament. The Colonels finished the year 21-12, falling in the quarterfinals of the CollegeInsider.com Postseason Tournament (CIT) last week.

In 2013-2014, Neubauer led the Colonels to the Ohio Valley Conference title as Eastern won three games in three days at the tournament. The Colonels finished the season with a 24-10 mark and were second in the nation in turnover margin, fifth in three-point field goals per game and sixth in steals.

Following the 2013-2014 season, Neubauer was named one of 15 finalists for the 2014 Hugh Durham Award, presented annually to the nation’s top mid-major coach. He was also selected as the 2013 National Association of Basketball Coaches (NABC) District 19 Coach of the Year.

Neubauer’s 2012-13 EKU squad finished 25-10, setting the school record for wins in a season, and earned a spot in the CollegeInsider.com Postseason Tournament (CIT).  Eastern finished with three more wins than the previous program-best of 22, including the program’s first victory in a national postseason tournament game in 68 years.

The Colonels have been just as successful in the classroom under Neubauer.  In 2014, the program earned a coveted NCAA Division I Academic Progress Rate (APR) Public Recognition Award.  This specific award is given each year to teams that posted multiyear APRs in the top-10 percent of all squads in each sport.  The APR provides a real-time look at a team’s academic success each semester by tracking the academic progress of each student-athlete on scholarship.  Eastern Kentucky was one of only 40 men’s basketball teams from across the nation, and one of only two in the Commonwealth of Kentucky, to earn the Public Recognition Award.

In just Neubauer’s second season at the helm, the Colonels earned a berth in 2007 NCAA Tournament, winning the OVC title and finishing 21-12.  EKU won 11 of its final 13 games that season to earn the NCAA appearance.

Before arriving at Eastern Kentucky, Neubauer served three seasons as the top assistant at West Virginia under head coach John Beilein where he helped fuel the Mountaineers’ rapid rise to national prominence.

“This is a great hire for both Fordham University and the Atlantic 10,” Beilein said.  “Jeff Neubauer is one of the brightest coaches I have ever been associated with. His knowledge of the game, the players and the recruits, along with his versatile coaching style, make him a rising star in the game. He and his staff will have a lasting effect and positive impact on the future of Fordham basketball.”

The rebuilding process at West Virginia culminated in the Mountaineers’ dramatic run through the 2005 NCAA Tournament.  WVU earned triumphs over five top-20 programs in the regular season before reaching the Big East Tournament’s championship game and the NCAA Championship Elite Eight. West Virginia finished 2004-05 ranked 12th in the country.

Neubauer served under Beilein at the University of Richmond for five years before heading to West Virginia. The Spiders won 100 games during that time and earned a berth in the 1998 NCAA Championship.

Prior to Richmond, Neubauer served three seasons as a graduate assistant coach at The Citadel, where he also earned an MBA degree.

Neubauer is married to the former Karen Feret of Hackettstown, N.J.