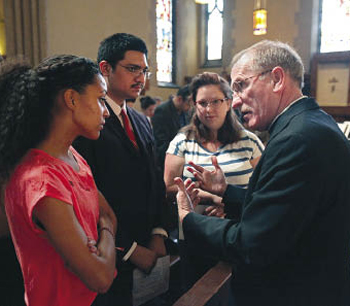 Joseph M. McShane, S.J., president of Fordham, speaks with junior Ashley Davis before the March 22 Call to Unity service. “We are a community that welcomes,” Father McShane said in his sermon.
Photo by Bruce Gilbert

This was no homily delivered at Sunday night Mass. Father Florio was speaking of the University’s response to several recent bias-related incidents on both the Rose Hill and Lincoln Center campuses in which racial and homophobic slurs were written in public spaces and, in one case, on the door of a student’s room in a residence hall.

The events have galvanized both students and administrators, who have banded together to present a united front against intolerance on campus.

While the events are largely seen as isolated incidents, the response from students has run the gamut, from outrage at finding that racism is prevalent, to shock that such a thing could happen at an urban, liberal arts college. Prayer vigils, town hall meetings, and public forums have been among the immediate responses—all efforts to bring people together and to encourage constructive dialogue. A Call to Unity services on both campuses, held March 21 and 22, brought out students, faculty and administrators, who signed a community pledge against hatred and bias.

Jeffrey Gray, senior vice president for student affairs, praised Fordham as an inclusive community “that celebrates all people and welcomes all people,” he said. “There is understandable concern on both campuses, concern over situations that are tearing the fabric of the community apart.”

Gray’s office co-sponsored A Call to Unity, and has been working with Fordham ACT (Activating Consciousness Together), a student group made up of young people responding constructively to issues of intolerance. 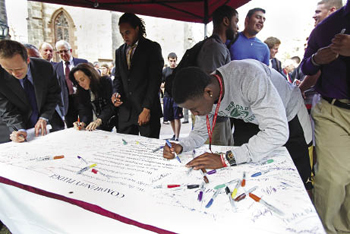 “We want to bring people together and make sure they stay together,” he said. “We are looking for common ground.”

Sofia Pertuz, assistant dean and director for the Office of Multicultural Affairs (OMA), seconded Gray’s thoughts about bringing students together. Her experience of working with students tells her that some have moved on from February’s events, while others—particularly students of color who might already feel a tenuous sense
of belonging when they see more students on campus who don’t look like them than do—continue to struggle with recent events.

“I’m sad that this had to happen, but it’s brought so much good,” said Pertuz, who noted that the ongoing conversations might not have come about had it not been for the incidents.

OMA is a co-sponsor of a much-anticipated Sustained Dialogue event, “Turning Away From Hate,” on April 18 and 19, an evening with T.J. Leyden, a former skinhead who now speaks on college campuses about turning away from hate. OMA booked Leyden following the graffiti incidents.

“He just captures the audience,” said Pertuz, who anticipates the evening will generate even more discussion.

Some of the suggestions she’s hearing from students about how to move forward are things that the University is already doing, Pertuz noted. These include offering more tailored training for student leaders on how to constructively engage with peers of differing backgrounds, races, and sexual identities. OMA trains residence hall directors, resident assistants, orientation leaders, and commuter assistants, and does student affairs professional development, among its many responsibilities. All of their training emphasizes social justice, self-reflection, and the development of skills to engage in cross-cultural exchange.

Resident Assistant Ojala Naeem, a senior majoring in international studies, had a good recollection of the training she received for each of her two years as an RA.

“It was two weeks of pretty intensive training in diversity, of being aware of different cultures, and of prejudices and how to deal with them,” she said.

Naeem has been active in the student response these last two months, speaking at the Rally for Solidarity in Lowenstein Plaza and attending town hall meetings. There, she said, students and professors engaged in a candid manner, with professors asking how they could incorporate these conversations into their classrooms.

“We would really like to continue the conversation with faculty,” said junior Alexa Rodriguez, vice president of operations for the United Student Government (USG). The USG has been actively working both on the student club level and as a liaison to the university administration. Rodriguez hopes to see more discussions on race and diversity taking place in Fordham classes next year.

While the rallies and vigils have been heartening, the administration and many students are committed to seeing that the University community’s response doesn’t get lost in the tide of final exams and summer break, only to be forgotten when the new school year starts.

Keith Eldredge, dean of students for the Lincoln Center campus, was thoughtful when reflecting on the meaning of these recent events. “I wouldn’t say this is evidence of a terrible culture” at Fordham, he said. “It has shone a spotlight on an issue that exists everywhere.”

“The question that must be asked is ‘Are we moving in the right direction?’” In his opinion they are. He and his fellow administrators are committed to empowering students to make long-lasting, sustainable change, even though they understand that that kind of change doesn’t happen overnight. “How can we impact students to make change in the world when they leave Fordham?”

Father Florio sees the opportunity to continue educating students—from their first moments on campus during orientation to their graduation—in the Ignatian ideals that anchor Fordham.

“All are welcome, respected, and valued on our campuses,” he said, “No matter their religious, cultural, or racial background. It’s Christian, it’s Catholic, It’s Jesuit. It’s human.”

And Naeem, who is graduating in May, remains hopeful that the Fordham community will continue to move forward, even though she won’t be here to see it.

“It’s unfortunate that it’s incidents like this that make us come face to face with questions of justice and fairness, racism and prejudice,” she said.

But she said she knows and trusts the caliber of the Fordham community that has educated and supported her these four years. “It all will lead to a positive outcome.”