skip to main content
Return to Fordham University
You are at:Home»Business and Economics»Rick Rieder Forecasts Heightened Market Volatility in Fixed Income for 2015

A finance veteran, Rieder is the managing director and Chief Investment Officer of fundamental portfolios at BlackRock, as well as a member of the Federal Reserve Bank of New York’s Investment Advisory Committee on Financial Markets and a recent inductee into the Fixed Income Analysts Society Hall of Fame.

The market will be much more volatile in 2015, Rider predicted in his Feb. 3 talk to an audience of faculty, staff, students, alumni, and friends.

One factor spurring this volatility is demographics, he said. 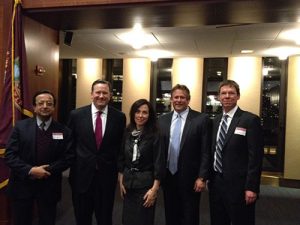 “We’re going through a demographic evolution like nothing we’ve ever seen before—the population is aging faster than it ever has,” said Rieder. “This means that the global economy is growing slower than it ever has historically, because when more people draw from the economy than contribute to it, you break the potential growth in the system.”

Another factor that Rieder linked to increased market volatility was technology, which he said is a major yet “grossly underappreciated” dynamic. Increasingly sophisticated technology has led to decreased cost of production, reduced cost of labor, and deflated prices overall.

“I’m an avid believer that technology is changing the ecosystem today. I don’t think central banks, markets, or even investors appreciate just how big the effect of technology is,” he said.

He offered the iPhone as an example of how drastically a new technology can influence a market. A single $650 phone has displaced $2,200 in collective worth of other products, such as cameras, camcorders, calculators, and even flashlights.

“Two-thirds of the products in this system were extinguished all because we have this item we carry around in our pockets,” he said. “And it not only replaces them, but also does the job better.”