skip to main content
Return to Fordham University
You are at:Home»Business and Economics»New Economics Course Shifts Focus to Sustainability and the Greater Good

Last September, after six months of a raging pandemic with no end in sight, unemployment had nearly doubled to an estimated 12.6 million Americans. The daily death toll had reached 1,000. Yet in that same month, the Sept. 2 Dow Jones S&P closed at a record high 3,580 points.

According to Anthony Annett, Ph.D., a climate change and sustainable development adviser at Columbia University’s Earth Institute, that kind of paradox is just one sign that the way we think about the economy is broken. 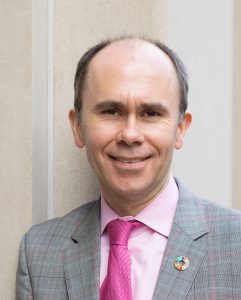 This spring, he’s teamed up with lauded economist Jeffrey Sachs, Ph.D., University Professor and director of the Center for Sustainable Development at Columbia, to address the problem in a new course.

At the invitation of Gabelli School of Business professor Michael Pirson, Ph.D., Annett and Sachs are teaching Modern Economics for a Sustainable and Inclusive Planet to a select group of Fordham students. The course, which is open to all undergraduate honors students, focuses on perspectives in economics that promote well-being for all on a healthy planet. Annett said the idea is to learn the philosophical, religious, and modern scientific basis of sustainable development.

It’s part of a larger rethinking of core curriculum at Jesuit business schools that is anchored in principles of Catholic social teaching and humanistic values, he said, noting that theories such as Homo Economicus and Rational-Economic Man that have influenced past generations of economists are being retired.

Having worked as a speechwriter for two managing directors of the International Monetary Fund, Annett had a front-row seat to the ways those ideas foundered, most spectacularly during the Great Recession of 2008.

“I changed tracks after the global economic crisis when I realized this was a crisis of ethics as much as a technical crisis of finance and economics. I started to get much more interested in Catholic social teaching and some of the alternative paradigms out there,” he said.

He and Sachs, a co-recipient of the 2015 Blue Planet Prize for environmental leadership who has twice made Time magazine’s list of 100 most influential world leaders, are publishing a textbook based on the class. It was planned in 2020, but the pandemic has made it feel particularly prescient. The notion that markets will self-correct is not accurate, Annett said, and it isn’t even the first time this has happened.

“After the Great Depression, people realized that laissez-faire economics did not necessarily work in the sense of being self-correcting. You can have dislocations that can last a long time and really hurt people, and that means you need the active intervention of government,” he said.

“We put a lot of emphasis on the role of government. What should government do, what are theories of government from various different thinkers? We pretty much reject the idea of libertarianism, which has influenced how economics has been developed over the past century or so, this idea that the government just needs to step aside and let the market work its magic.”

One of the course’s required readings is Annett’s Cathonomics: How the Catholic Tradition Can Create a More Just Economy, which will be published by Georgetown Press this fall. Annett joked that he’s cited teachings from Pope Francis—who addressed the topic in Let Us Dream: The Path to a Better Future, (Simon & Schuster, 2020)—so often, that he’s practically a guest speaker. 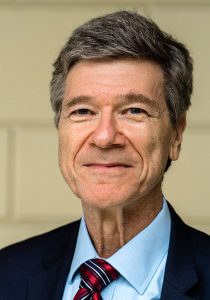 Sachs also said the pope’s encyclicals Laudato Si’ and Fratelli Tutti, which focus on sustainability and global ethics, are on his mind as he transcribes his lectures for the textbook.

“We need a new way to teach economics that addresses the core economic challenge facing society: achieving a prosperous, fair, and sustainable world economy,” said Sachs, who is the former director of Columbia’s Earth Institute.

“I’m learning an enormous amount every week, often by reading old texts that I had never read before or considering historical analogies that are relevant for our time. I’m also learning that we really can—and should—present economic issues in a new way.”

Alexios Avgerinos, a senior at Fordham College at Lincoln Center, said the class was exactly what he was looking for when he moved from Berlin to New York to attend college. He’s writing a thesis on how to structure a firm so that’s it’s not just a profit-maximizing vehicle and will be interning after graduation at a consulting firm dedicated to sustainability. With dual majors in economics and philosophy, he was intrigued by an economics course that featured Aristotle in its syllabus.

“I believe that firms hold so much power these days. Economically speaking, they’re larger than governments, so I think they can have the biggest impact to improve well-being for all people in the world.”

“When you open the Principles of Economics textbook, you are presented with all of these concepts such as utility maximization, and there are so many underlying philosophical assumptions there. You would think they don’t really matter, but they actually change the outcome in the real world.”

“In microeconomics, the standard assumption has always been that your goal, as a rational economic agent, is to maximize your preferences, which means you need to get as much stuff on the market that you like, based on your own tastes and preferences,” he said.

“We’re saying, “That’s not really in accord with what a good human being is all about. It should be about making economic choices that are good for you as a human being and good for human society as a whole.”