For Ken Langone, a billionaire whose vision helped create one of America’s most iconic big-box businesses, investing wisely isn’t about the money.

“I have a simple philosophy for investing: It’s all about the people,” the 79-year-old Langone told a standing-room-only crowd at Fordham University on Oct. 27. “A great person doing a great job will be a great investment.”

That was just one of the lessons of a lifetime spent building businesses that Langone, a co-founder of the Home Depot home improvement chain, sought to deliver to the approximately 400 people who gathered at the Rose Hill campus to hear from a man who said he wanted to “tell it like I see it.”

Langone — joined on stage by Donna Rapaccioli, Ph.D., dean of Fordham’s graduate and undergraduate schools of business, and Gabelli School senior Lou Murphy — delivered his gospel of people, passion and persistence, but he admitted that, despite his wealth and fame, not everything he touched turned to gold.

“Home Depot is one of my successes,” he told the audience. “But if you gave me six months I couldn’t list all my failures.”

Langone, who early in his career dug ditches for the Long Island Expressway, has been playing the big leagues of high finance and business for decades. He served previously as a director of the New York Stock Exchange, and he worked with Texas entrepreneur Ross Perot and his company, Electronic Data Systems. 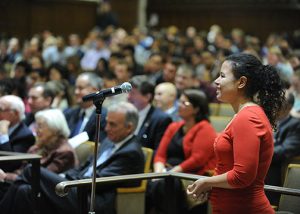 In the 1970s, Langone founded a boutique investment bank, Invemed Associates, which was designed to finance medical business startups. But he soon turned his interests toward home improvement, co-founding Home Depot with two others in 1978.

Home Depot’s orange signage has since become ubiquitous throughout the country. Langone donated some of the money he made to charities, including the NYU Langone Medical Center in New York City.

In his opening remarks, Joseph M. McShane, S.J., president of Fordham, called Langone “one of the leading lights of the American financial scene.”

Langone was not shy about pointing out what he said was a “poisonous and destructive” regulatory environment under the Obama Administration that was stunting business growth in America.

“We’re going to pay a terrible price if we don’t fix it,” Langone said.

“Tax me all you want,” he continued. “Just open things up so there can be opportunities for creative people to start businesses and be who they want.”

Langone also had practical business and life advice for the students in the audience:

On launching a business: “We had challenges but we kept the focus on what it should be: the customer.”

On employees: ‘I’m a believer in attitude, enthusiasm, passion, and humility. In business, I’d rather have a well-rounded worker with curiosity.”

On education: “Study everything in college you’ll never get a chance to study again. I look back and wish I was a history major.”

On integrity: “When you lose your integrity and your belief in yourself, you’ve lost everything.”

On the future: “You have opportunities in this country beyond your wildest beliefs. Our greatest days as a nation and a society are ahead of us.”

Langone’s appearance at Fordham, sponsored by the Gabelli School of Business, was a President’s Council lecture.