skip to main content
Return to Fordham University
You are at:Home»Business and Economics»Gender Bias in Business No Match for Gabelli School Women

To the world beyond Fordham, a female president-elect of the popular Alternative Investments Club and a thriving women’s investment group might signify welcome progress for the business world.

To the women of the Gabelli School, though, it’s business as usual.

“The environment is open here,” said Rosa Romeo, a clinical assistant professor of accounting and taxation, who is the faculty moderator of Fordham’s chapter of Smart Woman Securities (SWS).

“There’s a tone at the top that as long as you do the work and you get the grades, you can accomplish what you want. There is no ‘you can’t do this because you’re a girl’ sentiment. You want this role—go for it. You want this internship—go for it.” 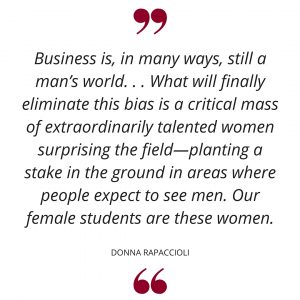 One needn’t look further than SWS to see this attitude in play, Romeo said. A nonprofit organization with chapters on 21 campuses around the country, SWS focuses on investment education for undergraduate women. The Gabelli School’s chapter is among the oldest—Fordham and Yale, which launched in January 2009, were the third and fourth colleges to form chapters following Harvard, where SWS originated, and Columbia.

“SWS is definitely shaping my experience at Fordham,” said Lauren Kelly, a sophomore finance major who joined SWS during her freshman year. “It’s about mentorship, building networks, and educating others. Basically, it’s an environment of women helping women.”

With more than 50 active members, SWS is one of the largest clubs on campus. Each new recruit is paired with an upperclassman member, who serves as a mentor in anything from club activities to classes to internships to interviewing.

“We encourage people to go for coffee with their mentors, to not be afraid to ask questions,” said Erika Schwartz, a junior accounting major and the chief operating officer of Fordham SWS. “The business world is competitive, so we emphasize supportiveness and being there for one another.”

Throughout the year, the group offers numerous educational seminars for its attendees, covering themes from résumé building to investment minutiae. Their cornerstone activity is an investment project, in which the students learn to research and analyze stocks and present their recommendations to a panel of judges.

In December, a group that included Elizabeth Fonger, a junior at Fordham College Rose Hill, Lorem Basile, a sophomore at the Gabelli School, and Kelly took their stock skills to Boston for the national SWS stock pitching competition. The group pitched Lululemon, and came in second place, behind Harvard. 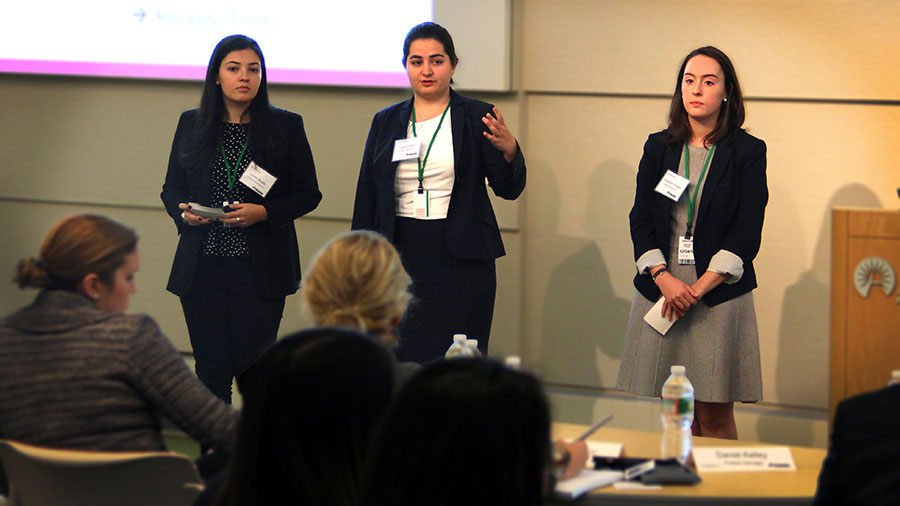 “I think I’ve gotten a lot opportunities [from SWS]and have been the beneficiary of good mentorship. And I’ve been able to then pass that on to younger members,” Kelly said.

As chief development officer for SWS, Kelly recruits speakers for the group’s annual Women in Leadership Conference, which takes place this year on April 8. In past years, the group has hosted speakers such as Barbara Desoer, CEO of Citibank, N.A., and Andrea Jung, former CEO of Avon Products, as well as Fordham alumnae MaryAnne Gilmartin, FCRH ’86, president and CEO of Forest City Ratner, and Patricia David, GABELLI ’81, global head of diversity for J.P. Morgan Chase.

“Someone asked her why she wanted to go into finance, and she said to us, ‘I just thought it was the coolest thing ever to be a woman on Wall Street.’ We all loved that!” Kelly said.

“[SWS] isn’t only about education and building a network. It’s about smashing the perception that there aren’t women in senior-level positions in the business world.”

The 2016 Women in Leadership Conference will feature Cathy Engelbert, CEO of Deloitte, LLP, and a GAMCO Women in Investing Panel, including head of institutional marketing and managing director, Regina Pitaro, FCRH ’76. For a full list, see the Fordham SWS page.
Then again, Gabelli School students don’t need much convincing, she said. Classes are “very much a meritocracy,” which translates to leadership roles, as well. Across the school, male and female students are equally represented in various leadership positions, from student organizations’ executive boards to the dean’s council.

“Business is, in many ways, still a man’s world. So, if you’re a woman, it is more important to project knowledge, to be curious and confident,” said Donna Rapaccioli, PhD, dean of the Gabelli School. “To this end, there are opportunities around every corner at the Gabelli School for women to learn and to take on leadership roles.”

The business world has come a long way in working toward gender equality, Rapaccioli said. Still, in many areas there remains a “subtle bias” both about women’s ability to fulfill high-level roles and their interest in pursuing such roles in these male-dominated, high-intensity environments.

“What will finally eliminate this bias is a critical mass of extraordinarily talented women surprising the field—planting a stake in the ground in areas where people expect to see men,” Rapaccioli said.

“Our female students are these women. They are making me extraordinarily proud now, and I cannot wait to see what they are accomplishing when they are 25, 35, or 50.”