skip to main content
Return to Fordham University
You are at:Home»Business and Economics»GBA Team Goes to London as Global CFA Finalist 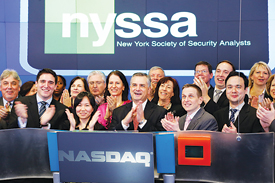 After beating out 18 other university teams to get to the “final four,” students from the Graduate School of Business Administration (GBA) won the New York Regional Final of the Chartered Financial Analyst (CFA) Institute Research Challenge. Ken Boswell, Paul Kearney, Jonathan LaSala, and Elaine Lou headed to London this month for the Global Final to compete against teams from the Asia-Pacific region, Europe, and North America.

The New York Society of Security Analysts hosted the regional competition at Bloomberg Headquarters on March 4. Competing against Montclair State, Pace, and Seton Hall universities, the GBA team boiled down complex data on Microsoft Corp. into a 10-page research brief and a buy/sell/hold recommendation.
Students put their GBA skills to the test in a forum where industry experts could evaluate their report and 10-minute slide presentation, and ask follow-up questions.

“It was a daunting process for our dedicated students; their social life has been pretty much nil,” said Robert J. Fuest, GBA ‘08, adjunct professor of finance in the Schools of Business and the team’s faculty adviser.

Team mentor Mike Kiernan, GBA ’93, joined Fuest in coaching the students, as did several other faculty and business professionals. The training began in earnest last August and the constant drilling was not unlike preparing for an athletic competition.

Students also read dozens of reports on Microsoft, banked 40 hours of interviews, and received more than 200 survey responses.
“A lot their understanding came from the surveys,” said Fuest. “I think their findings were valid.”