A team led by Amanda Allen (GBA ‘10) has been selected as the first place winner in the Traditional Track of the 2008-2009 Baruch College and Merrill Lynch Invitational Entrepreneurship Competition. The team won for Pandora’s Wish, a New York City-based online bridal registry. 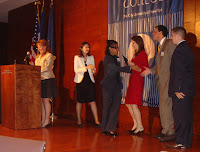 The award comes with a $10,000 prize, which Allen accepted on May 19. That award capped a grueling process that started in September with 102 submissions. Over three rounds, the entries were narrowed to three in each of the Traditional and Social Entrepreneurship tracks.

Allen conceived the idea for Pandora’s Wish during her own engagement, during which she discovered that stores with which she wished to register lacked online registries. After leaving her job as a federal bank examiner in January 2008, she enrolled at GBA with the express purpose of starting her own business. She continued to refine the idea throughout the course of her studies.

“There are four parts to this,” she says. “Brides create a wedding registry that reflects their style and personal taste; merchants gain an additional stream of revenue, access to an online marketing channel and a new set of customers; gift givers will have a more memorable impact on the bride with their unique gift; and (the business) is great for our local economy by keeping money local and supporting the city’s rich array of independent, brick-and-mortar retail and service providers.”

In addition to the first prize award, the judges have allocated $20,000 in seed money for the business. Allen said that she plans to launch the site in November.

This year’s Competition was the first in its 10-year history that was open to other schools than Baruch. In addition to Fordham, students from all the CUNY senior colleges, Columbia, Cooper Union, Manhattan College, NYIT, NYU, Pace, SVA and Yeshiva were invited to compete.