skip to main content
Return to Fordham University
You are at:Home»Business and Economics»Finance Chair Plumbs Data For Patterns in Banking, Currency Markets

In economics, it’s all about the data. 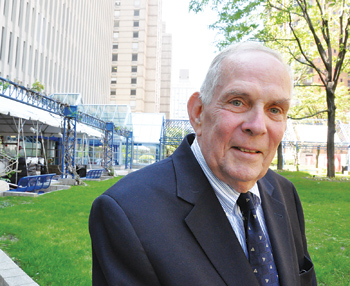 So when examining the long career of James R. Lothian, Ph.D., the Toppeta Family Chair in Global Financial Markets in the Fordham Schools of Business, it’s worth singling out one data point in particular: 793.

That’s the number of academic citations for “Real Exchange Rate Behavior: The Recent Float from the Perspective of the Past Two Centuries” (Journal of Political Economy, 1996).

That publication, which Lothian co-wrote with Mark P. Taylor, Ph.D., then a senior economist at the International Monetary Fund and now professor and dean of the Warwick University Business School, featured what was at the time the longest currently available exchange rate and price-level data set for the United States, the United Kingdom, and France—a data set that spanned 1791 to 1990.

It was lauded by economists for its breadth and depth, and as crucial to explaining currency exchange-rate cycles.

“When a currency moves away from equilibrium after it’s been stable for a long time, what’s [important]to observe is the entire episode from its move away to when it gets back,” he said.

“And if that takes six years, and you need about 30 observations to come up with an adequate empirical analysis, you can do the math: you need 180 years of data.”

In that study, Lothian and Taylor wanted to know whether purchasing power parity (PPP) establishes itself over long periods of time. The concept behind PPP is that the percentage change in the exchange rate should reflect the inflation differential between countries.

“[And] if the exchange rate is fixed and cannot change as is the case for New York and New Jersey, and for the countries of the Euro bloc, what we ought to see is that the rates of inflation become the same.”

Based on his extensive research, Lothian was named the inaugural holder of the Toppeta Family Chair in Global Financial Markets in the Gabelli School of Business last April.

In an installation ceremony on Nov. 19, Lothian, who joined the Fordham faculty in 1990, will share some of his most recent research into financial integration over history, another area of expertise.

Lothian’s research is very much situated in the present. For example, “Why Money Matters: A Fourth Natural Experiment” (Open Economics Review, 2011) compares the current economic downturn in the United States to the Great Depression in the 1930’s, the Japanese recession in the late 1980s and early 1990s, and the U.S. downturn of the late 1990s and early 2000s.

Unlike during the Great Depression, when there was a 33 percent decline in the stock of currency, the current recession was caused by a credit market freeze, not a banking panic.

The analysis is similar to what Nobel Prize-winning economist Milton Friedman used in a 2005 paper he wrote for the Journal of Economic Perspectives, said Lothian, who studied under Friedman at the University of Chicago, where he earned his doctorate in 1973.

A strict emphasis on data is one of the hallmarks of Friedman and the Chicago school of economics. At its most basic, the school is about applying classic economic theory—both price theory and monetary theory—to real-world problems.

“Economic development literature in the 1950s was to a large extent ad hoc nonsense,” he said. “Like the idea, ‘Well, those people in the tropics aren’t developed because they’re different than we are; they like to hang around under the palm trees. So we’ll have to have a government program to get them up and moving.’

“In addition to being incredibly patronizing, that theory doesn’t make any sense. Just because they come from south of the equator doesn’t necessarily make them different. One of my teachers at Chicago, the Nobelist Theodore W. Schultz, made that point forcefully. He and his colleagues Al Harberger and Larry Sjaastad revolutionized economic thinking about development.”

Lothian said he tries to bring that Chicago-school marriage of theory and empirics into the classroom.

Lothian is currently working on a paper that analyzes 420 years’ worth of data on the Dutch guilder to British pound sterling exchange rate and the price levels in the two countries. Another paper will compare currency data from 20 countries over time for three episodes —the 1880-1914 gold standard, the inter-war period, and post-World War II.

He takes great pride in having published papers that have been influential.

“I remember when George Stigler, another one of my teachers at the University of Chicago, won the Nobel Prize and a reporter came along and said ‘I see you’ve published 85 articles, Professor Stigler.’ The reporter then pointed out Stigler had a colleague who had published 620 [papers].

“And George says, ‘Yeah, but all mine are different,” he said.

Lothian points out that so are his. “My papers cover pretty much the whole gamut of international finance and money. And even where common themes appear, my analysis has different issues as its focal point and uses different data,” he said.