skip to main content
Return to Fordham University
You are at:Home»Business and Economics»Faculty Reads: Why Print is Not in Peril

From Guttenberg to Google, content is king. But the way content gets delivered has changed drastically over the last 20 years, thus upending the once-stable print publishing industry.

Al Greco, Ed.D., professor of marketing at the Gabelli School of Business and an expert on publishing, has taken an all-encompassing look at the subject in his new book, The Economics of the Publishing and Information Industries: The Search for Yield in a Disintermediated World (Routledge, 2015).

If the general perception is that of an industry in crisis, Greco said his pragmatic analysis should calm the nerves of print enthusiasts. His nuts and bolts research is based loosely on the Gabelli School’s undergraduate core curriculum spearheaded by Donna Rapaccioli, Ph.D., dean of the school.

“About five years ago, Dean Rapaccioli started a new undergraduate core where students look at a company from the accounting, management, marketing, strategy, and information technology angles,” said Greco. “What’s appealing about that approach is that everything counts. That’s the intellectual framework for this book.”

Greco said his book looks at publishing in all its multifaceted products, from newspapers to textbooks, from magazines to scholarly journals. It also looks at copyright law and tax regulation.

The book nods to Harvard economist Michael Porter and Columbia Business School’s Benjamin Graham, a former professor of Mario Gabelli and Warren Buffett, said Greco. He said that Buffett is a heavy investor in newspapers through his investment firm, Berkshire Hathaway.

“Berkshire Hathaway owns about a 120 regional and local newspapers,” said Greco. “So why are these very smart people investing when everyone is saying print is dead? Because of the content.”

Greco said that as a value investor Buffett understands the media market’s need for local content. He compared the publishing businesses to a castle and a moat: Content is the castle and intellectual copyright laws are the moat that protects content so it can be sold on the market, thus preserving value. Although newspaper content can be bit harder to protect online, Greco said that advertisers still seek out targeted local audiences.

And while the newspaper industry’s turmoil has gained most of the ink in the press, other sectors of the industry don’t face similar disruption, he said. For example, K-12 textbooks are years away from going digital. That built-in audience of 55 million students and 7 million teachers/administrators will remain reliant on print well into the foreseeable future. 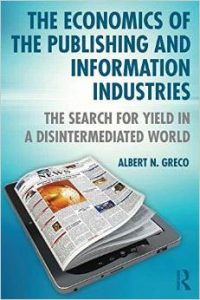 In higher education, where 95 percent of students use computers, print will remain firmly established through 2020. Even academic journals that have moved aggressively into digital, he said, maintain flagship print journals.

“When you have a digital journal, it’s a license. So there’s a concern about the preservation of scholarly information,” he said. “And that’s why Walsh Library isn’t going to disappear.”