skip to main content
Return to Fordham University
You are at:Home»Business and Economics»Capitalism is the Solution to Income Inequality, Says Gannon Lecturer

The expanding gap between the top earners and nearly every other socioeconomic group in the United States has put a spotlight on the fairness of free-market capitalism.

Nevertheless, the best chance the country has for resolving its worsening problem of income inequality is to embrace a fair and responsible free enterprise system, said this year’s Gannon lecturer on April 26.

In a recent New York Times opinion piece and again at Fordham, Peter A. Georgescu, chairman emeritus and former CEO of Young & Rubicam, stressed that income inequality in America has reached crisis level.

The quickest and most effective solution to the crisis is capitalism, Georgescu said in his talk, “Capitalists Arise! Income Inequality in America Today,” hosted by the Graduate School of Arts and Sciences.

“Free market capitalism has done amazing things for this country and for the world. … Hundreds of millions of people have been lifted out of poverty,” said Georgescu, a child survivor of a Romanian labor camp and no stranger to deprivation and hardship.

“It has made America a leading economic and military force in the world, and just after the Second World War through the mid-1970s, it built the greatest middle class and the greatest economic market the world had seen.” 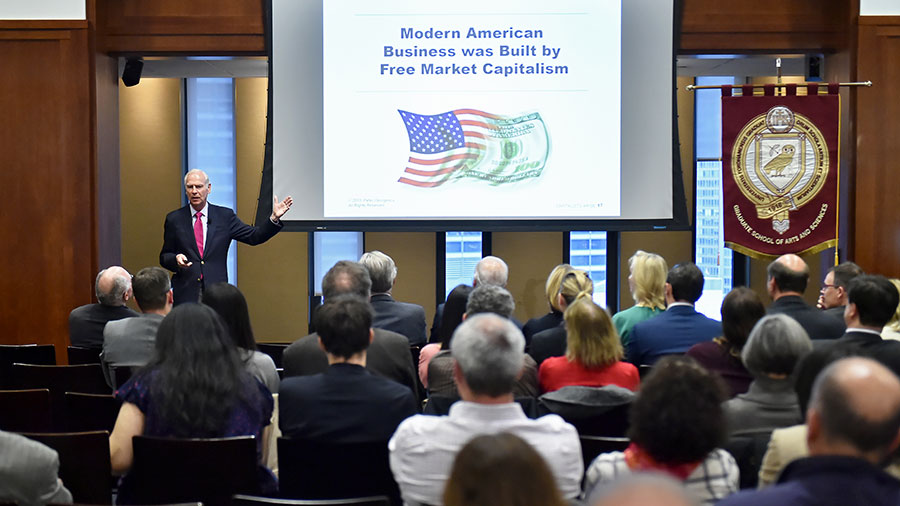 Free market capitalism, as it was originally imagined, revolves around five key stakeholders: customers; employees; company shareholders; the corporation itself; and the community in which the corporation does business. Georgescu offered as an example the Johnson & Johnson Credo, crafted in 1943 by former chairman Robert Wood Johnson, which Georgescu said epitomizes the priorities of capitalism.

The goal of business in a capitalist society is simple, he said—create jobs and pay fair wages, and do so while attending equally to these five constituencies.

However, this is not the capitalism that we know and operate within today, Georgescu said. Capitalism has gone awry due in part to thinkers such as Milton Freeman, who in 1980 stated that the “real purpose of business is to increase shareholder value.” Since then, corporate priority has shifted from five key stakeholders to just one, creating a system that Georgescu called “shareholder primacy.”

Research data support this trend, he said: Over the last 40 years, wages have flat-lined, while profits and shareholder returns have steadily increased. Currently, 90 percent of private corporations’ profits go to shareholders.

To further destabilize the system, the current ratio between CEO salaries and average employee wages is about 600 to 1, Georgescu said. CEOs, meanwhile, are beholden to shareholders’ demands, as they are constantly under the threat of “deliver or get fired”—a threat that is not remote, given that the average tenure of a CEO is under four years.

The solution is not, as some have suggested, a redistribution of wealth, whether through punitive taxation or social unrest (the latter of which would be more akin to a “redistribution of poverty,” he said). 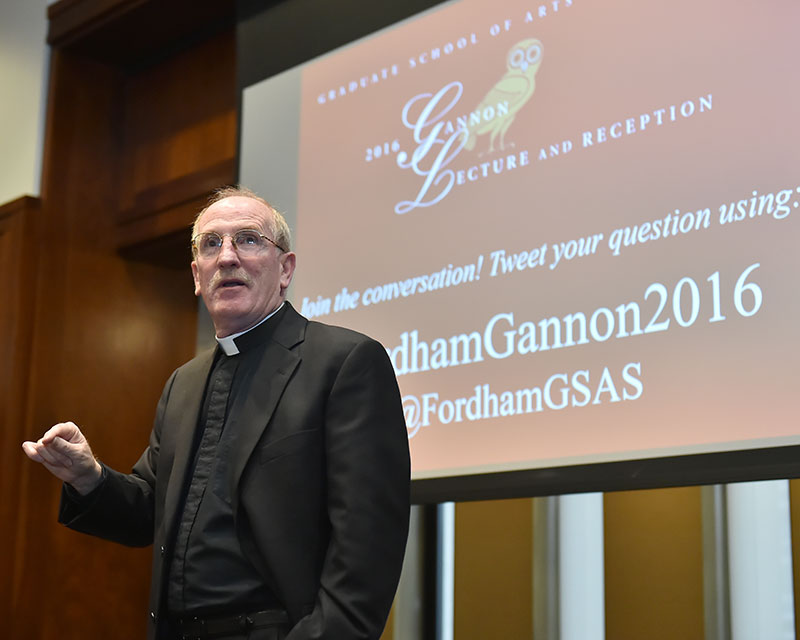 Rather, the solution is to end the culture of shareholder primacy and return to a model that prioritizes all five key stakeholders—especially employees.

“Who are the real value creators? Where do the ideas come from? The employees. So, the employees must get fair wages,” he said.

“Free enterprise can work. The profit motive is very effective. But the profits have to be channeled the right way. You have to share the pie. Let free enterprise create a bigger and bigger pie, but then make sure you share the bounty. … It has worked before and it can work again.”

Inaugurated in the fall of 1980, the Gannon lecture series brings distinguished speakers to Fordham to deliver open lectures on topics of public importance. The series is named for Robert I. Gannon, SJ, former president of Fordham.