skip to main content
Return to Fordham University
You are at:Home»Athletics»In NCAA Playoff, Soccer Coach and His Team Savor Each Victory 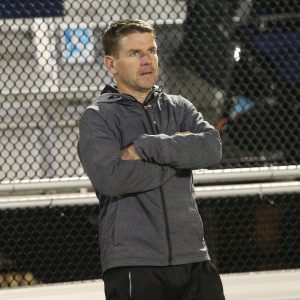 For the first time in Fordham history, the Division I men’s soccer team has reached the final eight of the NCAA national championship tournament. The Rams will advance to play the University of North Carolina on Saturday, Dec. 2.

At a Nov. 25 match against Duke at Durham, North Carolina, the Rams came from behind to tie and won in an overtime shootout. It was a game that was almost, if not as, exciting as the first-round Nov. 16 3-2 win against St. Francis Brooklyn at Fordham’s Jack Coffey Field, said Head Coach Jim McElderry.

““It was a lot a lot of fun for us to get the NCAA tournament here. People from all over the area came, students and professors came, and it was the best atmosphere,” he said. “Let’s face it, sports is about entertainment, and everyone who came out had a great night.”

With more than 15 years of coaching at Fordham, McElderry credits not just the student athletes and support staff for this year’s success, but also the teams from the 1980s and 90s. Not only did they lay a solid foundation for the program, but they continue to follow and support today’s players.

“Much of our support starts with alumni who tap into their own good experiences here,” he said.

The program has long since incorporated contemporary recruiting methods, and McElderry said he spends a significant amount of his time getting players with both talent and “good personalities.”

“When I first started here, there was some down time for the program within the changing landscape of college soccer,” he said. “We had to adjust to it in terms of scholarships and staff.”

He noted that, like most areas of the University, facilities and staff remain key to attracting top talent to the soccer program. The University’s high-ranking academics remain a key recruiting tool as well.

“It’s important for them to branch out in all areas, all departments,” he said. “That’s part of our recruiting spiel: ‘Here you are in the greatest city in the world, by the end of four years we want to have put you in the positon you want to be in, in life.’”

In some cases, that may mean advancing to pro soccer; in other cases to Wall Street, he said.

“There’s been a big push with the major league in the states, and we haveMajor League Soccer keeping track of our players,” he said. “But we ask the players, ‘What do you want to do? Because you cannot do it halfway.’ We have some players whose dream is to go to med school and others who want to get out and work right away.”

But for now, the team and their coach are savoring the moment—especially the seniors.

“Every time we win it extends our season another week. That’s more time we get to be together as a team,” he said.