skip to main content
Return to Fordham University
You are at:Home»Athletics»Rams Rout Crusaders at Yankee Stadium
Photos by Chris Taggart
They came from Bellingham, Washington and Dallas, Texas; from the suburbs of Boston and downtown Chicago. Among them were African-American sorority sisters, philanthropists, fellow athletes, social workers, lawyers, veterans, and more than a few Irish families. 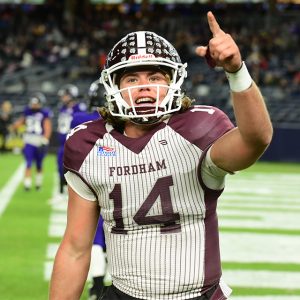 More than 21,000 descended on Yankee Stadium in the Bronx on Nov. 12 to cheer on their teams from Holy Cross and Fordham, as they fought for the Ram-Crusader Cup. The Rams made the most of their once-in-lifetime chance to play at the world famous venue, taking the cup after defeating the Crusaders, 54-14.

Joseph M. McShane, S.J., president of Fordham, called the Ram-Crusader competition a “friendly rivalry,” and fans taking the subway to the stadium proved him right. On the uptown No. 4 train, groups of purple-clad Crusaders jovially jousted with maroon-clad Rams, as Bronx locals characteristically paid little attention to the commotion.

Father McShane said the last time Fordham Rams played Yankee Stadium was in 1946—and they lost. However, the team had won previously at the stadium during the University’s centennial year in 1941.

“And for us to be going at it with Holy Cross, a Jesuit sister school, is just great,” he said. 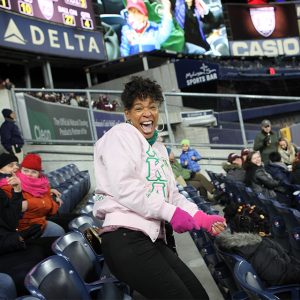 Philip Borough, S.J., president of Holy Cross, agreed. “Yankee Stadium! Every little boy and girl in America dreams of being here,” he said.

The two school presidents met before the game in the Steinbrenner Suite. Father McShane noted that Holy Cross would be celebrating its 175th anniversary in two years, and proposed a rematch at the stadium in two years’ time. Father Borough said that with nearly 10,000 tickets sold to Holy Cross fans “that might be a good point.”

At a pregame celebration of nearly 300 Fordham alumni, unofficial reunions took place among small groups, over plates of hot dogs and hamburgers. Brian Quinn, FCRH ’01, who traveled from Dallas with his family, recalled his years on the football team, which he admitted “weren’t very good.” As he surveyed the stadium he joked, “This is a big upgrade since then.”

Nearby, Maureen Bateman, LAW ’68, and Warren Gregory, FCRH ’66, talked about the ties that bind Fordham’s schools. 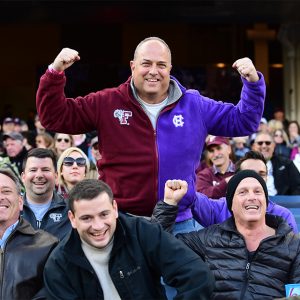 “It comes from the philosophy classes,” Bateman said, adding that her son Daniel who majored in physics at Fordham College at Lincoln Center “still has the Fordham spirit.”

“It is Jesuit, and their philosophy is serving others,” said Gregory.

The Jesuit philosophy was on display in the stadium as well. Colleagues of Sheena De Loache, a student at the Graduate School of Social Service, donated their tickets so that she could take a group special needs adults to the game.

“They had a blast of a time,” De Loache said.

Elsewhere in the stands, John Hanley, LAW ’00, wore a jersey half purple and half maroon, with logos of both teams. His son John graduated from Holy Cross last spring and his son Thomas is a sophomore at the Gabelli School of Business. But as a Fordham alumnus, he wore maroon socks to “tip the balance a little bit.”

But in the end, it was about more than the game.

“To see these young men to play at Yankee Stadium is a big deal,” said Bob Daleo, chairman of Fordham’s board of trustees. “We’ve had players go on to the NFL, but most of these kids are here for an education that will change their lives. This experience is just icing on the cake.”