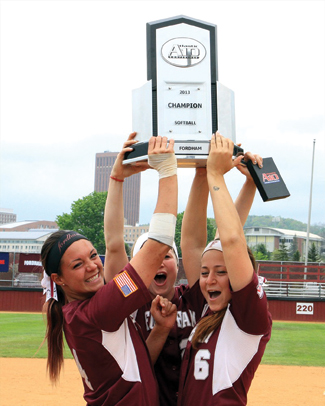 For the second time in three years, Fordham’s Softball team was named A-10 Champions following a stellar season. The team also registered its third NCAA Regional appearance in the past four years.

The Rams’ season came to an end when Fordham fell to Arkansas, 5-2, in game five of the Norman Regional on May 18.
In spite of their NCAA regional loss against Arkansas, the Fordham Rams, also the A-10 champions in 2011, raked in quite a few individual honors. Four players earned First Team NFCA Division I All-Region, as Michele Daubman, GSB ’15, Elise Fortier, FCRH ‘14, Gabby Luety, FCRH ’14 and Jamie LaBovick, GSB ’13 were recognized as some of the premier players in the Mid-Atlantic Region.

Fordham’s four First Team All-Region selections tie for the second most in school history, as the 2010 Rams garnered five First Team nods and the 2007 squad earned four spots on the All-Region Squad. All four of these players also garnered recognition from the Atlantic 10, as LaBovick made First Team All-Conference, Fortier and Luety earned Second Team and Daubman was named to the Academic All-Conference Team.