skip to main content
Return to Fordham University
You are at:Home»Arts and Culture»WFUV Honors Leaders in Music, Broadcasting, and Philanthropy at Annual Gala 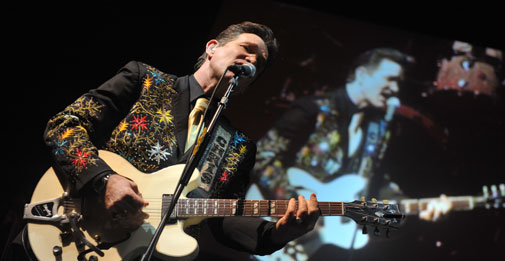 WFUV (90.7 FM), Fordham’s listener-sponsored radio station, brought the right music to its biggest fans on May 10, raising just under $500,000 at its fifth annual gala dinner and concert at New York City’s Gotham Hall.

That sum is likely to climb as an online auction of specialized gifts, including personalized concert packages and meet-the-artist opportunities, continues until May 23 athttp://www.charitybuzz.com/search?keywords=wfuv

Money from the annual gala supports WFUV’s capital needs, including facilities and technology at the non-commercial, innovative music station that boasts a listener-base of more than 300,000 weekly, and which has been the training ground for many outstanding careers in broadcasting and communications.

“We come together to celebrate the legacy and the promise of WFUV, on the 65th anniversary of its formation,” said Joseph M. McShane, S.J., president of Fordham. Father McShane said that the Jesuits were enthusiastic about having a radio station back in 1947, but that the FCC “wasn’t crazy” about Father Robert Gannon’s choice of WRAM as the perfect call letters; thus, WFUV was born.

“Today we celebrate the role it has played as seminary for extraordinary talent,” he continued. “We have a virtual lock on sports broadcasting in New York . . . and we are probably the most interesting radio station of all the FM stations in the United States.”

The station honored three giants in the music and sports and news broadcasting worlds.

Receiving WFUV’s Artist of the Year award was Grammy-nominated singer-songwriter Chris Isaak, whose song “Wicked Game” catapulted to the nationwide Top Ten after being featured prominently in David Lynch’s 1990 film, Wild at Heart. His latest album, Beyond the Sun, is a tribute to Sun Studios, and one he’s always wanted to make since listening to his parents’ 45s during his childhood in Stockton, Calif.

Christiane Amanpour, global affairs anchor for ABC News, and recipient of nine Emmy awards, received the Charles Osgood Lifetime Achievement Award for Broadcast Journalism. Amanpour’s on-the-ground reporting from global conflict zones has solidified her reputation as one of the most honored broadcast journalists.

Osgood, FCRH ’54, recalled an encounter with Amanpour some 20 years ago when she was a young reporter asking for advice: “I seem to remember telling her it might be a good idea for her to change her name—but she wisely did not follow my advice. I am so proud tonight that her names appears on this award, along with my own,” he said.

Amanpour dedicated her award to three news colleagues who lost their lives this year bravely seeking to “tell the truth” of the Syrian conflict: Anthony Shaddid, Marie Colvin and Remi Ochlik.

Al Michaels said he grew up in Brooklyn listening to the sports voices of Red Barber and Vin Scully, who he called his “constant radio companion and role model.”

“Now I kid him that I’ll retire before he does,” Michaels said in accepting the Vin Scully award. “I hope he goes on forever.”

The inaugural WFUV Community Service Award went to Michael Dorf, founder of City Winery. Dorf was recognized for donating 15 percent of his wine sales to numerous nonprofit and cultural organizations, and raising more than $700,000 in funds for music education for underserved youth.

WFUV colleagues paid a special tribute to Pete Fornatale, FCRH ’67, who died on April 26 following a cerebral hemorrhage. Fornatale got his start at WFUV in 1964, while a Fordham student, and was the host of the station’s Mixed Bag for the last 11 years.

To round out presentations and tributes, Isaak and his band played an hour-long set, rocking the hall with songs from his new album as well as his biggest hits. Clad in a suit patchworked with jewels, Isaak proved himself every bit a consummate live entertainer, sauntering into the crowd, hamming among adoring guests, and emoting the haunting, crooning, rocking vocals that are his signature.

But in the end, the evening was about raising funds for the non-commercial, listener-supported station. The event live-auctioned 2 front row tickets and backstage passes to a Bonnie Raitt concert ($5,500); private party entertainment from celebrity DJs Rita Houston and Corny O’Connell ($3,500), and a three-week internship for one lucky student at Bloomberg ($5,500), among others.