skip to main content
Return to Fordham University
You are at:Home»Arts and Culture»Students Celebrate Lunar New Year with Weeklong Festivities

Firework shows, street parades, and big family meals—that’s what a typical Lunar New Year looks like. But like everything else, COVID has affected the biggest holiday of the year for many people of Asian descent.

Friday, Feb. 12, marked the beginning of this Lunar New Year, and while large gatherings were not possible, Fordham’s Asian American & Pacific Islander (AAPI) Committee still wanted to host a special week of events for students to celebrate. The festivities included virtual and in-person events at both Rose Hill and Lincoln Center that took place all of last week, to usher in the incoming Year of the Ox.

“I really thought it was beneficial to celebrate Lunar New Year this way,” said Noreen Samantha Bautista, FCRH ’21, AAPI’s cultural programming coordinator. “Having programming for the whole week I felt did the holiday justice.”

Kenneth Tang, FCLC ’25, member of the Fordham AAPI committee at Lincoln Center, said AAPI had seven events planned out beginning on Monday of last week. The events included a virtual trivia night, tabling on campus where students could pick up traditional red envelopes and chocolate coins, a virtual viewing of the Netflix film Over the Moon, and a build-your-own ox and lantern event at Rose Hill.

Bautista said she was pleased to see non-AAPI students interested in learning more about the Lunar New Year celebrations during the tabling event at Rose Hill.

“I even overheard one conversation,” she recounted. “They were like, ‘Oh, I got a red envelope,’ and then they asked me what it was. And then I told them, ‘You give it to your loved one, and usually put money in it.’ And they were like, ‘Oh, I’m going to do that right now.’ So it was cool to see things expanding and spreading cross-culturally.”

Though celebrations were toned down, one positive from this year was the cross-collaboration between campuses. The Rose Hill and Lincoln Center AAPI committees usually function independently of each other, said Gabrielle Abrazaldo, FCLC ’23, AAPI’s programming liaison. But this year’s planning was a true joint effort.

“It came to that point where I think that the committee started to blur,” she said. “We didn’t know who was in which campus because we were all online at the same time. We just saw ourselves as one group, which was really nice.”

Every Asian country celebrates the Lunar New Year a little differently, and Bautista said she wanted to make sure everyone felt represented. “We wanted to make sure that all of the subcommittee members of AAPI had a voice because I know this was also a very intimate holiday, and everyone celebrated it their own way.”

Tang, whose family is of Chinese descent, said that his family usually has a big celebration. “Normally we just get as many family members as possible, and then gather around a big table to eat a really big dinner,” he said. “After the dinner, we usually just hand out red envelopes, and call it a night.”

While Lunar New Year isn’t typically celebrated amongst Filipino communities, Bautista and Abrazaldo both appreciated being a part of the holiday this year. “It was still fun to learn more about the holiday and celebrate with my AAPI family,” said Bautista.

“When I joined the community last year, it was my first time really understanding what Lunar New Year was,” Abrazaldo said.

“It was nice to be able to not only learn more about it but help create on Fordham’s campus an experience that they would enjoy. Especially during COVID, since a lot of people can’t get to their families, having that virtual component and being able to celebrate regardless of the pandemic going around I think was really important.” 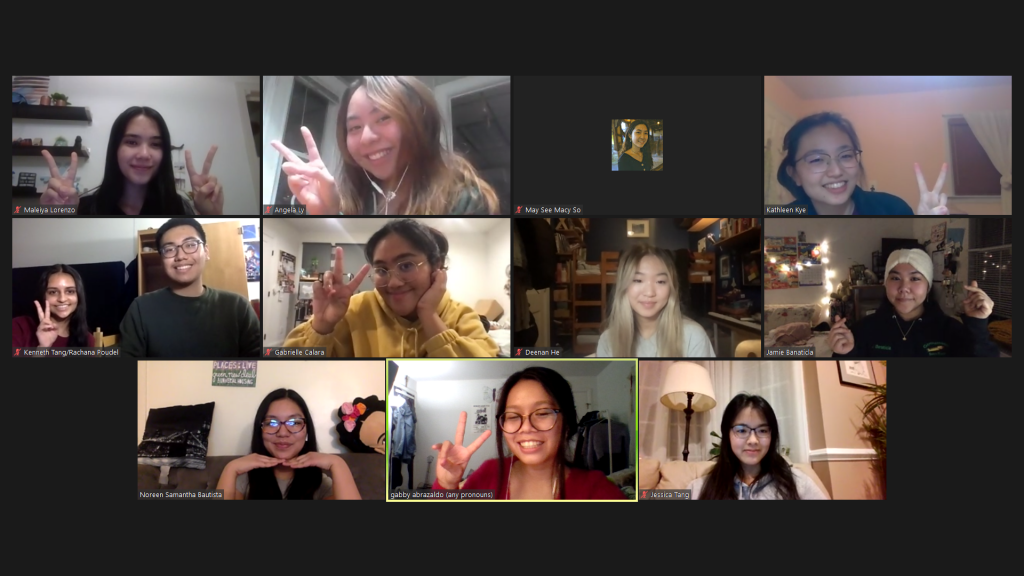