skip to main content
Return to Fordham University
You are at:Home»Arts and Culture»A Cowgirl, a Camera, and Wide-Open Spaces

When one thinks of herding cattle, one conjures an image of a Western cowhand on horseback, not a former casting director from New York City.

But that’s what Jean Laughton was 12 years ago when she left her established career to eventually become a rancher in the Badlands of South Dakota and take photos from atop her horse.

Laughton’s photography will be on display throughout the summer at the Ildiko Butler Gallery through Wed., Sept. 30. Titled, My Ranching Life, the show’s black and white prints, framed in polished repurposed wood, seem to leap off the burnt-orange gallery walls, an antidote to the usual gallery white.

Laughton’s art captures the rich landscape of ranching life, historically populated by a few men and hundreds of cattle. For a woman to find her way into such an environment is uncommon, though not unheard of, she said. 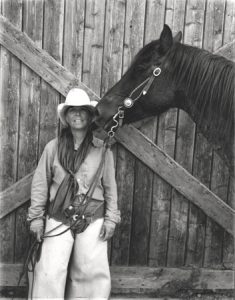 “I got into the [cattle-ranching] crew with an old-timer, someone who opened the door a bit, but I still had to earn my way,” said Laughton.

Nowadays she isn’t the only woman in ranching, but they are still by far the minority. For the most part her portraits are of men, though she does photograph women “who are real hands and working cowboys,” like Diana Elwood, whose portrait is in the exhibit.

Besides intimate portraits, there are dramatic landscapes that echo 19th-century landscape paintings or early photographs of the West. Her photos are taken while she’s at work and on horseback. Her horse’s ears often creep into the frame, adding a contemporary self-awareness to the photos.

“At first it happened by accident, but then I began to like the ears because I’m working and not just a spectator,” she said.

Laughton, a native Iowan, said that she was first drawn back to the West by the wide-open spaces as well as an earlier photo project, but she became quickly rooted to the area.

“I made the move to pursue other photography projects but had no idea about the current project until I got into ranching,” she said. “I was offered a chance to try my hand at ranching and learn to cowboy from an old timer. I started as a complete novice and I now manage the ranch.”

“After being in New York’s art scene, I went for the opposite extreme,” she said. “I’m not a ‘grey area’ kind of person.”

In a digital age, Laughton still shoots with film, and most times with a medium-format camera that creates larger negatives. She said historical photos of the West, as well as the cowboy photographers Erwin E. Smith, L.A. Huffman, and Evelyn Cameron, have influenced her.

Her photography captures art of old-style herding, she said. While nearby ranches may use vehicles to herd, there remains a substantial community of ranches that help each other out on horseback.