skip to main content
Return to Fordham University
You are at:Home»Arts and Culture»Other Passions: Ethicist Applies a Musician’s Mindset to Business

(In an occasional series, Inside Fordham looks at the passions that drive some of Fordham’s faculty and staff to excel in fields beyond their areas of work, research, and scholarship.)

Kevin Jackson, PhD, earned his first nickname, Jazz Jackson, while playing piano in his Sarasota, Florida high school stage band. His second nickname, Socrates, arrived after he replied to a question from his law professor by positing a new question.

His got his most recent nickname, Dr. J, after he sat in on piano during a live performance with his son Brendan’s progressive rock band, Crisis Team.

Jackson is a man of many talents and identities, the most visible being his role as Professor of Law and Ethics in the Gabelli School of Business and author of Virtuosity in Business (University of Pennsylvania Press, 2012). A trained classical pianist and composer, with numerous original compositions to his name (listen below), Jackson the musician performs regularly, through his company Virtuoso Jazz Enterprises, at corporate functions and at venues in his hometown Princeton, New Jersey. He also does scoring and arranging for films and new media and creates interactive performances to encourage improvisational creativity among co-workers. In 2012, he performed at a Fordham Consortium function, improvising on piano and using PowerPoint to illustrate temporal similarities between rhythmic pulses in musical scores and stock chart fluctuations.

Nowadays, the professor is exploring new ways to blend his musicianship and his scholarly pursuits. But it was a circuitous, tumultuous route, beginning when he was a middle-schooler and his teenage brother, Jay, asked his parents: “Why don’t you give Kevin piano lessons for his birthday?”

“I had this lingering paranoia that it was too late to be starting an instrument, so I practiced doubly hard,” recalled Jackson, who last month performed with his brother Jay, a percussionist, mathematician, and computer scientist, at the Rochester Fringe Festival in 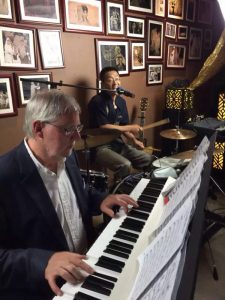 upstate New York. “I began studying at the Butler Conservatory in Sarasota.” Although he said it normally takes kids 10 years to complete the conservatory’s course, he was “so driven” by music that he went through the entire program in just one year, moving on to advanced study with Grey Perry, a master piano teacher.

Music was Jackson’s focus going into college, and he chose a rigorous jazz program at the University of North Texas (“Have you seen Whiplash?” he said. “It was that.”)

And then he took a philosophy class.

“I got so inspired,” he said, “It was a big world out there.” Just like that he changed his major.

“This is the joke on myself,” Jackson said. “I decided not to go into music because I would not find a career … and [then I]chose an even worse field—philosophy.”

Even though he found he loved the study of ethics, the nagging reality of a needing a paying profession kept interfering with his humanities pursuits. So he enrolled in law school at Florida State and studied law from a broad, humanistic viewpoint. Once he had his JD, he practiced law and went on to earn a doctorate in philosophy from the University of Maryland. Eventually, he found a perfect fit teaching law and business ethics. He has been teaching the two ever since—first at Georgetown, then at Fordham.

“Throughout all of this, I could never give up music,” he said, proud to have passed that love on to his son Brendan and daughter, Wenlan, 13, already a virtuoso violinist at the Cleveland Institute of Music.

At last month’s Fringe Festival, Jackson and his brother Jay, a professor at Rochester Institute of Technology, performed original compositions in a comedic tribute to author Kurt Vonnegut. The brothers played their music, together with a troupe of dancers and computer-generated dolphin images, from a satirical stage set dubbed Riff Raft—an “eco-friendly sailing vessel composed of discarded wine corks.”

Music has power to bring people together, said Jackson, but he sees a particular value in musicianship for the business community—virtuosity. In this case, it consists of applying the discipline of musicianship to practicing business. And it’s an idea that goes back to ancient thinkers, he said.

“Plato thought that music shapes the soul. And there is a lot to that,” said Jackson. Virtuosity, he said, is a musician’s self-imposed discipline to master technique first and carry it forward to perfection. Many businesses could learn from this way of thinking, he said.

“So many businesses just treat law as something to either ignore or to do the bare minimum necessary to comply with,” he said. “But the musician’s mind thinks in terms of very high standards . . . seeking something so perfect, and so excellent.

“I want to encourage this way of thinking and to explore its implications,” he said. “[And] to imagine what if business could be more like music—a self-regulated enterprise, a collaborative, creative venture bringing people together in joy and celebration?”