skip to main content
Return to Fordham University
You are at:Home»Arts and Culture»On the Question ‘Must One Be Faithful,’ French Students Display Perfect Eloquence
Contest winners (from l to r) are Isabelle Mohi, Fordham; Chelsea Jean-Michel, Columbia; Victor Rodriguez, Fordham; Vanessa Zhou, Fordham; and Sal Volpe, Columbia.
On April 20, Fordham undergraduates took top prizes in the second annual Prix d’éloquence, a competition of words and ideas, all in French.

Organized by the Department of Modern Languages and Literatures, the event promotes the French language and allows students to engage in the Jesuit tradition of eloquentia perfecta—in a foreign language. 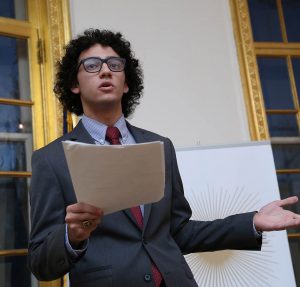 Before a large audience at the Cultural Services of the French Embassy, 18 students from Fordham and Columbia University had three minutes each in which to present their responses to the question: “Faut-il être fidèle?” Or, Must One Be Faithful?

The students tackled the question from a variety of angles, considering the importance of fidelity in terms of family, friendships, romantic relationships, politics, religion, and also one’s own ideas and beliefs.

Of five winners, three were from Fordham—Victor Rodriguez, Vanessa Zhou, and Isabelle Mohi. The trio took 1st, 2nd, and 5th place, respectively, for their sound and engaging arguments, mastery of French, and the vivid expressiveness of their delivery.

Zhou, a sophomore, and Mohi, a freshman, were enthusiastic about participating. “It was great,” said Mohi. “Writing my response helped me a lot with my French.”

Rodriguez, a freshman who is Puerto Rican, captured first prize by speaking passionately about economic inequalities faced by his country.

“I just felt like I had one chance to say something in a different language. I should bring light to the fact that in different languages we can say the same thing about a real plight, and no matter what person is hearing it in whatever language, you can really identify,” Rodriguez said.

Prizes for the winners included cash gifts, a year’s subscription to the French Institute Alliance Français (FI:AF), and gift certificates.

While the public speaking task would be a difficult one in English, all the competitors executed it after just four semesters of French study—a core requirement for all Fordham students.

Andrew Clark, PhD, professor of French & Comparative Literature and chair of the Department of Modern Languages and Literatures, inaugurated the Prix d’éloquence in 2015 to give students invaluable experience in bringing their French skills into the real world.

“When you’re in a classroom, your interaction with the language is kind of artificial in a certain respect,” he said. “You respond to certain questions, you read certain texts.

“To see people laughing, responding, interacting with what they’re saying gives the students a sense of the life of the language beyond them.”

Other sponsors of the event included the Deans of Fordham College, the French Embassy in the United States, French Morning, FI:AF, Albertine, Almondine Bakery, and Sorteer.com.