skip to main content
Return to Fordham University
You are at:Home»Arts and Culture»Identity and Race at the Heart of the Mainstage Season’s Plays, The Owl Answers and Sun

Human rights activist Malcolm X and a young black girl seeking her dead white father are the focuses of the two short plays opening on Feb. 24 at Fordham. The plays—The Owl Answers and Sun—by renowned African-American playwright Adrienne Kennedy will be the third production in the theatre program’s 2015-16 Season at the Mountaintop.

Director and associate professor of theatre Daniel Alexander Jones offers an inside look at the upcoming performances. 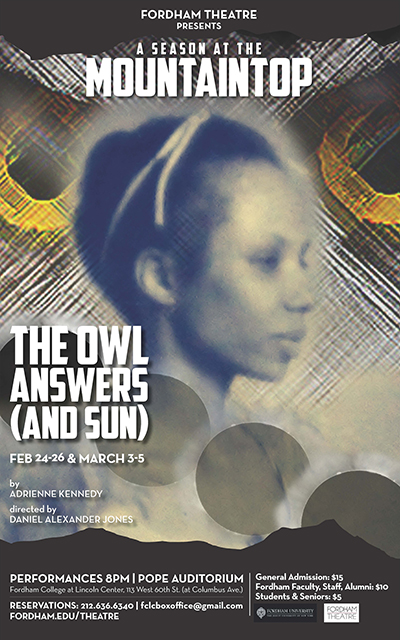 Tell us about The Owl Answers.

DANIEL ALEXANDER JONES: Owl Answers was written in the early 1960s. It’s a play about a young black woman named Clara Passmore who is trying to reconcile an identity that has been fragmented by her conflicts around race. She is trying to get access to the body of her dead father, “the richest white man in the town,” but she is deemed a “bastard” and denied entry by three ghostly apparitions from English history—William the Conqueror, Shakespeare, and Chaucer. The play theatricalizes Clara’s mind as she tries to reconcile the warring aspects of her identity and her experience in society.

Each actor plays several characters. How do these multiple identities function in the story?

DAJ: Kennedy depicts something we all feel: within one person are many states of mind. We walk around with different selves, different parts of our own experience, and different people who have influenced us. Kennedy is able to articulate the vast, complex inner world that we all possess in the midst of a chaotic outer world … The play is quite beautiful and the writing is incredibly lyrical. It makes us feel as if we’re living inside of a dream.

Tell us about the second of Kennedy’s plays, Sun.

DAJ: Kennedy was commissioned to write Sun after Malcolm X’s assassination in 1965. The play was written as a monologue, but we’ve decided to stage it with three actors playing three different aspects of Malcolm. One actor plays Malcolm during his Nation of Islam years; another plays him during his hajj to Mecca; and the final actor is Malcolm on the day of his assassination … the monologue reflects the splitting of his consciousness into different parts.

The students give fantastic performances. It challenges them because it’s such a different style of acting. The best way to describe it is learning classical music versus learning jazz. We’re asking them to play jazz. But every one of them has been incredibly courageous in dealing with these works. One hopes that the students here who are learning their craft have opportunities to stretch themselves in a number of different directions, and this is an unusual play to do in a college setting, not because of its subject matter, but because of its style.

How do these plays confront current issues about racial justice?

DAJ: These themes are incredibly timely. Both plays speak to our country’s continued struggle to reconcile with our history and with its psychological and spiritual impact. Something as violent and potent as an assassination of a figure—like Malcolm X—is, to me, a correlate to the many highly publicized killings we’ve witnessed these last few years. The plays speak to our inability to make ourselves whole as a nation.

On March 3 you are hosting a free reading of Kennedy’s autobiography. Can you tell us more about that event? 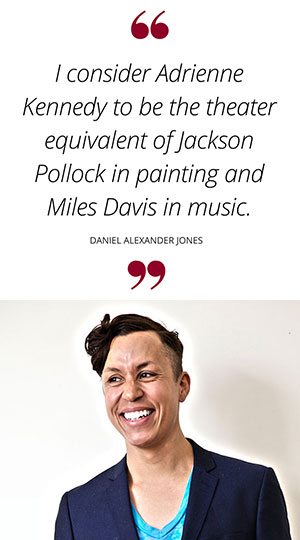 DAJ: We’re doing a reading from her autobiography, People Who Led to My Plays, to both celebrate Kennedy and acknowledge the book’s [29th anniversary] reprinting. The book is a collection of short entries based on everything and everyone who inspired and shaped her as a writer, including people, characters, films, pieces of music, and political and historical figures.

The reading will be performed by four New York-based performers: Obie Award-winner Eisa Davis; Rhonda Ross, [who is the daughter of Diana Ross and Berry Gordy]; Stacey Robinson; and Helga Davis.

I consider Adrienne Kennedy to be the theater equivalent of Jackson Pollock in painting and Miles Davis in music. She is one of our most important playwrights in experimental dramatic structures, and her writings are artistically rigorous as she deals with some of our deepest traumas as a country.

Visit the theatre program’s webpage for details about tickets and the special events and lectures occurring alongside the production.